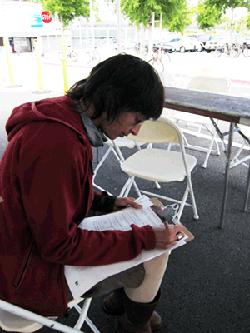 Carrie Harvilla fills out a survey

A large majority of riders are telling BART they would give up 2 inches of seat width in exchange for wider aisles.  The wider aisles are designed to make it easier for customers on crowded trains to get to the train doors to exit.  Wider aisles also will make the new cars more spacious and comfortable for standees during peak periods.

BART is hosting seat labs to gather public input on the project to replace its entire fleet of train cars, the oldest in the nation, with the Fleet of the Future.

"It's totally OK to get a little bit closer if it means more space to accommodate people," Carrie Harvilla, a BART rider who toured a seat lab Thursday in Union City, said as she filled out a survey.

BART's current seats, at 22 inches, are among the widest of any transit system.

In a recent seat lab controlled for random sampling, about 90% of those surveyed said they found 20-inch-wide seats acceptable. Those customers picked wider aisles at the expense of slightly narrower seats, which would still be fairly wide relative to others in the industry.  "I prefer the width of the current seats, but I understand that there are tradeoffs to be made," Christian Schultz, another visitor to the Union City seat lab, added.

A design with wider aisles could make it easier for people to get on and off trains efficiently, with the potential to get trains in and out of stations more quickly. Another benefit would be better accommodation for people with disabilities. Robin Guild, who toured the seat lab in Union City and who uses a wheelchair, said wider aisles would make things easier for him. 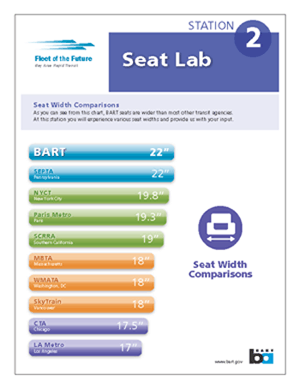 Other findings of the controlled sample were that 63% preferred forward-facing to sideways seats; 97% found 27 inches of legroom acceptable (compared to 29 inches currently); and respondents rated cleanliness at 6.28 and comfort at 4.88 on a scale with 1 being "not at all important" and 7 being "very important."

Armrests were a toss-up with 49% preferring no armrests and 36% wanting armrests, within the margin of error making it about equal. Download the complete survey results.

The results of the randomized sample will be tracked against results coming in from a series of demonstrations for the general public, featuring a mini version of the seat lab. The mini version of the survey includes questions about seat width; armrests; accommodations for bikes, luggage ands strollers; passenger information; seat materials; and other design ideas.

Anna Sanchez was thinking about needs of parents as she pushed her baby in a stroller down the seat lab aisles while her two older children, ages 10 and 8, helped fill out the survey.  "We ride BART every day, Monday through Friday," she said. "I wanted them to come out and see this because they'll be riding BART when these new trains get here." The seat labs are just one of the ways BART is gathering public input.

In addition, BART is collecting email feedback, with more than 1,000 comments already received from the public. (Submit yours here). The general public seat labs already have collected around 1000 surveys. Earlier versions of the seat lab sought comments from groups of riders with specific concerns, such as riders with disabilities, senior citizens and bicyclists. Another version was the controlled sample described above.

The feedback will be shared with industrial designers, who will use it to come up with three renderings that incorporate the most-requested features and try to balance tradeoffs for the best possible interior design. Then, later this summer, there will be another round of public input on those three models. Based on that public input, BART will give design guidance to the company that ultimately will build the train cars. Five builders have submitted proposals for the job.

Sign up to receive updates on the Fleet of the Future, or submit your feedback, at www.bart.gov/cars.