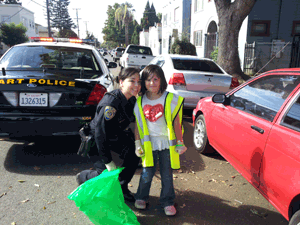 "The simple act of volunteering to spruce up the streets helps to build a sense of community between BART and the neighborhoods we serve," Raburn said.

The costumes were all donated by BART Police Department staff, other BART employees and Bay Area residents who learned about the effort from Community Service Officer Lauren LaPlante, BART’s Community Policing coordinator. LaPlante collected costume donations for children who attend the annual Fruitvale pre-Halloween party spearheaded by Ortega, who also organized this year’s clean-up efforts.  After experiencing the warm appreciation the kids showed to BPD officers in past Halloween parties, LaPlante was inspired to solicit the donations.  “Typically, your child will outgrow his/her costume, so why not donate these ‘preowned’ costumes to kids who would really get a kick out of using them again?” LaPlante explained.

This is BPD’s third year to volunteer at Fruitvale’s celebration but the first year to pilot the costume giveaway.  “In past years, the children expressed such happiness when we simply passed out candy, we thought we’d add a special treat by supplying costumes in time for Halloween,” BART PD spokesperson Lt. David Chlebowski said. “We weren’t disappointed.  The children at the party were overjoyed to get these Halloween surprises—their expressions were priceless!”

BPD intends to continue the costume gathering effort as one of the many charitable efforts it participates in throughout the year.