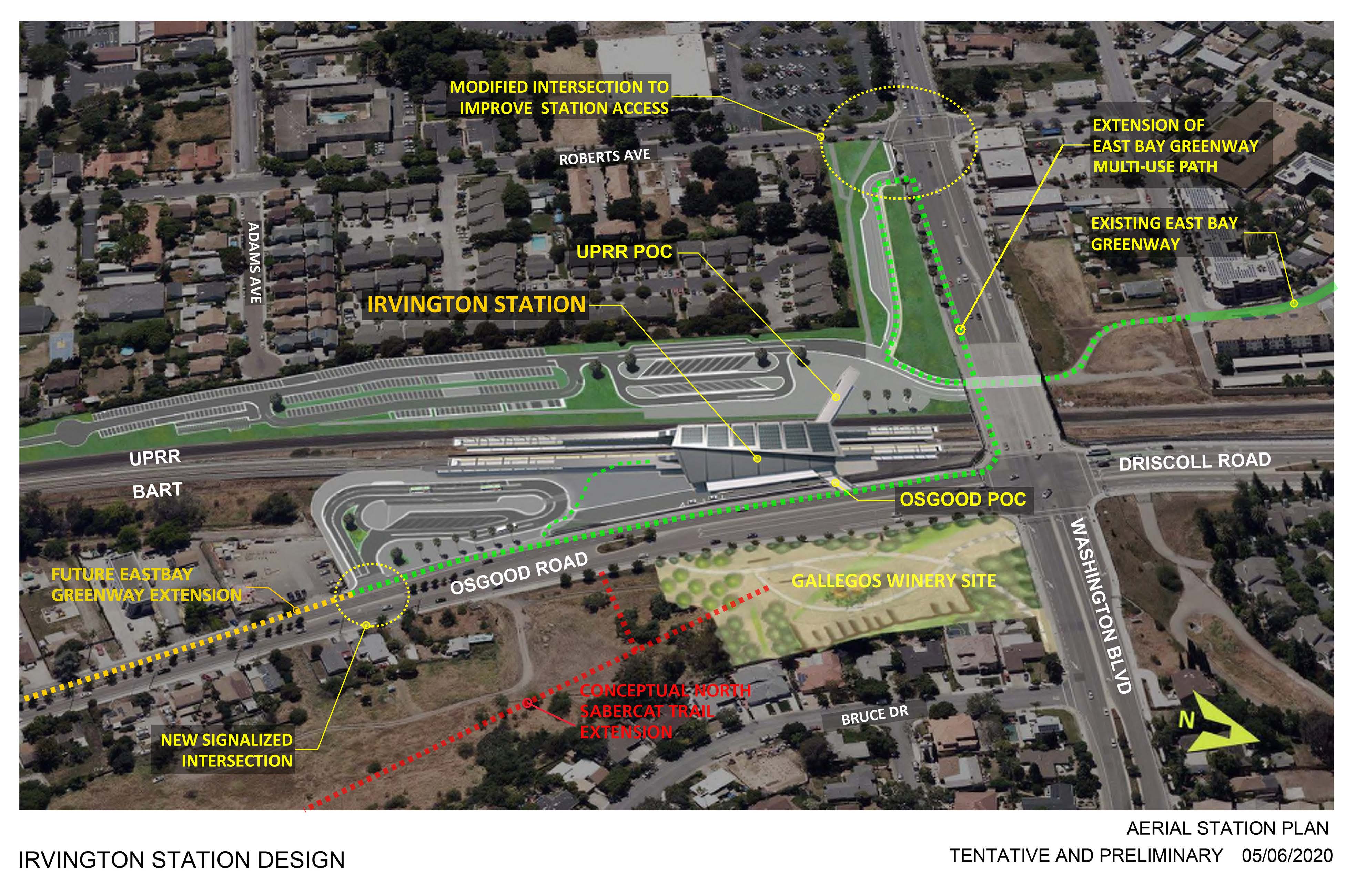 Updated August 6, 2020 - The BART Irvington Station Project Team, which includes several consulting firms led by PGH Wong Engineering, has spent the last year performing Preliminary Engineering for the Irvington Station. Utilizing the updated Irvington Station Site Plan approved by the BART Board in August 2019 as a starting point, the initial phase of this effort was largely aimed at site reconnaissance, including soil sampling and surveying. Simultaneously, the Project Team coordinated with nearly every department within BART, and gathered input from external stakeholders such as the City of Fremont and the BART Bicycle Task Force to help inform the design with respect to function, patron experience, and integration with the surrounding neighborhood. After compiling the information gathered, the Project Team formulated a basis of design and began developing the station architecture, with the ultimate goal being a compact yet inviting station that will compliment instead of dominate its surroundings.

The next phase of the Preliminary Engineering effort was to develop a set of 30% design plans. The set includes preliminary architectural, structural and civil design drawings, as well as preliminary drawings for all the electrical, communication and other systems necessary for a functional station. Since the Irvington Station will be built around operating BART tracks, detailed construction staging plans were also prepared to help ensure a constructible design.

With Preliminary Engineering now complete, the Project Team is beginning Final Design. During this stage, the design will be further refined and details developed, reflecting ongoing input from our stakeholders. One or more artists will also be engaged, and the public will be given an opportunity to meet them and share insight on what makes the Irvington community, and Fremont in general, a special place to live and work. Final design is anticipated to take approximately two years. 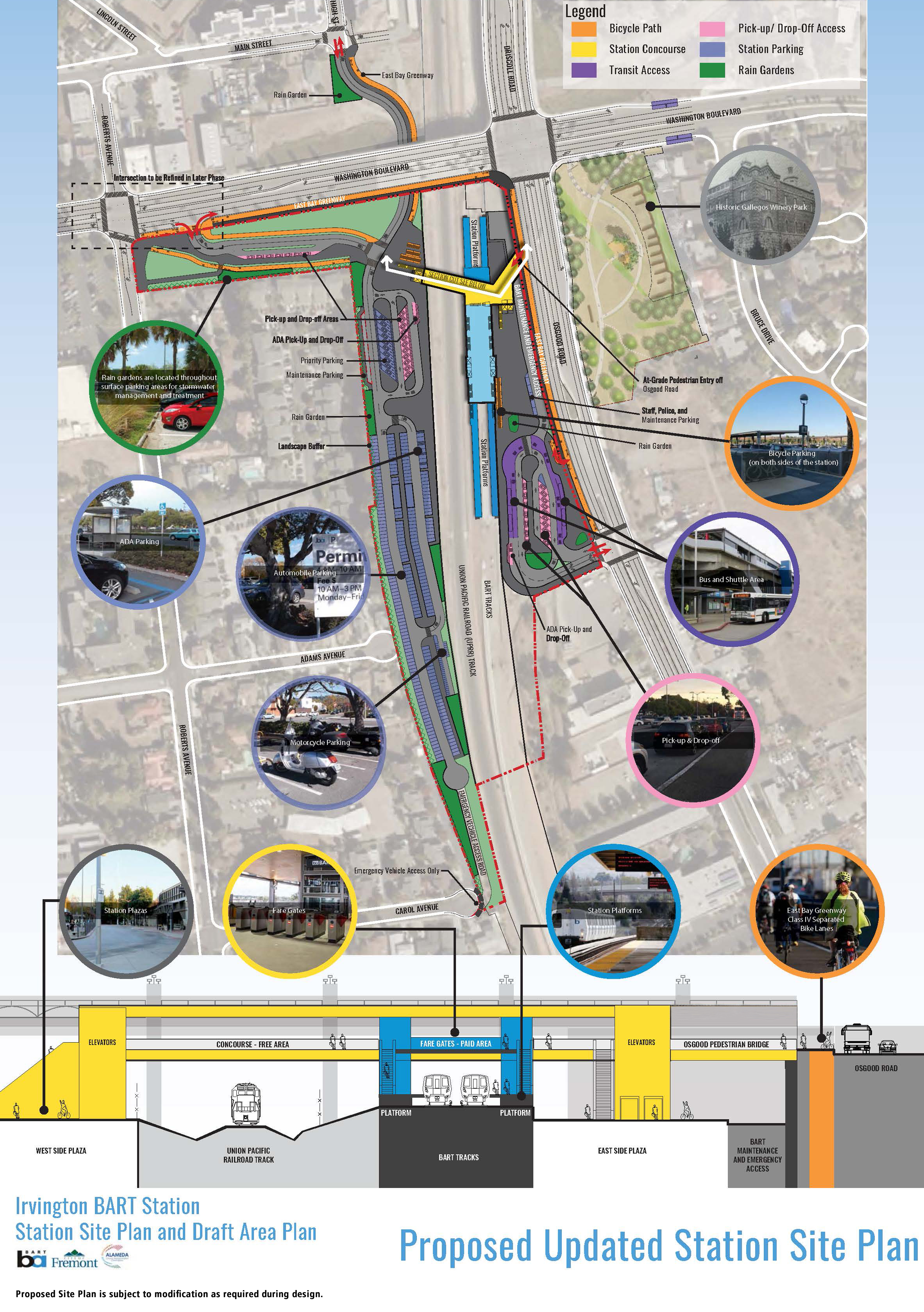 On August 22, 2019, the BART Board voted to adopt Addendum 2 to the BART Warm Springs Extension Final Supplemental Environmental Impact Report (FSEIR) and the associated updated Irvington Station conceptual site plan shown below.  These updates were generated to reflect the latest BART policies, priorities and requirements, as well as feedback received from the community.  The end result is a more compact, neighborhood-friendly station than what was previously adopted in 2003.   Among the most notable changes are the following:

In addition, the updated conceptual site plan included the integration with the East Bay Greenway, a trail currently being developed that will eventually run from northern to southern Alameda County.  By allowing the Eastbay Greenway to run through the station site, pedestrian and cyclist access to the station is significantly enhanced.

To address environmental mitigation measures first described in the Warm Springs Extension FSEIR, the project will undertake efforts intended to preserve and interpret the Gallegos Winery ruins located at the southeast corner of Osgood Rd. and Washington Blvd.  Pedestrian walkways, interpretive panels, landscaping plantings and bench seating will also be added at various locations, so that following the transfer of title from BART to the City, the site would be suitable for adoption as a passive park in recognition of this fascinating piece of Fremont history.

The updated conceptual site plan, its environmental analysis per the California Environmental Quality Act (CEQA), the Station Area Plan, as well the preliminary engineering work currently underway have all been made possible through 2014 Measure BB funding that has been allocated by the Alameda County Transportation Commission (Alameda CTC).

A link to Addendum 2 of the Warm Springs Extension FSEIR can be found here. 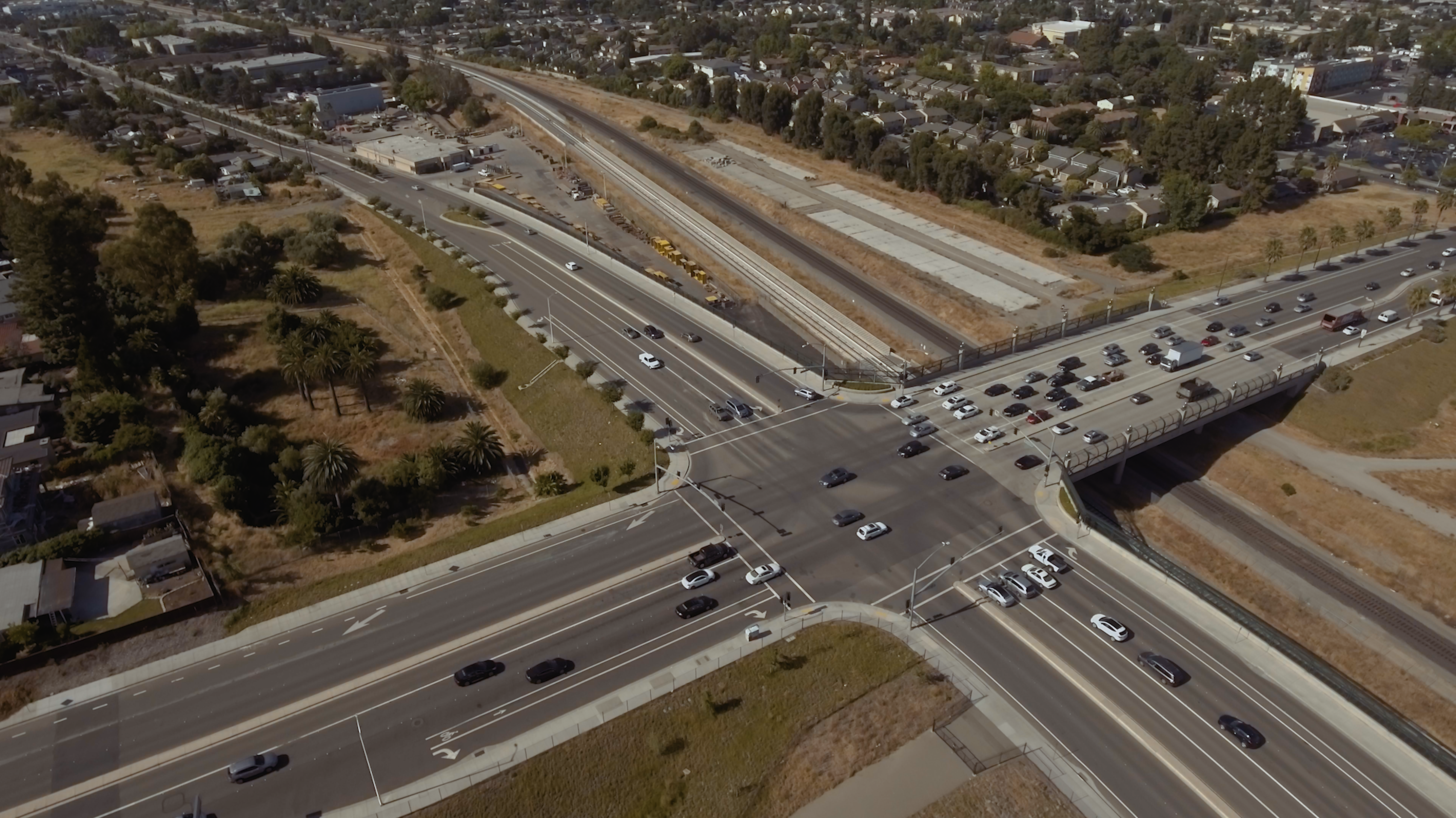 Updated August 8, 2019 - Since first conceptualized in the late 1970’s, the BART extension to southern Fremont was intended to include two stations – one in the Warm Springs district and one in the Irvington district of Fremont.  However, by the late 1990’s, it became doubtful that sufficient funding could be identified to construct the entire two-station extension as originally envisioned.  By the time Alameda County voters passed Measure B in November of 2000, the Irvington Station was considered to be an optional station, which would be added if and when funding could be identified by the City of Fremont.  The City of Fremont and BART have continued to work together since then to make the Irvington Station a reality.  In 2011 the City was prepared to pay for the station with Redevelopment funding, however that plan was thwarted when the State of California eliminated Redevelopment Agencies statewide.

In 2014, Alameda County voters approved Measure BB, which allocated $120 million towards a station at Irvington.  This funding would come too late to include Irvington Station as part of the extension to Warm Springs/South Fremont Station that opened in Spring 2017, however, provisions to facilitate future construction of the Irvington Station under operating conditions were included in the extension project

Over the past two years, the Measure BB funds allocated by the Alameda County Transportation Commission have been hard at work to update the conceptual station site plan to reflect current BART policies, practices and standards, as well as input from the community and other project stakeholders.  Proposed changes to the 2003 conceptual site plan will be addressed, per the California Environmental Quality Act (CEQA), in an addendum to the Warm Springs Extension project EIR/SEIR.  The revised project and the CEQA addendum will be presented to the BART Board of Directors for adoption. This action is currently scheduled for August 22, 2019.

Located halfway between Fremont and Warm Springs/South Fremont stations near the intersection of Osgood Rd and Washington Blvd, the Irvington Station will be relatively small in scale, providing a neighborhood feel that emphasizes pedestrian, bicycle, bus and auto pick-up/drop-off access and minimizes automobile parking and resulting traffic impacts.  The station project will also include construction of the East Bay Greenway bicycle trail within site boundaries, as well as the stabilization and protection of the historic Gallegos Winery ruins, bringing that site up to City park standards.

With the conceptual and environmental updates nearly complete, the next step is to begin design.  Preliminary engineering will advance the design to 30% completion and will take approximately 14 months to complete.  Final design, right-of-way acquisition, procurement and construction are expected to follow with a goal of opening Irvington Station in late 2026.

For addition information, visit the Warm Springs Extension Project Overview or the City of Fremont's website.

BART Receives Responses to Request for Qualifications - May 2010