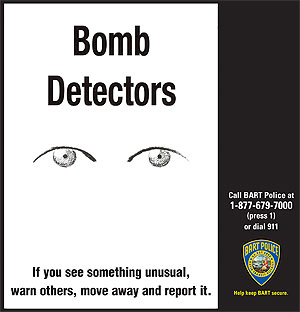 Attention-getting posters similar to those used in london

BART is renewing its effort to make passengers aware that they play a key security role by launching a bold new anti-terrorism campaign.

BART Director Lynette Sweet, who chairs the agency's security committee says, "What makes the new BART campaign bold is its simplicity, yet directness. It uses words we probably wouldn't have used several years ago."

PUBLIC AWARENESS KEY ANTI-TERROR MEASURE
BART has long been a transit industry leader in security and the new public awareness campaign is just one step the agency is taking to ensure the safety of its 310,000 daily riders. "We constantly review, upgrade and improve our security measures but we need the public's help to make BART a hostile environment to criminals," says BART General Manager Tom Margro. "This new campaign is designed to remind riders that we welcome and encourage their assistance."

In addition to the new posters, BART is also publishing a new "Transitwatch" brochure detailing what constitutes suspicious behavior or items and the specific steps passengers should take if they encounter someone or something that could be a threat.

The new posters and brochures will be arriving in stations and trains in the coming days. This is the third poster in BART's "Eyes & Ears" anti-terrorism campaign, which started in August 2002. It was updated following the March 2004 Madrid bombings to remind riders to look out for unattended bags or packages.

BART USES MULTIPLE COUNTER-TERRORISM MEASURES
BART has been on a heightened state of alert since the July 7, 2005 attacks in London. Today BART Police Commander Maria White outlined some of the agency's more visible anti-terrorism measures, including bomb sniffing dogs and the BART Employee Station Team (BEST) patrols. The BEST patrol program increases surveillance by deploying administrative workers in iridescent vests to walk through stations and platforms to assist BART Police Officers. All BART frontline employees have received extensive training on how to react to emergencies. In addition, BART is working with many outside agencies on security drills and the latest detection devices for various chemical or biological agents BART officials stress there is no credible information that BART is threatened. They are taking anti-terrorism steps as a precaution and to reassure riders.