As more Fleet of the Future trains go into service, BART is planning what to do with the fleet of “legacy” train cars that have served the Bay Area, many of which date back to the start of BART in 1972.

There is lots of public interest in what will happen to the old train cars with suggestions they be donated to museums, turned into homeless shelters, tiny homes or cafes, used for educational purposes or sold off as scrap metal.

The BART Board of Directors got a presentation of early plans for the fleet decommissioning at its Thursday, Jan. 10, 2019, meeting. The agenda item was for “information only” and did not require a vote or any action by the Board.

The decommissioning is a complex process because BART will operate a mixed fleet of new and old cars for several years. The new and old cars can't join together in one train, but there will be full train sets made up of new and old cars running simultaneously. This will require balancing the operational need to expand service and lengthen trains, the Fleet of the Future delivery schedule, managing storage for all the train cars and deciding how and when to retire the legacy cars.

It is anticipated BART's capacity to store the growing fleet will begin to max out on early 2020 as Fleet of the Future delivery ramps up. The entire legacy fleet retirement is expected by the end of 2023.

The Federal Transit Administration requires that after the useful life of federally assisted property is reached, rolling stock may be sold. If the property was funded with FTA-assistance and is determined to have a market value that exceeds $5,000 per unit, the FTA is entitled to reimbursement in an amount calculated by multiplying the current market value, or net proceeds from sales, by the FTA’s percentage of participation in the cost of the original purchase.

This calculus is important because BART must exercise sound financial stewardship over the process. For example, in the sale of a single train car valued at $10,000 that originally received 70% of its funding from the FTA, BART would be required to pay the FTA around $7,000. Even if that train car was donated free of charge, the FTA would still have to be paid its $7,000 share, putting BART out of pocket for that money.

In summer of 2019, BART plans to decommission the first 10 legacy cars as a pilot to determine their market value, which will set the precedent for the agency's federal commitment moving forward. 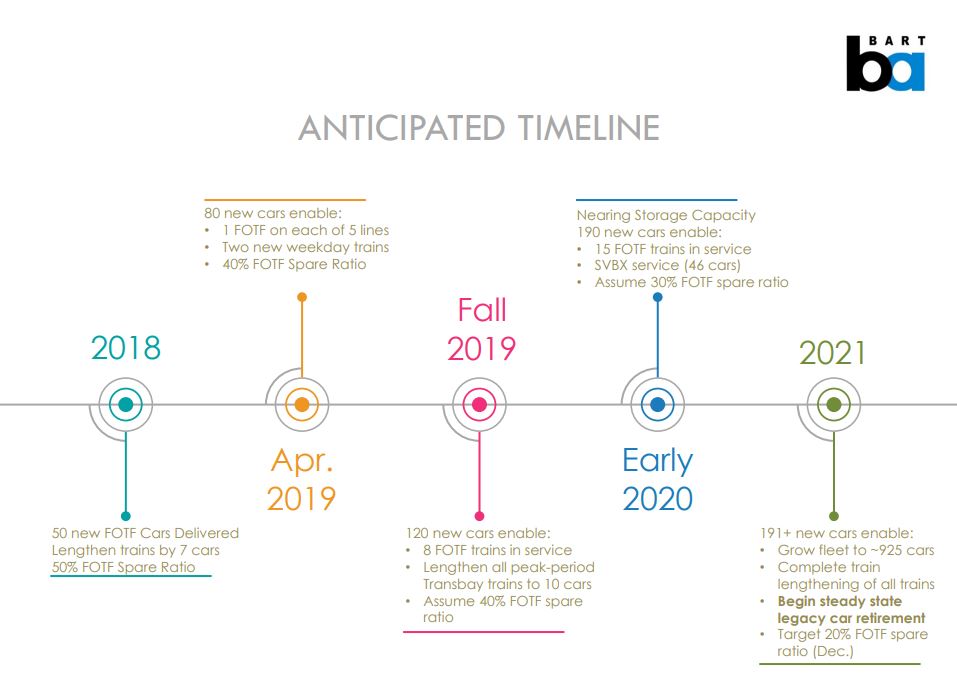 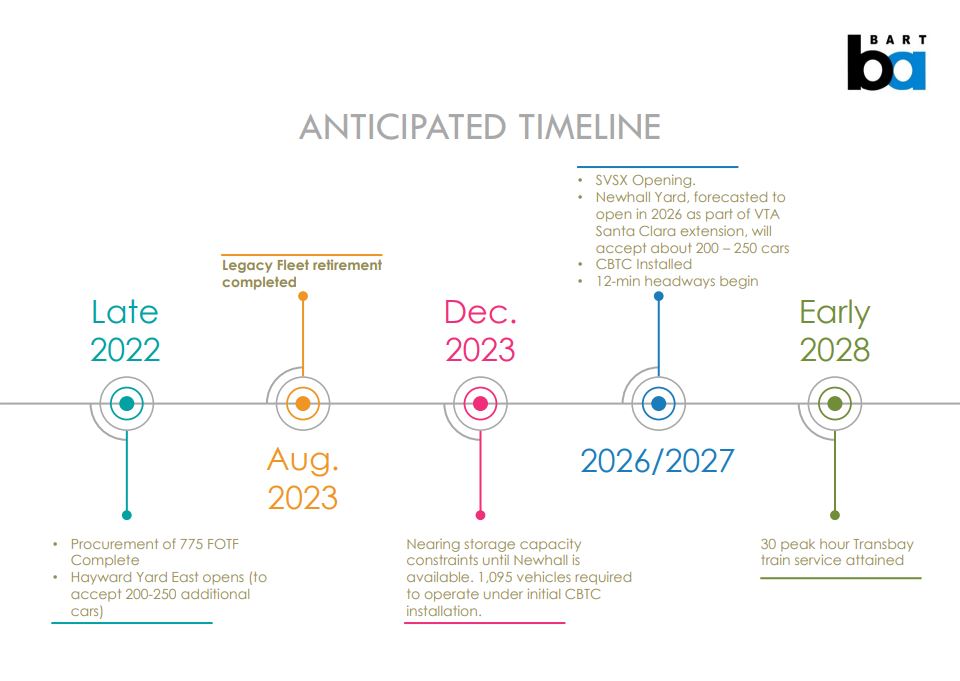 The car selection criteria for decommissioning will take into consideration the following, at a minimum:

The Fleet Disposition Team will manage the process, including selecting which parts should be harvested from retired vehicles and choosing which cars with the highest failure rates get retired first.

Financial Planning stakeholders will ensure that FTA financial commitments have been met and receive any sale or scrap value into the General Fund. The Procurement Department will assist with disposition of cars, such as advertising them for sale and negotiating with external vendors. Legal will ensure legal compliance, and marketing will outreach to provide information and engage the public on what should be done with the old cars.

Some ideas that have caught the public’s eye in other places aren’t a good fit for the BART fleet. As an example, some carbon steel subway cars from other systems have been sunk into the ocean for use as part of an artificial reef, but the aluminum composition of BART cars prevents this from being feasible. Some agencies can sell off their train cars to be reused by other systems; BART, however, operates on a non-standard gauge or track width that wouldn’t work in most places.

If you’d like to share ideas and suggestions on what should be done with the legacy fleet cars or if you would like to put in a request for one, please visit bart.gov/contact.