Continuing its commitment to sustainability, BART worked with Bombardier to take a lifecycle approach—ensuring that the train cars reduce energy use, pollution and costs, not only during their useful life but during the production stage and after the new train cars are eventually retired. 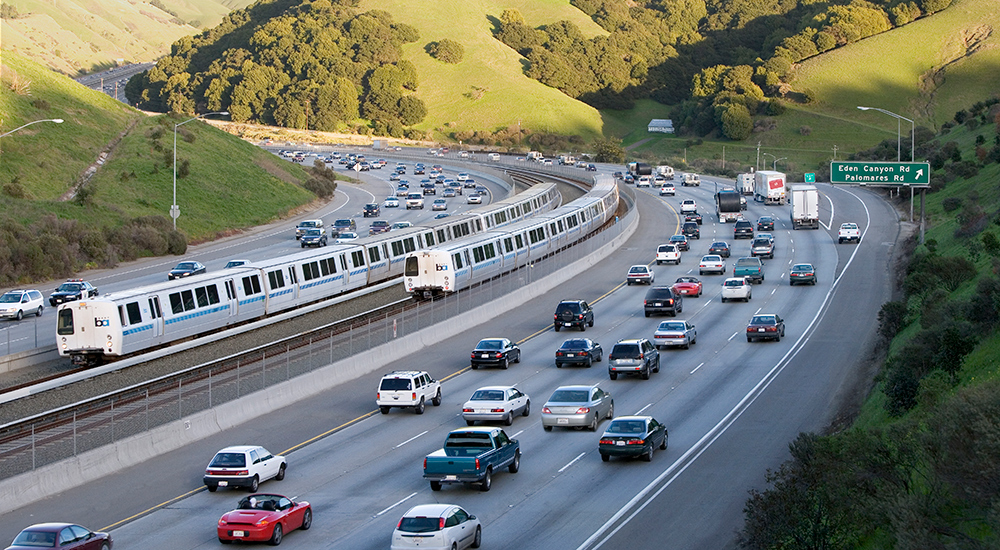 BART's infrastructure requires the train cars to be extremely lightweight. To meet this requirement, most of the exterior of the new train cars is constructed out of aluminum. Aluminum is abundant, doesn't rust, and when properly finished, reflects heat and light, keeping the train cars cool. It is lightweight but strong, yet fairly easy to work with, reducing the energy investment during the manufacturing process. Additionally, aluminum is easily and readily recyclable, making it very low impact when the train cars are eventually retired and dismantled.

New train seats have sustainable properties. The seats are 74% recyclable by weight due to steel and aluminum components.

Because BART train cars are so lightweight (weighing 15,000-20,000 lbs. less than a Washington Metro car, for example) they use significantly less energy over their life cycle.

Furthermore, in addition to the natural heat and light reflection properties of aluminum, each train car is equipped with a white roof that will deflect heat and light away from the interior of the train. The white roof will help lessen the load on the interior cooling system, keeping passengers comfortable and decreasing energy consumption.

In order to save heating and cooling energy in the cars, the new train cars are equipped with an energy saving mode, during which time doors will open at stations only when a passenger is standing in front of them. By opening doors only when necessary, the energy saving mode will help reduce the amount of lost heat or A/C from the cars. The doors will have redundant sensors to detect persons wishing to enter or exit the train.

The new train cars use LED lighting, eliminating the need for fluorescent lamps which contain mercury gas. LED lights are extremely efficient and long-lasting, making them ideal for use inside train cars. The low profile of LED lights also allows BART and Bombardier to conserve space and maximize ceiling height in the aisles of the cars.

Since LEDs contain no glass components, they are less vulnerable to breakage than conventional light bulbs and are well suited for use inside a moving vehicle. The lighting system senses the amount of available sunlight in each car and adjust lighting intensity automatically, saving additional energy.

BART challenged Bombardier to build trains that are at least 7% more efficient than the current trains.

While the new trains are more efficient during acceleration and maintaining speed, they gain most of their efficiency by improving the regenerative braking system that the trains currently use. BART trains convert their kinetic energy of motion into electrical energy as the trains slow down. The energy regenerated during this process is returned to the power distribution system where it is used by other trains.

Just one commuter using BART each weekday instead of driving saves over 360 gallons of gas and 7,000 pounds of CO2 in a year.

BART trains are 100% electric, with over 97% of that power coming from zero and low-carbon sources including solar and hydro energy. BART is increasing its use of low-carbon, zero-carbon and renewable energy sources, with the goal of transitioning to 100% carbon-free by 2035 and 100% renewable energy by 2045. See more at bart.gov/sustainability.