REQUEST FOR EXPRESSIONS OF INTEREST (Updated 12/1/20)

BART is seeking to obtain feedback and input from interested fare gate providers on solutions that maximize features of off-the-shelf products through a Request for Expressions of Interest (RFEI). This RFEI is intended to allow the parties to share information related to BART’s Next Generation Fare Gates Project. As part of this effort, BART is assessing the potential benefits, challenges, and feasibility of a number of alternatives. The assessment includes examining the following:

Answers to questions in the RFEI will assist in completing BART’s assessment of alternatives.

(UPDATE 10/13/2020) BART released an addendum to the RFEI on October 9, 2020. The addendum pertains to references in the RFEI related to non-disclosure agreements. Firms that requested and received the RFEI on or prior to October 9, 2020 were provided a copy of Addendum No. 1.

Fare evasion costs BART between an estimated $15 million and $25 million each year. This is lost revenue that cannot be reinvested into improvements to the system for all riders. Concerns about fare evasion have increased calls for new fare gates and station hardening which is changing infrastructure other than the fare gates to prevent fare evasion.

On September 26, 2019, the BART Board of Directors voted unanimously to adopt a swing style barrier gate design as the standard design for new fare gates.

BART’s funding proposal includes a mix of BART funds and working with the counties to reprioritize county funds programmed for BART projects such as station modernization as well as identify new funding opportunities.  BART will also look to use voter-approved Measure RR Access Program funds to support part of the costs of the fare gate replacement program.

On May 30, 2020, a newly designed accessible fare gate prototype was installed at the Richmond Station to test BART’s next generation of faregates.  The new design is the result of months of innovation by BART staff that has reduced the cost estimate for replacing 600 fare gates across the system from $150 to $90 million, a 40% savings.

The prototype gate includes two 5-feet high swing style barriers that discourage users from pushing through, jumping over, or maneuvering under the gates. These are first-of-its-kind pneumatic swing style barriers.  The barriers are operated with air pressure instead of a motor.  There are fewer moving parts and the gates can apply as much pressure as necessary to discourage someone from pushing the barriers open.  The prototype can process a minimum of 30 riders per minute which is a required benchmark to ensure riders can quickly move through our stations.

On September 25, 2020 the new swing style accessible fare gate was installed at the Coliseum station in front of the elevator to bring the elevator into the paid area.

On October 30, 2020 the new swing style accessible fare gate was installed at the Concord station in front of the elevator to bring the elevator into the paid area.

A presentation was given to the Board of Directors on June 11, 2020.

An update on the next generation fare gate plan was given to the Board of Directors on December 3, 2020.

The Board of Directors received a subsequent update on the funding and implementation plan on June 10, 2021. The presentation also lays out details of the technology being used, timeline, and next steps.

Here is a picture of the accessible fare gate prototype installed at Richmond Station: 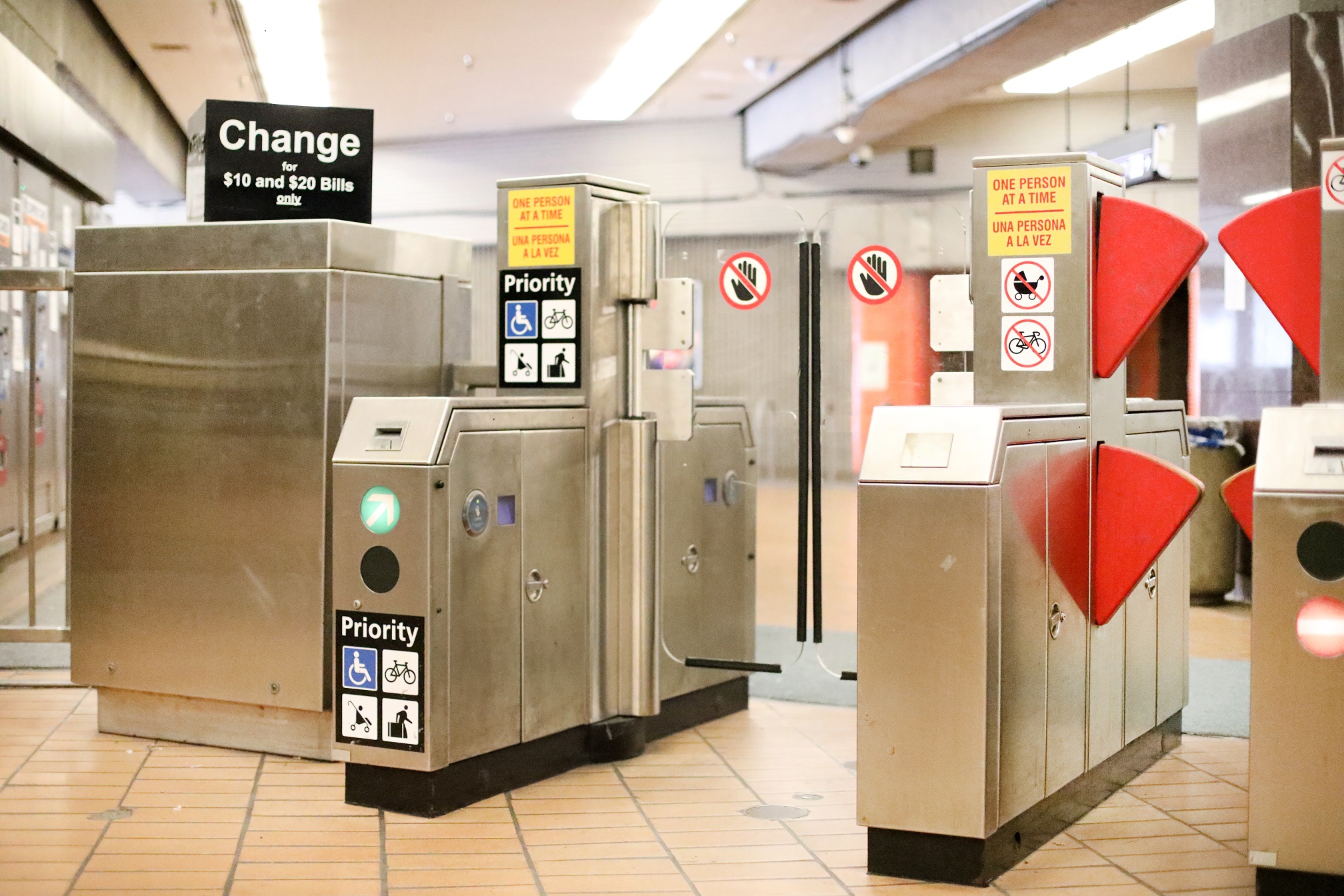 Here is a picture of the accessible fare gate prototype installed at the Concord station to bring the elevator into the paid area: 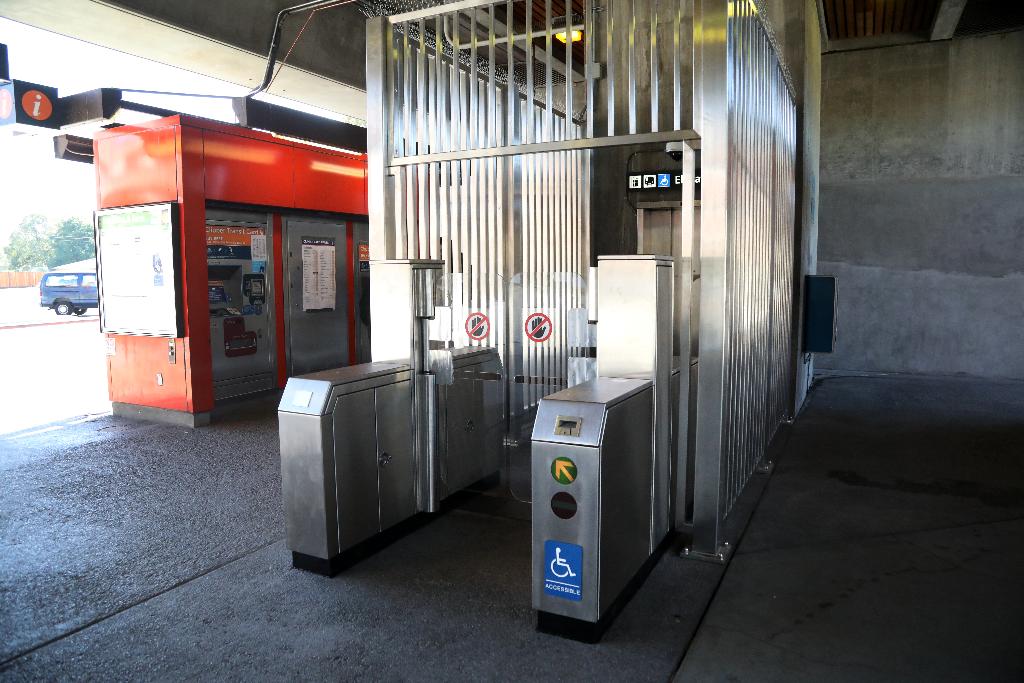 BART held a public Board of Directors meeting in May 2019 where staff presented plans to test two modifications to current fare gates. These modifications, designed to deter the ability to push through or jump over fare gates, would cost significantly less than replacement.  Modified gates could also provide an interim solution while funds are secured for a wholesale replacement program. The modified gate designs were reviewed by a safety engineering consultant.

When making these changes we design for safety including ensuring that we are not creating unsafe conditions for persons with mobility limitations. We conduct appropriate analysis and testing prior to implementation in public spaces.  We also conduct operating environment tests, sometimes referred to as pilot tests. Field locations are selected based on station configuration, ridership patterns and feedback from frontline employees and BART Police.

In Winter 2018, BART retrofitted existing fare gates with a modification that applies pressure to fully closed gates, making it very difficult for anyone to push through the gates. This concept was piloted at Embarcadero first.  The modification is designed such that the fare gate leaves close at normal pressure to ensure that there is no new risk to customers. Once fully closed the additional pressure is applied to prevent would-be fare evaders from forcing the gate open. To date this modification has been fully implemented at all downtown San Francisco stations, as well as 16th Street, 24th Street, Glen Park, Balboa Park,Richmond, Coliseum, Fruitvale, Pittsburg Center, Antioch, Berryessa and Milpitas stations. BART will continue to implement this modification systemwide.

The design effort for the Richmond Station prototype fare gates included a risk analysis specifically looking at safety issues related to the potential for people to be struck by the upper leaves of the stacked fare gate configuration. The result of this analysis was key to the design effort. Fare gates are designed with sensors and a person moving steadily through the fare gate should not be struck by the leaves. We recognize that people occasionally pause or trip the sensors with their bodies, luggage, wheel chair or bicycle. To protect against persons being struck in the head by the upper leaves in these situations, the design tied the lower and upper leaves together. The bottom leaf and the top leaf on each side are tied together by two redundant rods. This means that if either leaf is interrupted, both leaves will stop moving. Extensive lab and file testing have confirmed that the widest part of the person or object moving through the fare gate will stop forward movement of both leaves. Typically, the widest part of a person or object moving through the gate will align with the lower leaves. If an obstruction were to occur, it would disrupt the movement of the lower leaf and this in turn would stop the movement of the upper leaf. The leaves operate under low air pressure and can be easily pushed back if interrupted.

Once the barriers are in the fully closed position, increased pressure is applied to prevent fare evaders from forcing them open.

Since the stacked fare gates have been in service at Richmond Station, we have confirmed there have been no incidents of people being struck by the barrier leaves. We received a number of customer complaints regarding safety concerns. In response to these concerns, BART staffed the gates during all operating hours with employees who helped and guided customers on use of the gates between June 10th and June 17th. The employees explained the gates safety features to concerned customers and observed them in operation. We continue to pay very close attention to the modified fare gates and monitor operations for safety.

Based on a limited count post installation there has been an overall fare evasion reduction of approximately 55 to 60%.

Feedback from frontline employees is that these gates have greatly contributed to a reduction in fare evasion and a greater sense of security.

In July 2019, BART also piloted a higher barrier concept meant to reduce push throughs and jumping at Fruitvale Station. This design was removed in September 2019. 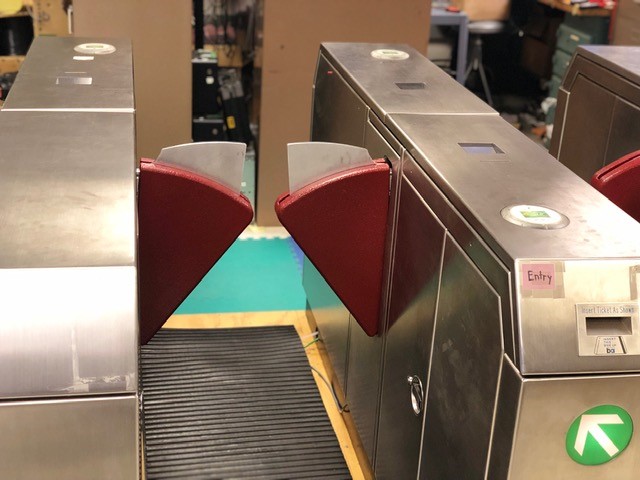 This modified gate featured both the increased pressure when gates are fully closed and a pop-up leaf. The pop-up barrier leaves retracted from the red barrier leaves when opened and popped up to increase barrier height when the leaves closed.

Based on sensor data the pop-ups decreased fare evasion by 31%.

However, following about two months of testing, BART decided to remove the pop-up barriers after staff determined they created an unreasonable maintenance burden.

The pop-up removal was done the week of September 9th, 2019.

The installation resulted in roughly three times as much maintenance as other fare gates with the main driver being the requirement that the timing and syncing of barrier movement  be very precise to allow the pop-up to properly retract when the barriers open.

The pop-up mechanisms were also frequently kicked by individuals jumping the barriers, which led to them being damaged.

Results of the pilots were presented to the September 26th BART Board of Directors meeting. You can see the presentation here.

We are stepping up our efforts through changes such as installing higher barriers and bringing elevators into the paid area, also called station hardening. Station hardening is changing infrastructure other than the fare gates to prevent fare evasion. Investments could include heightened barriers around paid areas, alarmed swing gates and exit doors, elevators moved into paid areas, configured fire alarm systems, digital camera network, video screens and modified fare gates.

BART station hardening efforts in FY20 were incorporated into many projects and programs throughout the District, using operating and capital funds. In FY20, $2.4 million of new and ongoing funds ($400,000 of new FY20 operating funds augments $600,000 of prior year parking revenue held in reserves and $1.3 million of capital staffing) supported station hardening projects, including raising railings and securing swing gates. Additionally, BART directs grant funds to station hardening, including federal formula funds for the fare gate modification program and often redirects existing engineering and maintenance staff to projects such as the fare gate cinch modification program as well as the camera upgrade program. BART’s Station Modernization Program also incorporates elements of station hardening in design, guided by the BART Facilities Standards. Six stations in the Station Modernization Program are spending or will spend a combined $16 million on station hardening elements. In addition, the $61 million Market Street Escalator Canopies project includes installing roll-up grilles at the street level, security cameras and handrail lighting. In summary, station hardening is a substantial, multi-year systemwide effort, leveraging new and existing operating and capital funds from a variety of sources into a wide range of projects. 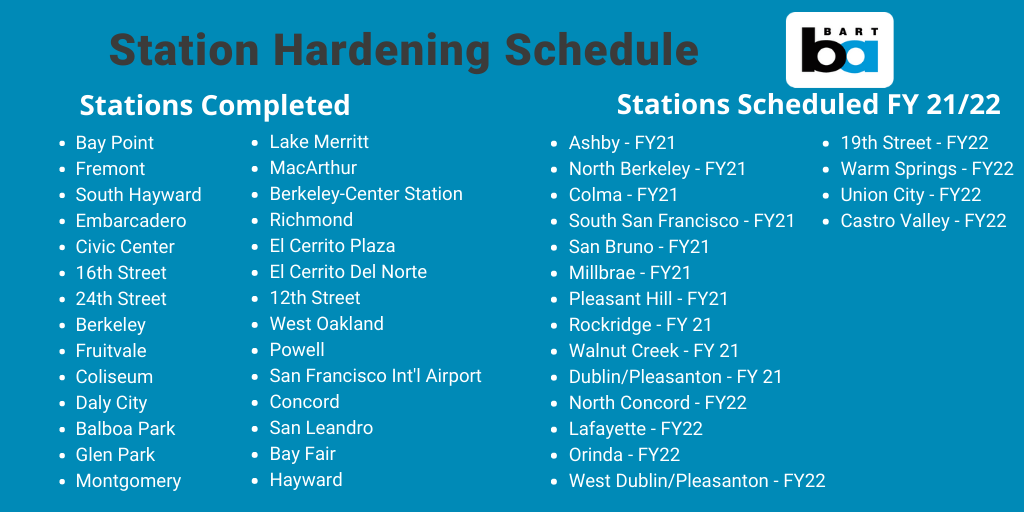 The Fiscal Year 2019 (FY19) budget, which began on July 1, 2018, included $1.2 million for the design and construction of station hardening improvements to make it more difficult for fare evaders to bypass fare gates.

The Fiscal Year 2018 (FY18) budget devoted $2.7 million to a strategy of enforcement, station hardening and education to limit fare evasion and assure our riders that we value their patronage.  That strategy included hiring six Community Service Officers and one Police Administrative Specialist, raising barriers and service gates to a uniform height of 60 inches. It also included eliminating all non-fare gates other than one immediately next to each station agent booth while ensuring fare gates open to provide emergency egress capacity.

In October 2020, BART added a new fare gate at the Coliseum Station elevator to bring the entrance into the paid area. A similar fare gate has also been added to the Concord station.

By July 1, 2020, BART completed station hardening efforts at 28 stations with a schedule to complete another 10 stations by July of 2021.

Proof of payment began on January 1, 2018 with a two-month warning period for first time violators. The grace period ended in early March 2018 when fare inspectors began issuing tickets. Fare inspectors increase police presence on trains and in stations. They deter fare evasion, encourage compliance over time and promote customer equity sending the message that everyone must pay their fair share.

The program started with six Community Resource Officers who received training, particularly on de-escalation and on using fare checking devices. On September 27, 2018, the BART board voted to hire an additional 10 fare inspectors with 8 of them dedicated to nights and weekends. BART Police hired and deployed a total of 15 new Community Service Officers in 2019. Fare inspections progress within paid areas from one person to the next without inspectors skipping anyone, whether in a station or on a train. They have no discretion regarding citations. All interactions are recorded with body worn cameras. Citations are civil with a fine of $55 for juveniles and $75 for adults. Community service is also an option. 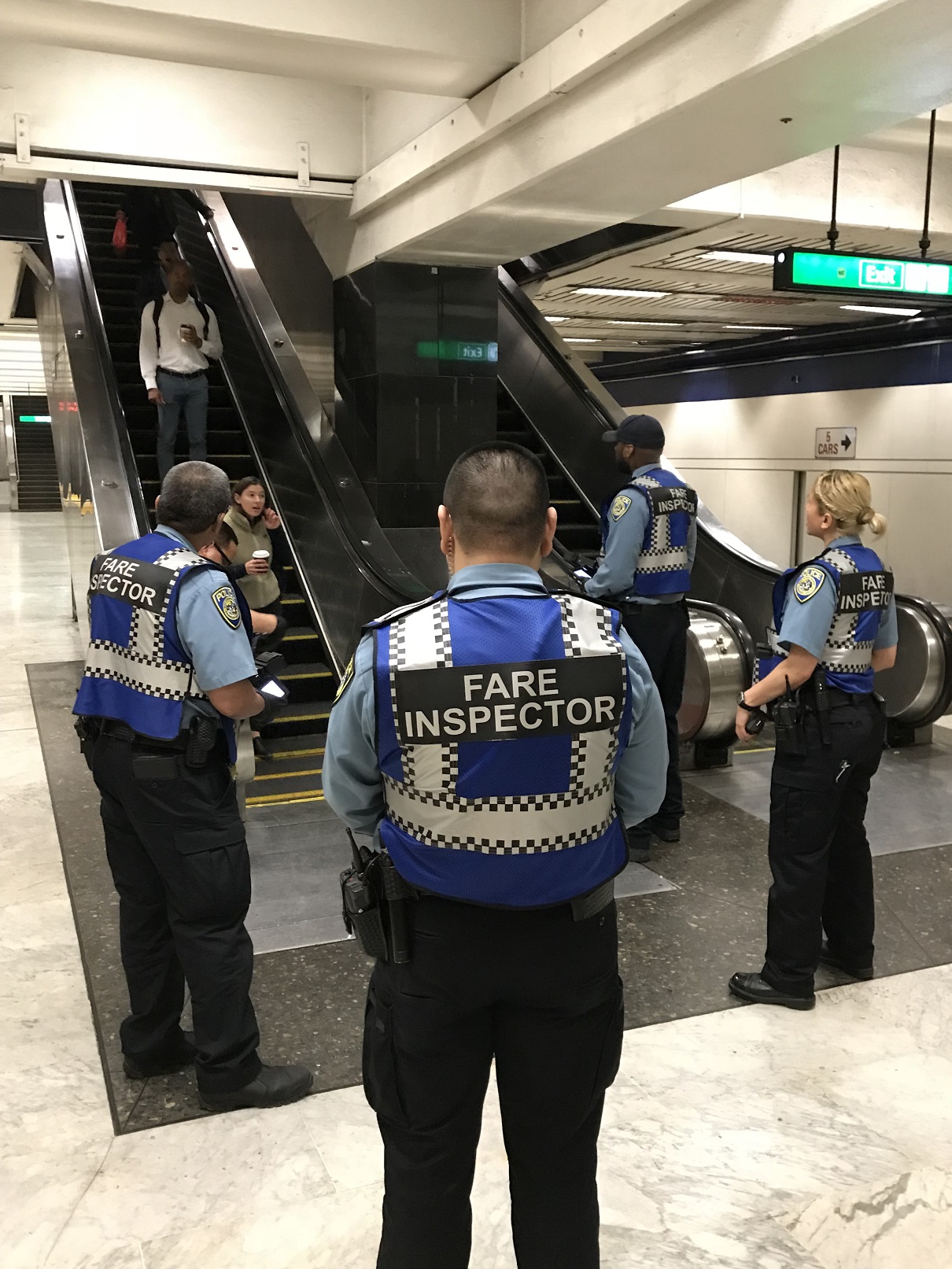