BART currently has the capacity to operate a maximum of 24 trains per hour in each direction through the Transbay Tube between San Francisco and Oakland. Long-term ridership trends at BART require additional capacity, which has long been recognized across the region. As the system expands and as the core continues to attract development, further increases in ridership are expected.

The Transbay Corridor Core Capacity Program is a package of strategic investments that will allow BART to operate up to 30 ten-car trains per hour (300 cars) in each direction through the existing tube, maximizing throughput in the most heavily used part of its system. The program includes four elements: 306 additional railcars to provide the additional trains needed, a new communications-based train control system that will allow closer headways, a new railcar storage yard at the Hayward Maintenance Complex (Phase 2), and additional traction power substations to provide the additional power needed for the more frequent service. 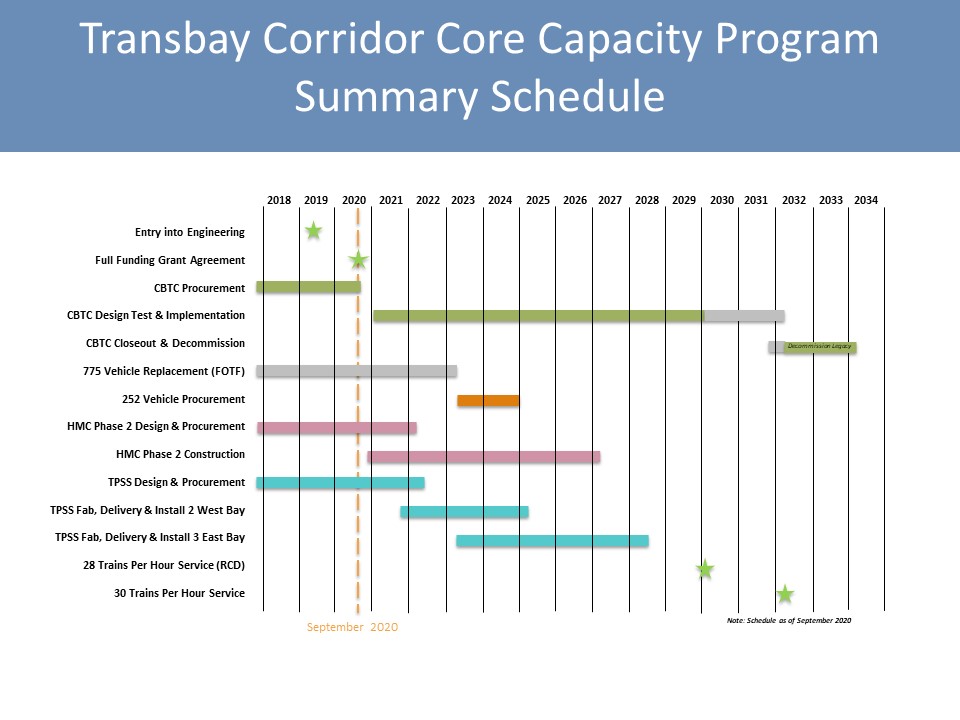 306 Additional Railcars. In order for BART to achieve a regular schedule of 30 ten-car trains through the corridor, BART will require additional cars to make up the added trains and to make longer trains.  BART currently has 775 new rail vehicles on order, which will allow the agency to completely replace it aging fleet of 66 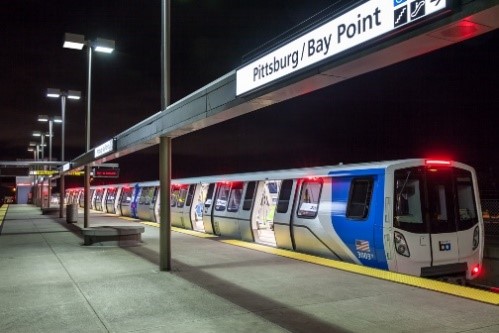 9 vehicles and to expand the fleet by 106 cars.  When this order is completed, BART will be able to provide some additional capacity in the short-term, but will need 306 more vehicles to get to the number of cars required to operate trains more frequently, which is a total requirement of 1,081 cars.

Of the 306 additional cars required, 252 are needed for BART to operate 28 ten-car trains per hour on the four lines (Red, Blue, Green and Yellow) that operate through the Transbay Tube to meet the CIG program goals, and ultimately to run up to 30 trains per hour. The remaining 54 railcars are to increase capacity on the Orange Line (which does not operate through the Transbay Tube), and to increase ready reserve trains, which are needed in case delays occur.

Train Control Modernization Project (Communications-Based Train Control).  To achieve the shorter headways needed to operate 30 regularly-scheduled trains per hour through the Transbay Tube, BART will replace its existing fixed-block train control systems with a new Communications Based Train Control System.  BART has developed an eight-phase implementation program that will begin by testing CBTC equipment on BART’s existing test track in Hayward, and then once the CBTC equipment has been sufficiently proven on test tracks, BART will implement CBTC along the mainline tracks in stages.    The scope of the CBTC project includes installation of lineside equipment within BART’s existing right-of-way throughout the entire system. CBTC allows trains to operate closer together than the current train control system, thus increasing throughput and capacity.  CBTC has been implemented on many of the busiest rail systems in Europe and Asia, and is now the worldwide standard for high-capacity transit train control.

On January 9, 2020, the BART Board of Directors voted to award a $798 million contract to Hitachi Rail STS USA, Inc. to design and build a modern Communications Based Train Control System that will dramatically improve future BART service. Replacing the current train control system, which is 47 years old, will allow BART to run more trains closer together and significantly enhance Transbay capacity.  The contract is expected to be the largest BART award in the 2020s. 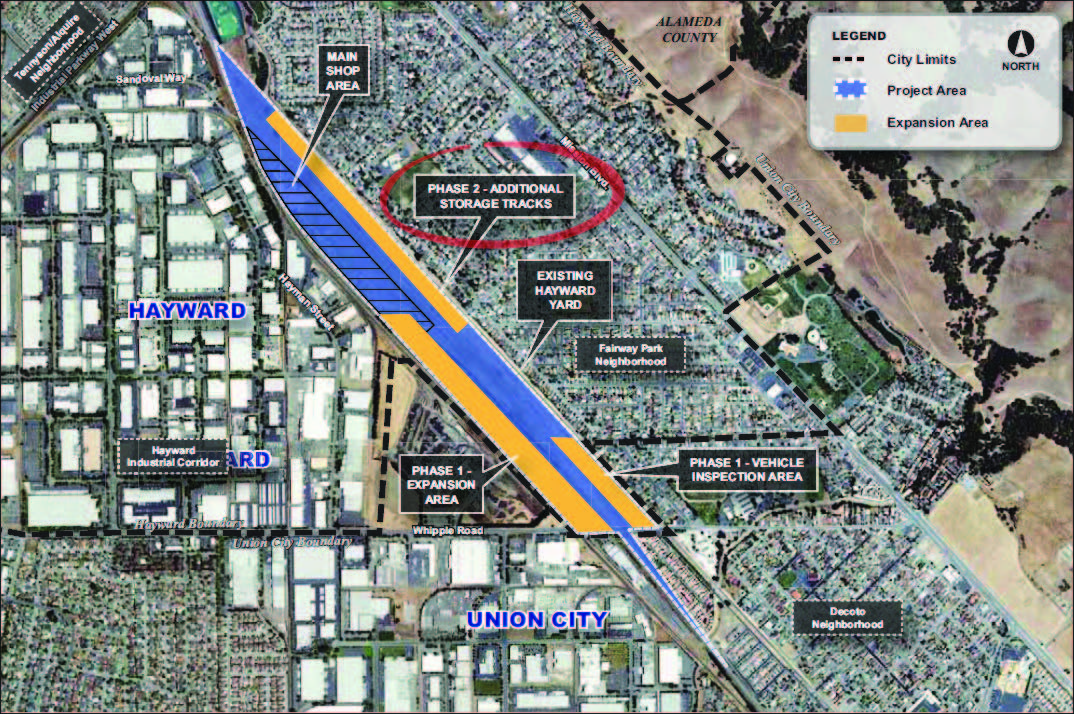 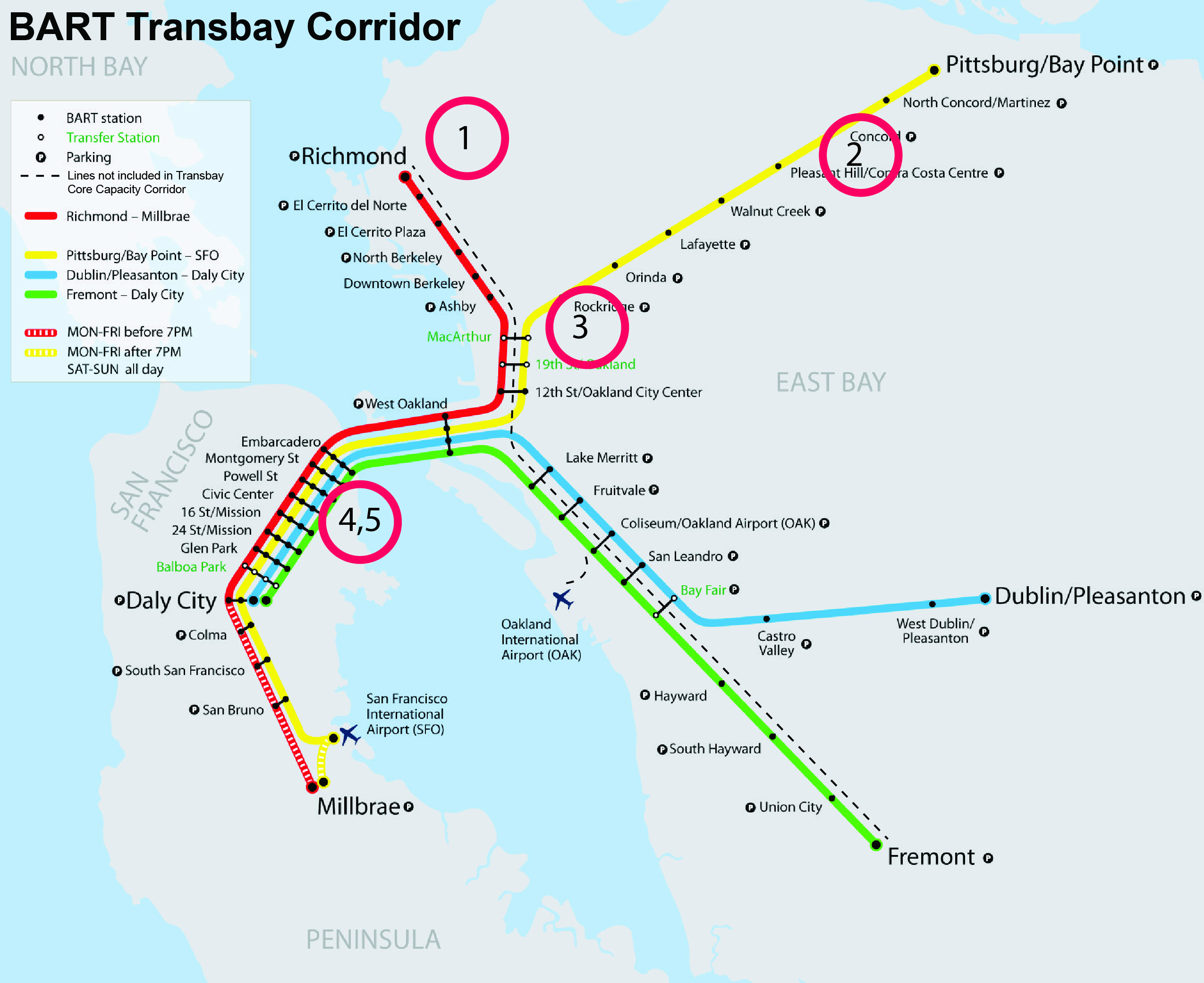 A sixth substation would also be installed at the Hayward Maintenance Complex. The four locations in the East Bay are all within existing BART or Caltrans right-of-way and are at-grade locations.  The two sites in San Francisco are located below grade within existing BART stations BART is also undertaking a major program to replace and upgrade the existing traction power system. While this program will increase the amount of power available for train operation, it is not considered to be part of the Core Capacity Program.

The TCCCP received approval through both the California Environmental Quality Act (CEQA) and the National Environmental Policy Act (NEPA).  The project was approved for a Statutory Exemption (SE) from CEQA on November 17, 2016, and the project received a documented Categorical Exclusion (CE) from NEPA on October 11, 2017.  The links below can be used to access the environmental documents.

As part of a request to the California Transportation Commission (CTC) for funding for the TCCCP, BART prepared a Hybrid Summary Comprehensive Multimodal Corridor Plan (HSCMCP) per CTC guidelines, to document the regional planning processes supporting the project.  The link below can be used to access the plan submitted to CTC.