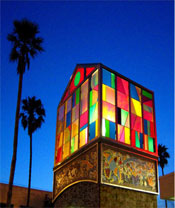 Today officials from BART, the Metropolitan Transportation Commission (MTC) and the San Francisco County Transportation Authority (SFCTA) marked the official opening of the plaza with a ribbon cutting ceremony.

"This is the latest investment in BART's long term commitment to improve San Francisco's Mission District for residents and visitors," said BART Director Tom Radulovich who represents the area. "The plaza renovation showcases what can happen when the neighborhood and government agencies work toward a common goal. In this case it resulted in a redesigned plaza that provides easier and safer access to the station-a plaza lined with new granite pavers, improved lighting and dazzling new artwork created by local artists, which reflect the character of the Mission District."

PROJECT FINISHED EARLY & UNDER BUDGET
Construction on the project was supposed to take one year. However, careful planning resulted in the plaza opening one month earlier than expected and under the $4.2 million budget.

PROJECT HISTORY
While construction only took 11 months, the entire process took nine years to complete. The plaza renovation was a cooperative effort between BART, MTC, SFCTA and the 16th Street Mission community.

A nine-member 16th Street Community Advisory Committee provided insight and ideas on all elements of the project renovation from paving materials to tree selection. The committee's primary goals were safety and having an enjoyable open space.

The renovated southwest plaza to the 16th St./Mission BART Station opened in 2003 and was also part of this community design process.