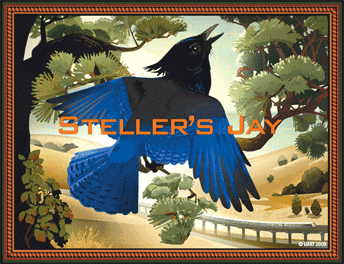 A new series of three art posters featuring California native flora and fauna is bringing a touch of natural beauty to BART stations and trains. The posters were created for BART by award-winning Berkeley illustrator Mick Wiggins, who drew inspiration from natural history museums.

"I spent some time in the stations and on the platforms, thinking about what I'd like to see," Wiggins said. Descending into the muted interior of an underground station reminded him of walking into the low light of a museum gallery and seeing the splash of color from a diorama. The three posters feature a brilliant blue steller's jay, fiery orange poppies against a turquoise sky and a black-tailed deer in shimmering moonlight.

"I put a frame around the images to give it that ‘framed nature’ look like in a museum," Wiggins said. "These are urban natives – all around us, but not particularly special or rare, just the idea that we have some sort of commonality with them. You ride on BART and it goes through all kinds of areas. It’s a natural fit." Other influences on Wiggins included Works Progress Administration poster art from the 1930s, Japanese woodblock art and English railway posters of countryside and beach destinations. 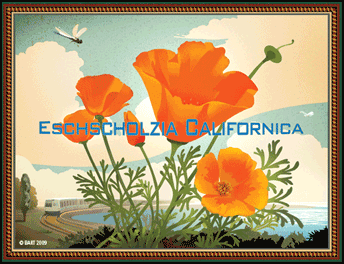 The posters don’t depict specific sites but rather Wiggins’ inspiration from different parts of the BART system. In the background for the steller’s jay he sees the rolling grassy slopes of the Dublin-Pleasanton area; behind the deer are twinkling lights that could be from homes in the Berkeley hills. The poppy scene is more a flight of imagination – set in front of a train closely hugging the shoreline; Wiggins thought it captured the spirit of the Bay Area and our closeness to the water.

Wiggins liked the idea that the trains would be subtle and secondary in the background. "Most of the posters (in stations) are selling something," he said. "I wanted you to get lost in the landscape, lush, a lot of detail that might be engaging in a kind of mysterious way, without any taglines or selling points."

The goals of BART's poster program are to enhance the physical environment of stations and cars, recognize BART’s role in the environment, and celebrate the wealth of artistic talent in the Bay Area. The posters appear in BART stations without messages as a picture would hang in any space. A promotion is planned later in the year to give away smaller versions of the posters through contests on the BART website. 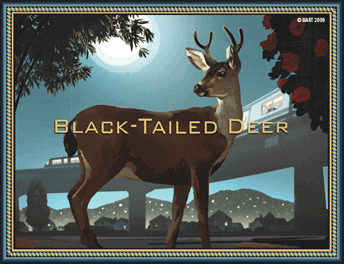 Wiggins' work can be seen in major stock illustration libraries and publications. His beautiful cover images on the reissue of John Steinbeck’s work for Penguin books convey the emotional core of each story and the unique settings in which the stories take place. The delicate woodcut qualities of his illustrations are all the more amazing because he often works in digital format using Adobe Photoshop.