Today, Congressman Garamendi, who is the newest appointee to the U.S. House of Representatives Committee on Transportation and Infrastructure, toured the construction site of the Central Contra Costa County Crossover Project. Construction began in October 2009. Once completed in December 2010, the Crossover project will mean many BART riders on the Pittsburg/Bay Point line will have more seating, more frequent trains and better on-time performance during commute hours. It does this by adding two sections of "crossovers" tracks between the Walnut Creek and Pleasant Hill stations, Additionally, the $13 million in federal stimulus money that completes the $38 million funding package for the project is creating 1,190 direct and indirect jobs. 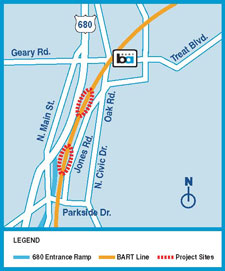 "The $13 million in federal stimulus funding for the Crossover project is doing exactly what we in Congress intended stimulus money to do," Congressman Garamendi said. "In the short-term it creates much needed jobs and in the long-term it leaves the Bay Area with a legacy project that improves the lives of millions of people for decades to come."

PROJECT MEANS MORE SEATING AND MORE TRAINS
The two additional crossovers will provide more seating and more trains for BART customers between Pleasant Hill and the downtowns of Oakland and San Francisco during the commutes. Current operation plans require most Pittsburg/Bay Point Line trains to proceed all the way to the Pittsburg/Bay Point Station, which is at the end of the line. However, as many as six peak period trains terminate their runs at the Concord Station. This is known as "short-turning." Short-turn trains provide increased seating capacity because rather than continuing all the way to Pittsburg/Bay Point Station with decreasing passenger loads, the trains turn around sooner and start picking up customers again in the commute direction. Once completed, the Crossover project will allow trains to turn around even sooner – at either the Walnut Creek or Pleasant Hill stations. This effectively allows BART to add more trains to the schedule – all without having to actually purchase more rail cars.

"Congressman Garamendi has always been a strong advocate for public transit and we're pleased that he toured BART to show his continued support of worthy projects like this one," BART Board President James Fang said. "The federal stimulus funding allows us to complete this critical project and make BART a more attractive option to driving. By being able to lure motorists off the road with the promise of more trains more often with more seating, we will not only be able to reduce congestion, we will also be able to improve the environment as well."

"The speedy completion of this project is especially important to many of my constituents," BART Board Member Gail Murray said. Many of the BART riders Murray represents use the Pleasant Hill, Walnut Creek, Lafayette and Orinda, which would directly benefit from the Crossover Project. "By the time Oakland and San Francisco bound morning commute trains coming from Pittsburg/Bay Point reach many of my riders, seating is at a premium. The crossovers will allow us to turn the fairly empty trains headed in the non-commute direction around sooner and provide more trains and more empty seats for customers headed to work in Oakland and San Francisco."

PROJECT MEANS BETTER ON-TIME PERFORMANCE
The Crossover project will also improve BART's on-time performance by installing two crossover points in the approximately five mile stretch between Lafayette and Pleasant Hill stations. Currently, there are only two crossover points in that stretch – each located just north of both stations. Thus, if there's a stuck train headed northbound between Lafayette and Pleasant Hill stations, all the other northbound trains behind the disabled train would have to cross onto the southbound trackway near the Lafayette Station travel five miles to Pleasant Hill Station and then cross back to the northbound station. Meantime, all the southbound trains would have to wait near Pleasant Hill Station until the northbound trains using their trackway are out of the way. This can cause trains to back up and passengers to experience delays that typically average 10 to 15 minutes. By adding two new additional crossovers in the middle of this five mile section of trackway, BART can cut delays significantly and improve on-time performance for customers.

"With the Pittsburg/Bay Point Line now providing direct service into San Francisco International Airport, it is even more vital that we complete this project for our customers," BART Board Member Joel Keller said. Keller represents the area around Pittsburg/Bay Point. "We know our riders take BART to SFO because our trains are so much more reliable than driving. Thanks to Congressman Garamendi and his strong support of BART, this project will just bolster our average 95% on-time performance."

Learn more about this project by visiting http://www.bart.gov/ccc .