BART riders are using Foursquare and other location-based services to meet and connect with friends and share recommendations for things to do around stations, according to a BART survey released Wednesday, May 5, at the Web 2.0 Expo in San Francisco. 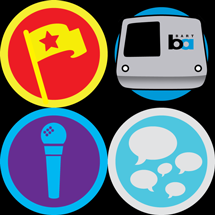 The online survey received 446 responses from riders using Foursquare, which launched in March 2009 and began a promotional partnership with BART in October. Foursquare has popularized "checking in" on mobile devices to share your location and tips with friends; many other web services and applications, from Twitter to Yelp to Gowalla, offer similar location-based functions.

Foursquare incorporates game mechanics allowing users to compete against each other for bragging rights as "mayor" of their most-frequented locations, and to win badges for various accomplishments. Twenty-three percent of respondents to the BART survey said they had earned a BART frequent rider badge; 7 percent said they had become "mayor" of a BART station.

Not everyone liked the competition aspect, however; one respondent wrote: "If I want useless trophy/achievements, I'll stay home and play on my PS3."

"I think it is great to track someone down that I have to pick up at a BART station," wrote one respondent, describing another use for Foursquare – following a passenger's progress from station to station through opt-in check-in notices. "It lets me know where they are in their travels."

Nearly a third of respondents said they typically ride BART five days per week; a third also said they check in regularly on Foursquare at BART stations. Fourteen percent said they're riding BART more often because of their interaction with Foursquare.

As for how BART riders are accessing Foursquare: many use applications native to their devices; for example, about half used an iPhone app; 14 percent used an Android app and 11 percent used a Blackberry app. Another 19 percent used mobile web browsers on other devices and 10 percent used text messaging. Other location-based services being used by respondents included Loopt, Gowalla, Yelp and Brightkite.

Open-end comments on the survey showed a wide range of sentiment. One person wrote that BART has a "unique aspect as a transit system in location-aware social applications; BART is a location that also exists beyond and between locations." Another commented: "Foursquare is a dumb waste of time."

The survey was conducted between January 27 and March 5.

Finally: The favorite color of BART riders using Foursquare was blue, at 34 percent of respondents; followed by green (16 percent), red (11 percent) and yellow (3 percent). An even bigger group – 36 percent – chose "Why are you asking me this?" in response to that question. The answer: Survey developers like to throw in a random question occasionally to mess with your mind to make sure you are paying attention.