The cushion question: What do riders want in "Fleet of the Future"?

The cushion question: What do riders want in "Fleet of the Future"?

In the meantime, BART wages a war on grime with an army of car cleaners and seat replacements 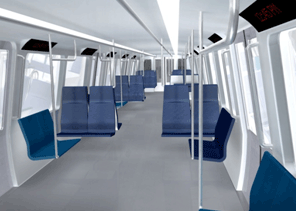 What’s more important to you: a soft, comfy seat for your BART ride, or a seat with an easy-to-clean surface that might be a little more spartan when it comes to comfort? This question is one of the dozens of considerations BART is asking its customers to think about as the transit agency moves toward replacing its current train cars with the Fleet of the Future. (Read more about the new train car project at www.bart.gov/cars)

Not that BART isn’t tackling issues in the here and now as well. Customers have let us know they want cleaner trains, and that includes making sure the current seats on trains that carry 350,000 riders a day are as clean and well-maintained as they can be.

Have you been procrastinating on that spring cleaning? BART can’t afford to – it gives the cars a top-to-bottom cleaning each night in the overnight hours while customers are tucked into bed. “We realize how important this is to our customers and we are pulling out all the stops,” Chief Communications Officer Linton Johnson said.

Just last week, in a presentation about the upcoming 2012 fiscal year budget, BART staff recommended adding ongoing funds to create a regular seat replacement program – so that by the end of next year, nearly the entire fleet will have seats that are no more than three years old.

“This will be a huge improvement,” Johnson said. "In the past, we have not always been able to replace seats as quickly as we would like, so we have had to get by with short-term fixes.”

In the longer term, BART is planning a replacement of the entire fleet of train cars, which may result in seats that are easier to keep cleaned and well-maintained. BART customers have been riding in the same train cars for 40 years (Meantime, their car-driving friends have probably replaced their gas guzzlers several times over since 1972. BART mechanics do a remarkable job keeping BART train cars running, but the job is getting tougher each year – that’s why the transit agency is looking to replace each and every car before ridership builds to 500,000 a day as predicted by the Metropolitan Transportation Commission.  BART is asking customers for feedback on the fleet of the future and scouring the world to find a company best suited to building the fleet.   (See www.bart.gov/cars for more info and to submit your feedback.)

In the immediate term, every seat on BART trains gets a visual inspection from a maintenance foreperson at the end of its run each night. If problems are spotted, such as a significantly soiled or torn seat, workers are assigned to remove it and send it out for dry cleaning or repair – and swap in a fresh one.

End-of-line cleaning shifts at BART are staffed from 9 p.m. to 5 a.m. every day. In addition, if customers spot a problem with a seat at any time, they are encouraged to let their train operator know over the intercom, so that it can be logged for attention. BART is also working on addressing attendance issues that have risen among cleaning staff.

“All the hard surfaces on our train cars are cleaned with industrial disinfectant during end-of-line cleaning,” Johnson said. “However, as with any public place where hundreds of thousands of people pass through each day, you are still going to have germs and bacteria, the same as flying on an airplane or using a public rest room.  Handwashing is a good practice, as the Centers for Disease Control and Prevention recommends.”

"The risk to getting an infection from this organism from riding on a BART train is miniscule," John Swartzberg, M.D., F.A.C.P. said. Dr. Swartzberg is the Director of the UC Berkeley-UC San Francisco Joint Medical Program. "If you are worried, you can kill 99.9% of all bacteria simply by washing your hands with soap and water or using BART's free, waterless hand sanitizer stations located in all of the agency's 44 train stations." 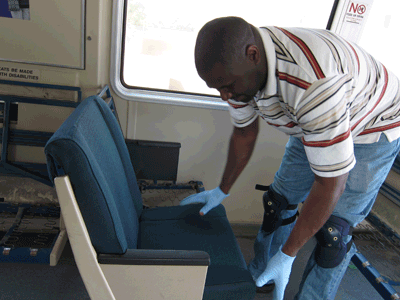 A BART worker changes out a seat

BART’s seat-cleaning issues are more complex than some transit systems’ because of its softer, cushioned seats – a legacy of BART’s status as a hybrid suburban-urban system where some customer have very long rides, and appreciate the additional comfort of a padded seat.Those seats, however, are not as easy to keep clean as some hard-surface varieties of other transit systems. In addition, the cushions must meet strict standards for safety in terms of toxicity in the unlikely event of fire or smoke. They must be made of special materials, which can be more costly and more difficult to acquire when replacements are needed.

BART plans to help solve that problem with more modern, environmentally friendly, easily cleanable seats in the Fleet of the Future – its long-range plan to replace all 669 train cars, many of which have been in service since the system began operations in 1972.

“BART riders can rest assured that when this new fleet is in place, they will have seats that are state-of-the-art for cleanliness and maintenance,” Johnson said. “We are working hard to do the best we can with our current seats, on a daily basis and looking ahead to the seat replacement program requested in the current budget.”

To view BART seat cleaning in action, watch the BARTtv video.  Also, you can watch a BARTtv video about the Fleet of the Future project.