BART riders can help prevent crime by taking to heart some simple advice from BART Police: Avoid being an easy target of criminals on the hunt for electronic devices such as mobile phones, portable music players, laptop computers or e-readers. BART Police are urging greater rider awareness with thefts of electronic devices on the rise, often in the "grab-and-dash" pattern and especially for high-value devices. 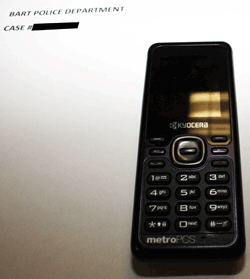 BART evidence photo of stolen phone. High-value
items are most frequently stolen, but any device
can be a target so follow the BART Police tips.

The Top 4 most frequently stolen electronic devices on BART are:

In 2009, there were 88 device thefts reported. That number spiked to 166 in 2010, and the increase appears to be continuing, BART Police Lt. Andy Alkire said.

"While overall these crimes are still relatively rare, that doesn’t matter if you’re the one whose iPad is ripped off," Alkire said. "We don’t want any of our customers to be victims, which is why we want to remind everyone to take simple precautions."

In the typical pattern, users sit or stand right by a door on the train, engrossed in their devices, playing Angry Birds, watching videos or answering emails.

At a stop, just a split second before the door closes, the thief grabs the device and dashes out the door.

What can you do to minimize being a victim, or to help others?

The first and most important thing is not to use a device sitting or standing right by the door. As much as you may think you are paying attention, it’s easy to become distracted and give a thief a chance to snatch a device right out of your hands.

And – even if you are inclined to be a good Samaritan – it’s best not to hand over your phone to a stranger, even if that nice-looking person says they “just need to make a quick call to get a ride.”  (It’s a common ruse to grab your phone and run.)

While it might seem like a good idea to chase after a suspect, BART Police instead recommend that victims and witnesses instead report the crime immediately, either by notifying the first BART employee they see (train operator via intercom, station agent in station), or by calling BART Police. (It’s recommended that you program the BART Police number into your mobile phone. That number is 1-877-679-7000. For emergencies, call 911.)

If you observe a theft, please consider taking the time to stay behind and help with the investigation as the victim files a report. BART Police can use your help in providing a description of the circumstances and the suspect. Try to recall in as much detail as possible what the person was wearing, their appearance or any distinguishing characteristics.

If you have the serial number of a stolen device, that information can be entered into a statewide Automated Property System to help with the investigation. In addition, some makers of electronic devices, including Apple, provide services that assist in making stolen devices unusable or less usable and thus less valuable on the underground market. Contact your device maker to find out more.

TIPS TO AVOID BECOMING A VICTIM

Here are more tips on how to avoid becoming a victim. These are included on a bookmark-type handout that BART Police are giving out to riders on trains, in an effort to increase awareness.

For more information, visit the BART Police section of this website.