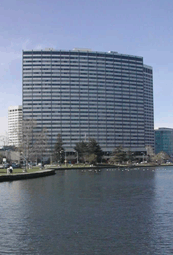 Bay Area taxpayers can now be more confident BART is spending their money wisely: the Agency has been honored by the San Francisco Business Times for a real estate deal that will save almost $8 million on the rental costs on its administrative offices over the next seven years.  The publication recognized the deal as “The Best Office Lease/Inner East Bay” in its March 25, 2011, special edition.

BART’s Real Estate Department saw the economic downturn as an opportunity to renegotiate the lease with the Swig Company at Kaiser Center in Oakland. The original lease for 300,000 square feet of office space on 14 floors for 700 employees was signed in 2002.  It was due to expire in 2014. “We thought it would be a good time for us to review our lease and explore other locations,” Real Estate Department Manager Laura Giraud said. “We looked at other properties throughout the Bay Area, but once we factored in the cost of moving, etc., we negotiated new terms that took advantage of the economic climate to save money in the future.”

The new lease is good through 2021, includes one year free rent and $4 million dollars credit for previous and future tenant improvements.

“I congratulate BART's Real Estate Department for their proactive approach, which is saving the taxpayers and our riders their hard-earned dollars,” BART Board President Bob Franklin said.

The real estate deal isn’t the only way BART has found savings without cutting service or laying off workers: it ended Fiscal Year 10 with a $4.5 million operating budget surplus. On capital projects, BART’s Earthquake Safety Program is performing so well that additional work will be able to be completed within the program’s existing budget and the Warm Springs Extension project is $112 million under budget on the first of its two major contracts. For more information on BART’s finances, see www.bart.gov/financials.