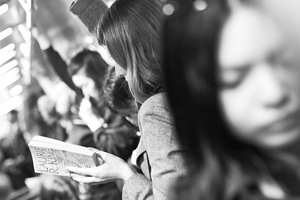 It’s not your imagination. BART trains are getting more crowded, especially in the peak commute hours.

The good news: It’s an indication the economy is rebounding, more people have jobs to go to, and they’re choosing public transit as an alternative to high gas prices.  The bad news: Crowded cars are less comfortable for riders.

What can be done to help? BART is stretching train car utilization to the max, putting every possible car in service that can be used without jeopardizing safety or reliability. We’re also working over the long range to completely replace the fleet and expand capacity (see www.bart.gov/cars for more info).

“Our cars continue to age and require intensive maintenance to maintain reliability,” Jay Bolcik, manager of schedules and service planning, said. BART has one of the oldest fleets in the nation. Meanwhile, “We are on track for our third-highest ridership year ever,” Bolcik said.

Riders can do their part to maximize space by following the guidelines for courtesy and safety, such as moving to the center of the car to make room for riders getting on, not holding the train doors open, following rules for bicycles and preparing to exit as the train nears your destination. With more crowded trains and warmer summer weather coming, a little patience goes a long way.

Recently in 2011 BART has seen weekdays with ridership of 360,000-plus – edging up against figures from 2008, the system’s highest sustained ridership levels for regular days, without special events. Wednesday, April 20, 2011, had ridership just shy of 375,000. (The highest-ridership day of all time was the day of the San Francisco Giants World Series victory parade in 2010 with 522,200, and several of the next-highest, at 400,000-plus, were during Bay Bridge closures.)  The most recent quarter's ridership statistics are on the agenda to be presented at the next Board of Directors meeting on Thursday, May 12, as part of the Quarterly Performance Report.

While overall numbers are one thing, looking at commute hours is even more telling – after all, about 57 percent of all BART ridership happens in the peak (defined as 7 am – 10 am and 4 pm to 7 pm). Every month so far in calendar year 2011 the combined AM/PM peak ridership has been in the 190,000s – after reaching that level only four months in all of 2010.

Even more interesting is the “peak of the peak” – numbers obtained from internal modeling, showing riders traveling to the most congested stops in the San Francisco Financial District. Those numbers are trending even higher than the record seen in 2008 – about 46,500 every morning, compared with about 46,000 in 2008.

Bolcik noted that, with the recent opening of the West Dublin/Pleasanton Station, BART is now serving 44 stations without any increase in the total fleet size although some trains were lengthened on the Dublin line to serve the new customers. BART typically has 573 of its 669 train cars available at the peak commute, representing 85 percent of the BART fleet – one of the highest utilization rates of any major transit agency.  (The rest of the cars are undergoing scheduled maintenance or component upgrades.) “We don’t let a car operate unless we have complete confidence in its safety and reliability,” he said.

As another way to help riders be more comfortable with the existing cars, BART has modified the seat configuration on some to increase the space for standing riders. It means less sitting space available, but more capacity overall. (Read more about the train car modification effort at: http://www.bart.gov/news/articles/2009/news20090720.aspx)

GIVE YOUR INPUT ON THE FLEET OF THE FUTURE

That balancing act will continue as BART researches car designs for the new fleet. You can give input by attending one of the upcoming seat lab demonstrations or sending in comments; find more info at www.bart.gov/cars.

Board of Directors meeting agendas: http://www.bart.gov/about/bod/meetings.aspx