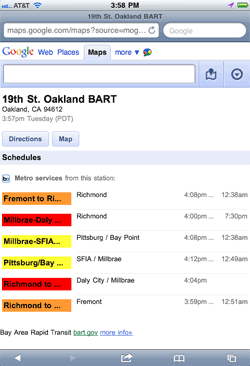 BART has partnered with Google and top transit agencies from around the world to bring real time transit information to a new beta service called Google Live Transit Updates.

"Now when you Google your directions with the 'by public transit' option on Google Maps, you are able to see the real time departure information for BART trains, in addition to the suggested routes, which makes taking public transportation even easier and more efficient." BART Board President Bob Franklin said.

BART was part of an international partnership of transit agencies from Boston, Madrid, Portland, San Diego and Torino that created a standard, lightweight way to describe real time arrivals and service advisories for use in this project. The resulting real time specification is built to work with the General Transit Feed Specification, which was originally developed for Google Transit in 2006.

“We’ve created a new data specification for sharing real time information. For now it's powering Live Transit Updates, but in the future it can be used by even more innovative services," BART Website Manager Timothy Moore said.

In 2007, BART became one of the first transit agencies in the country to provide standardized data for use in third-party apps and website. BART pioneered an open data strategy that powers more than three dozen apps and has served as a model for other transit agencies across the country.

Remember: this is a beta release, so for best BART information anywhere use the BART website (bart.gov) or BART's mobile site (m.bart.gov). We also have on-demand SMS (bart.gov/sms) and subscription-based email/SMS services (bart.gov/alerts).