Help plan the future of bikes on BART; take an online survey

Help plan the future of bikes on BART; take an online survey

In 2002 BART created its first Bicycle Access and Parking Plan (.pdf).  A lot has changed since then: While BART ridership has grown about 15%, the number of riders bicycling from home to BART rose almost 65 percent, from 2.5% of all passengers to 4.1%.

Now, thanks to a Caltrans grant, BART is updating the Bicycle Access and Parking Plan -- and you can take a survey to help. 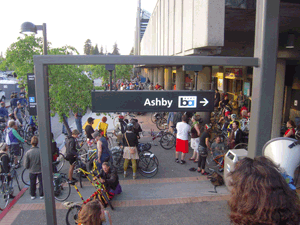 "We offer more options for parking bicycles including Bike Stations at the Embarcadero, Fruitvale, Downtown Berkeley and Ashby stations, and we’re in the process of adding up to 1,000 new electronic bike lockers at 25 stations," said Steve Beroldo of BART’s Access Department, who is the staff liaison to the BART Bicycle Task Force.

Some things haven’t changed.  “It’s still a priority to accommodate bicycles on trains whenever possible and to provide safe, secure bike parking when you can’t take your bike on BART,” Beroldo said. “It’s still important for us to hear from BART riders about what we should be doing to make it easier to bike to BART and easier to share the space on trains with all passengers. We want to hear from both riders who use their bikes as part of their BART trip and those who don’t bike but share the train with bicyclists. ”

To this end, BART has released a new survey aimed at passengers who currently do and do not bike to BART. It’s multiple choice, and takes about 10 minutes or less to complete. If you take the survey, you’ll be asked about characteristics of your typical BART trips and the importance of various factors that affect your decision to bike, or not to bike, to BART.

Victoria Eisen, principal at Eisen|Letunic, the consulting firm assisting BART with the survey, shed some light on its purpose.

"We need to understand how and why people access BART today to be able to understand what encourages BART passengers who can bicycle to BART to do so, rather than drive to their station," Eisen said. The survey data will be compiled with other information into a spreadsheet tool BART can use to identify the best investments to encourage bicycling to particular station types.  "We want to get as wide an audience as possible," said Eisen.

Claudia Castro, a BART rider and cyclist interviewed at the Berkeley BART Bike Station, said she’s "really glad to this survey done, it means that BART is asking."  Like many, she hopes that the country will move away from its dependence on oil, and sees public transportation and bicycles as integral components of this shift. It is still too soon to tell exactly what kind of effect the survey will have, but Eric Carter, another BART rider and cyclist, thinks the survey is a step in the right direction. “It’ll change something; it’ll make life easier," he said after departing a train at the Berkeley BART Station.

Eisen said the survey is just one way BART is collecting feedback; other sources include past BART station access surveys, customer satisfaction surveys, a recent series of BART passenger focus groups of self-identified bicyclists who do not currently bike to BART, and meetings with countywide bicycle advocacy groups and bicycle planning staff throughout the four BART counties.