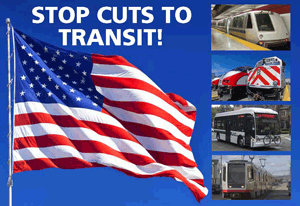 “We have a choice -- a House version of the Surface Transportation Authorization that would cut our funding by 30%, or a Senate version -- led by California Senator, Barbara Boxer, that would maintain current funding. We urge our riders to support Senator Boxer’s efforts,” BART Board President, Bob Franklin said.

Congress approved a six-month funding extension for the surface transportation authorization bill last week, but the threat of a 30% cut in funding is still very real despite the fact that ridership is growing. For example, BART saw record ridership of 887,000 last week. If these cuts occur, Bay Area transit riders can expect service cuts and delays, fare increases, vehicle breakdowns and over-crowding.

"While members of Congress propose to cut more than one-third of federal funding to public transit and all surface transportation programs, we join other Bay Area transit agencies to stand for long-term legislation to make transit investments more predictable. This would do more than just improve day-to-day operations, it would create stable jobs during a weak economy, improve our customers' quality of life, and keep our City and system safe for years to come,” Edward Reiskin, Director of Transportation for the San Francisco Municipal Transportation Agency, said.

“Over the past year, we have been forced to make some major cuts in service due to a lack of funding,” AC Transit Interim General Manager Mary King said, “it would be devastating for public transit -- and the millions of people who rely on it -- if Washington were to pare back further resources.”

BART and APTA are making it easy for the public to get involved. The website www.supporttransit.org has connections to Facebook, Twitter and other social media. There is even a low-tech postcard campaign. The postcards will be mailed to Senator Barbara Boxer’s office because she is Chair of the Senate Environment and Public Works Committee. Senator Boxer has been a strong supporter of public transit and now she needs our support as she fights to maintain funding.

BART has collected more than 1,500 postcards and will be handing out several thousand more at the rally and at El Cerrito del Norte, Pleasant Hill, Walnut Creek, MacArthur, Fruitvale, Fremont, Embarcadero, 24th/Mission and Daly City stations. The goal is to have an additional 1,000 postcards to send.