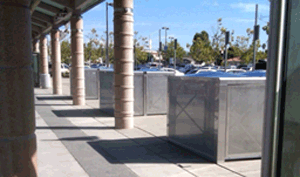 Over the last few months BART has installed 336 new electronic bike lockers at 19 stations. This is the second deployment of lockers around the BART system.

Unlike older generations of keyed lockers, which had one user per locker, the electronic lockers allow multiple users. "Given real estate constraints at BART stations, there just isn't room for everyone who wants a locker to have their own key-operated locker," said Steve Beroldo of BART's Access Department, who also serves as the staff liaison to the BART Bicycle Task Force, which has a meeting coming up on Feb. 6, 2012. Find out more and download the agenda (.pdf). Beroldo added that, "Frankly, most of the keyed lockers sit empty on any given day because not all key-holding cyclists use them daily."

To use the electronic lockers a cyclist needs a BikeLink Card.  They can be purchased online for $20 at www.bikelink.org, retail locations are also listed there.  The card works like a debit card.  The cyclist inserts the card at an available locker, estimates how long their bike will be stored there, backs their bike in and closes the door.  When the cyclist returns, they again insert their card, a rental fee is deducted from the card (currenlty lockers are rented at the rate of 3 cents per hour), the door opens and the cyclist retrieves their bike . . . and they’re on their way.

MORE LOCKERS ON THE WAY

Funding for the lockers has been provided by several grant sources:

OTHER BIKE PARKING OPTIONS AT BART

Of course, cyclists can bring their bicycles on most trains and folding bikes are allowed on all trains.  The QuickPlanner at bart.gov and the printed schedules identify which trains allow bikes.  Generally non-folding bikes are not permitted during the busy rush hours
.