Best scoring bid to build BART's Fleet of the Future

Best scoring bid to build BART's Fleet of the Future

BART staff is recommending that the Fleet of the Future next generation of rail cars be built by North American-based Bombardier because the company’s bid represents the best combination of low price, high technology and proven reliability.

Bombardier’s bid came in about 12 percent less than a French manufacturer, Alstom, while also earning the highest technical score. Bombardier has committed to go above the federal requirement that 60 percent of the parts for the cars be built in America and to assemble the cars in the U.S.

“BART understands the importance of the ‘Build in America’ movement and the urgency of putting Americans back to work,” BART General Manager Grace Crunican said. “It’s why our Board adopted the nation’s first Buy America Bid Preference Policy. Bombardier took that policy to heart and responded while never losing sight of the importance of price, quality and reliability.”

THE EVALUATION PROCESS
BART’s 31-month-long procurement process evaluated bidders on eight criteria, with price receiving the greatest weight. BART’s Buy America Bid Preference policy weighted the bidders’ prices based on the degree to which they exceeded the federal mandate for American-made components. Compared to the French company, Bombardier’s price was about $184 million less, the equivalent of 104 rail cars. 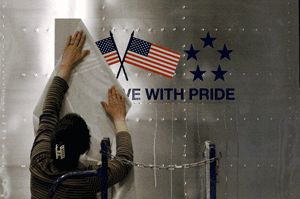 A Bombardier employee puts the finishing touches on a
new Metro-North car in Plattsburgh, NY. New BART cars
could be in service in 2017. (Source: BART)

GETTING TECHNICAL
Bombardier also earned the highest technical score of the three bidders. The technology score is the result of painstaking evaluations by two independent teams of 29 BART and industry experts that drilled down into the details of the proposals, appraising criteria such as brake configuration, brake calipers and hydraulic fluid type. The evaluation process included checks and balances to reduce the possibility that any one criteria or evaluator could have any controlling effect on the overall scoring process. The technical score and the price score were added together to arrive at the combined score, with Bombardier earning the highest combination. 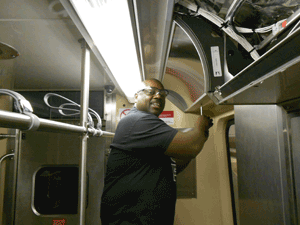 NEXT STEPS
The next step occurs on Thursday, April 26th, when BART staff will officially recommend to the Board of Directors that Bombardier be awarded the new rail car contract. Because the Bombardier bid represents such a good value, staff will recommend that the company be approved to build not just the base order of 260 rail cars but to also build an additional 150 for a total of 410 new cars at an average cost of about $2.2 million per car.

The BART Board is expected to vote on the contract recommendation at its May 10, 2012 meeting. The first new cars could be in service in 2017 and all 410 cars of the initial order could be carrying passengers within eight years. BART must replace its oldest- in- the-nation fleet of cars with at least 775 new cars in order to maintain safe, reliable service for an ever increasing ridership that will include an extension to San Jose by 2018. Learn more and read the complete staff recommendation in the Board meeting section.