An invitation: Share your memorabilia as BART marks 40th year of service to the Bay Area

An invitation: Share your memorabilia as BART marks 40th year of service to the Bay Area 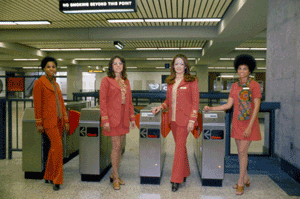 BART employees in the styles of the 1970s

Turning 40 prompts punchlines, but it’s a milestone for most humans – a time not only for reflection but also for looking ahead. So it goes with a transit agency, its employees and, most importantly, its riders.

BART marks four decades of service this September, and the year ahead will bring nostalgia along with renewed conversations about the future. As we observe our 40th anniversary of operations, we are interested in your memories of BART.

You know how, at a 40th birthday party, the room might be decorated with snapshots and keepsakes like a version of “This Is Your Life”?  First birthday photos of a child with her face covered in frosting, playing with the box instead of the present. A pay stub from a first job; maybe a wedding album.  The mundane and sublime things that help put together a story, a history.

We’ll be gathering memorabilia throughout BART’s 40th anniversary year, and hope you’ll share some of your own. We'll display some of the visuals on a Pinterest pinboard and will use materials in other ways to tell our story. If you have photos that you’d like to share on a service like Flickr just use the Creative Commons license so we can give you proper attribution and tag them with BART40th. You can also email suggestions to bart40th@bart.gov.

Expect to hear much more about BART’s 40th anniversary year in coming weeks, including special promotions and events, beginning with a kickoff announcement on Sept. 19.