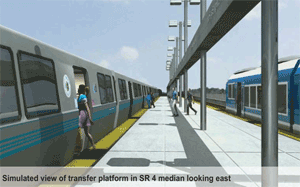 The ceremonial event marked the ground-breaking for the eBART Antioch Station Facilities, which includes station parking and project maintenance facilities. Diesel multiple-unit (DMU) trains are high-speed, high-capacity trains that will transport passengers from the Antioch Station at Hillcrest Avenue and State Route 4 to the Pittsburg/Bay Point BART Station, where passengers can transfer to a BART train.

“I am so pleased to see the many years of cooperative work on this highway and transit project coming together for this event,” said BART Director Joel Keller.  “A groundbreaking in Antioch fulfils some of my dreams as mayor, and will bring satisfaction to East County residents who have been paying BART taxes for so many years. Also, BART's 25 percent local hire goal for this contract will create opportunities for the East County folks to work locally."

eBART is in construction now at the Pittsburg/Bay Point BART Station, where work on the transfer platform is underway.  At the same time, state crews are widening SR-4. In total, five construction projects will widen SR-4, its interchanges, and local roadways from west of Loveridge Road to the State Route 160 interchange. The SR-4 project will also provide the widened median and the structures for the eBART project.  The total cost to widen SR-4 is estimated at $554 million, including $72.2 million from voter approved Proposition 1B.

“Every investment in infrastructure is an investment in California’s future,” said Caltrans Director Malcolm Dougherty.  “Thanks to the people of California for their desire towards reducing congestion and improving safety, Proposition 1B is providing a real boost to transportation.”

"This project serves as a strong validation for Contra Costa County voters, who passed Measure J to pay for transportation improvements along the SR- 4 corridor, as well as other key transportation projects in the county,” stated Don Tatzin, CCTA Chair. “This local revenue source has made all the difference in our ability to move this project along on schedule and put Contra Costa residents back to work.”

The SR-4 widening and BART project represent a combined investment of more than $1 billion to address one of the most congested corridors in the Bay Area.  eBART, which will start service after completion of the highway widening, is funded from Contra Costa’s 2004 transportation sales tax Measure J, Proposition 1B, and other local and regional sources.

“Not only will the eBART project create hundreds of construction jobs, we expect this extension will add around 50 permanent positions as well,” BART General Manager Grace Crunican said.  “eBART will be a triple win for East Contra Costa County residents.  This project will boost the economy, relieve congestion and help make the air cleaner by taking thousands of cars off the road each day."

For a fact sheet and more information about the project, visit the East Contra Costa Extension project page.