Customers’ overall satisfaction with BART is up with gains in ratings for on-time performance and cleanliness of seats, reflecting investments in the system such as the installation of new, easier-to-clean vinyl seats. 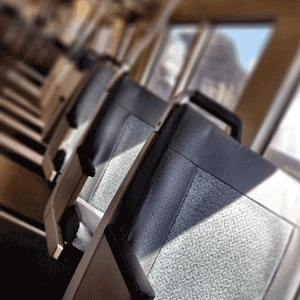 Photo by David M. Anderson via Flickr. New vinyl
seats like these have been popular with riders.

The rankings came in the latest official BART Customer Satisfaction Survey, which is done every two years. Preliminary results were presented to the Board of Directors workshop this past weekend and full survey results will be released in a report later in February.

“We’d like to thank our riders for recognizing the investments we’ve made in the BART system, and let them know we are also working diligently on the areas where they find room for improvement,” Board President Tom Radulovich said. “We truly value this customer feedback and use it to set priorities for improving our service to customers.”

Overall satisfaction is up by two points in the 2012 survey compared with 2010, to 84% from 82% -- meaning 84% of respondents said they were very satisfied or somewhat satisfied with the services provided by BART.  Only 5% indicated they were somewhat or very dissatisfied with BART.

Survey respondents are also asked to rank 48 specific attributes on a scale with 1 being poor and 7 being excellent.

The attributes showing the greatest satisfaction improvements in 2012 were noise levels on trains, on-time performance, leadership in solving regional transportation problems, condition/cleanliness of seats and comfort of seats. The improved rankings on noise may be related to additional rail grinding of tracks, while the seat progress most likely reflects an ongoing upgrade from cloth to vinyl seats.

The attributes showing the greatest declines in 2012 were escalator and elevator reliability, elevator and station cleanliness and availability of seats on trains (down a range of between 2.1% and 4.6%) – the latter reflecting increased ridership over the past two years to the highest sustained levels the BART system has ever seen. The decline in numbers for escalator reliability is likely attributed to the problems BART experienced over the summer when a record 37 out of 179 units were out of service.  BART responded with increased staffing and a concentrated repair effort to get the units back up and running.

The independent survey was conducted in September 2012. More than 6,000 randomly selected riders participated.