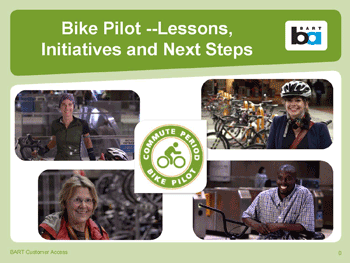 Today, the BART Board of Directors announced a second phase of “bikes on board” testing during the week of Monday, March 18 through Friday, March 22, 2013. During this phase, bicycles will be allowed in all stations and on all trains all day during the test week. This is a change from the current policy which limits bicycle access to BART during commute hours. Download the presentation (.pdf) made to the Board for more details.

BART launched the first test phase of a modified bike access program in August 2012, when bikes were allowed on trains and in stations at all hours every Friday that month. “Our first pilot offered us great insight, but Fridays in August tend to be slow, and another round of testing and customer feedback is required before permanent changes to our bike access policy are considered,” said BART Board President Tom Radulovich.

Responding to input from some customers following our first pilot, BART is changing one rule during the new test: no bikes will be allowed in the first three cars of each train during commute hours (7 am to 9 am and 4:30 pm to 6:30 pm).  This gives more options for those who want to avoid bikes all together.  For safety reasons, at no time are bikes allowed in the first car.

“BART staff has been busy reconfiguring the interiors of our cars to allow for more space for standees, bikes, strollers, luggage and wheelchairs.  These changes help make boarding and off-boarding easier for all our riders and provide more space for bike riders to stack their bikes and free up room for others.  We are on track to have reconfigured 100% of our fleet by the end of June,” Radulovich said.

All operational safety related bicycle rules will be enforced during the test week including no bikes on crowded cars, yield to disabled and senior passengers, don’t block aisles and no bikes on escalators. See www.bart.gov/bikes for the full bike rules. Once again, customers will have an opportunity to take a survey starting March 18th and provide feedback about the test by going online to www.bart.gov/bikes or calling 1-888-743-9921.

"Expanding access and parking for bicyclists encourages riders to ditch their cars, freeing up car parking spaces for those who have no other option than driving," BART Board Member Robert Raburn said.  "BART is installing more bike lockers and racks monitored by security cameras, but when bike parking is filled the remaining option is to bring the bicycle on board."

BART staff has been working closely with the bike coalitions and the Accessibility Task Force, which advocates on behalf of people with disabilities and seniors, to ensure successful implementation.

"We heard from countless bike riders on both sides of the Bay that the August pilot opened up regional commuting by bike for both experienced bike riders and those wanting to give it a try for the first time,” said Leah Shahum, Executive Director of the 12,000-member San Francisco Bicycle Coalition. “We applaud BART for instituting this week-long March pilot removal of the bicycle blackout period and look forward to helping make it a success for both those who ride bikes and those who don’t.”

"We are happy to work alongside BART to make this second all-hours bicycle access pilot a success for all BART riders,” said Renee Rivera, Executive Director of the 4,000-member East Bay Bicycle Coalition. “By creating more access for bikes on BART we are giving Bay Area residents a new healthy and convenient commute option.”