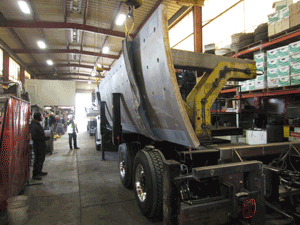 Inside the fabrication building, a custom-built plate-handling
vehicle carries a steel plate to be used for reinforcement.

In a carefully choreographed late-night dance over the next 14 months, a custom-built truck with cranes attached will roll onto BART tracks inside the Transbay Tube and hoist into place steel plates weighing four tons each, as heavy as a rhinoceros.

“We’re installing these steel plates inside the tube to make it stronger against an earthquake,” said Tom Horton, group manager of BART’s Earthquake Safety Program.

The work, which will begin on March 26, 2013, is the latest in a series of earthquake safety improvements in the tube that have been going on since 2005. The rest have been mostly invisible to riders, but this one will require some delays in late-night service (generally after 10 pm on Tuesdays, Wednesdays and Thursdays, estimated at 15-20 minutes) for the single-tracking that allows the work to take place safely.

It’s kind of like setting up a construction site that goes up each day of work and has to be completely dismantled at the end of the day, in the binocular-shaped 3.6-mile underwater tube that is one of the world’s landmark civil engineering achievements.

“It’s a tight squeeze in there,” Horton said. Crews of 15-20 people will be involved each work night, using high-railer trucks on the side where no trains are running to bring in the steel plates and drill the bolts that fasten them to the interior of the tube.  The plates are welded together end-to-end.

A SHORT WINDOW FOR EACH NIGHT'S WORK

It’s a race against time to get the night’s work done and all the equipment out before service starts, when both bores of the tube will be needed for the morning commute.

“It’s pretty quiet in there at night,” said Tony Hitchings, principal engineer. “But then there is a cacophony of sound as these high-railer vehicles keep their engines running, so they can be sure to get out at the end of the night so service can start up again on time.” 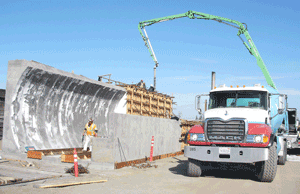 At a remote practice facility, a partial mock-up of the Transbay
Tube was created to test specialized plate-handling equipment
that will be used during the earthquake strengthening work.

It was such a complex feat to prepare for that a mock-up of the tube was built in an exurban practice facility to test that the large, specialized equipment could get into the tight spaces where it needs to maneuver while carrying its leviathan load.

“This is where your prep work really matters,” Hitchings said.

SHORING UP FOR SAFETY

The steel plates will shore up sections of the tube where BART has identified that reinforcements are needed, due to underground conditions and the predicted sideways movement that would be expected in a large quake.

“As part of the other work that has been done over the years for earthquake safety, we have been able to analyze the tube closely and know where these reinforcements are needed,” said Molly McArthur, manager of community relations for capital projects. BART does not detail the specific sections where work is occurring for security reasons.

McArthur noted that the Transbay Tube was designed from the beginning with seismic  safety as a priority because, while the tube does not run directly over any fault lines, all of the Bay Area is earthquake country, where preparedness is a part of life. In the 1989 Loma Prieta earthquake, the tube sustained no damage and in fact reopened hours after the quake, providing a vital lifeline across the bay.

In a 2009 interview on the anniversary of Loma Prieta, retired BART train operator Donna "Lulu" Wlikinson, who was operating a train inside the tube at the time of the quake, recalled getting a radio notice to “hold position” but said at first she had no idea why.

“It still hadn’t dawned on me, because I never felt anything,” she said, remembering that she had reassured riders, “We’re fine, there’s no problems here!”

THE MOST ADVANCED TECHNOLOGY

As technology has continued to advance, BART has taken every opportunity to strengthen and improve the tube, along with the rest of the BART system, Horton said. “When BART was built, the database of information that we have now didn’t exist,” he said. “We didn’t have such an extensive knowledge of the behavior of structures, from experience all over the world. We all have the benefit now of the most advanced technology.”

Overall, BART’s Earthquake Safety Program will strengthen not only the tube but also 34 stations, 22 miles of elevated track (including 1,918 support columns) and parking structures and other facilities. The program is on budget. Strengthening the Transbay Tube is a major priority of the program. The tube connecting San Francisco to Oakland carries about half of BART’s daily weekday riders and, during the peak commute hours, gets about the same number of people across the bay as the Bay Bridge.

AN INCONVENIENCE, BUT FOR SAFETY IN THE LONG RUN

“The tube is critically important, not only to BART but to the entire region,” McArthur said. “We realize that this work will be occurring over a long period and it will cause an inconvenience for late-night riders who experience delays. We appreciate their patience and hope they understand that the project will result in greater safety for all in the long run.”

Details of the work are subject to change. Riders can keep track of the work by reading Passenger Bulletins or signing up for BART Service Advisories at www.bart.gov/advisories.