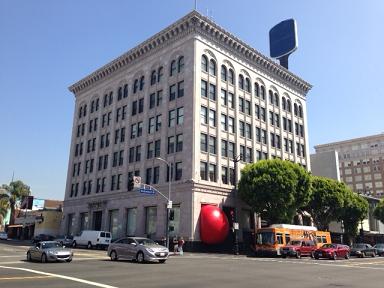 RedBall at one of its other stops.

BART riders using Embarcadero Station are in for a big surprise Tue., April 9 - a big red surprise to be more precise. A 15-foot  red ball will appear at one of the entrances to the station before dawn. Artist Kurt Perschke chose BART’s busiest station as one the sites for his RedBall Project sculpture installations for its high visibility. The project involves squeezing the inflatable mobile sculpture into the urban landscape around the world.

“The urban environment is overbuilt and full of possibilities, the project is about seeing and playing with the sculptural spaces of a city,” Perschke said. “The humor and charisma of the piece allow it access to the city and invite others in to its story.”

RedBall will remain at the station entrance until 7 pm then it will be deflated and packed away until its installation at the California Lottery offices in Sacramento on Wednesday. The Lottery is footing the bill for the RedBall installations in California.   After all, the RedBall looks like the lottery’s Power Ball on steroids.

How does RedBall move around so quickly? It’s got a team of handlers that inflate and deflate it each day and haul the 250 pound RedBall and its gear to the next location. The eye-catching art work has popped up in cities around the world, from Barcelona to Sydney.While RedBall’s presence on BART will be shortlived, it’s certainly not the only art to grace the transit system. Dozens of sculptures and murals are placed throughout the 44 BART stations and the popular series of art posters bring a dash of creativity to train car interiors.

Like all of the art on BART, RedBall’s impact on riders will be limited to their eyes and imaginations. The display won’t  affect access to Embarcadero Station and, as a precaution, will be monitored by two project staffers at all times.

To learn more about RedBall, visit the artist’s website at redballproject.com.