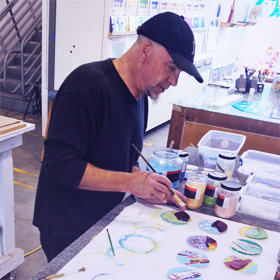 Gordon Huether, one of the country's most respected artists who specializes in major, site-specific art, is about to install one of his latest large-scale works in BART's Oakland Airport Connector, the train-to-plane connection now under construction, and scheduled to open by the end of 2014.

Soon BART riders will be able to see "A- Round Oakland” adorning the glass walls of the new station at the Coliseum end of BART to OAK, the shorthand for the new line. The composition involves 54 jewel-like "rondels," or circular pieces of glass, with three-dimensional compositions fused into them. The rondels will cover the length of the station with saturated color and pattern that will invite viewers to investigate more closely and engage in individual interpretation.

"I was thinking about aerial views of Oakland,” Huether said in a recent interview in his Napa, Calif., studio, recalling the beginnings of his idea. 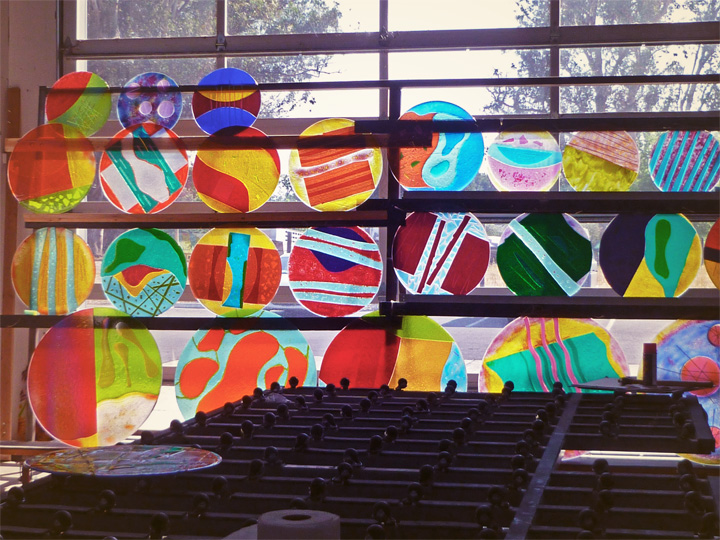 "The rondels can be interpreted in many different ways: if somebody just wants to see color and form…and wants to touch it and it makes them smile….or now they look forward to leaving from that station or arriving at that station, we're already successful. Now, if they want to go a little deeper and say, ‘gee, I wonder if that's an aerial shot over Oakland?' Or ponder something else? Right on! Have some fun with it." 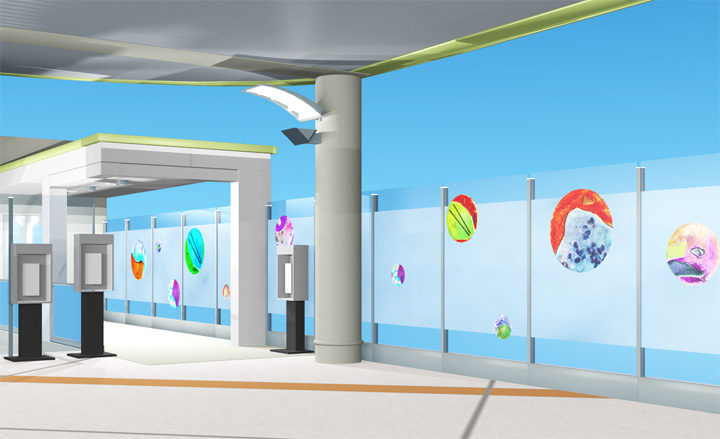 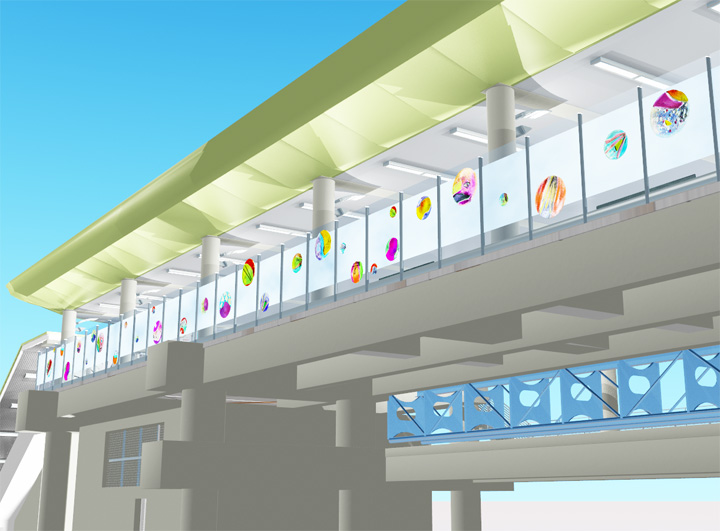 Huether's philosophy of public art holds considerable emphasis on the individual experience each person has while in a space; he believes that art redefines the relationship between people and the space that surrounds them. Ultimately, Huether says he wants to create a visual dialogue between the art and the architecture of the site; to bring storytelling and beauty into publicly shared spaces.

"Since I was a little kid I was already thinking about what I was going to do when I grew up," Huether recalled. "I always had this sense of urgency; as if life is like getting on a train and it just keeps moving and it doesn't stop until someday, you have to get off - and that's the end."

After training in Germany and Northern California, he set up his practice in Napa. He has been making art glass ever since. "I totally fell in love with color and light -- and stained glass was especially well oriented for being integrated into architecture."

His process in the studio has a free-flowing, energetic and personal quality as he evolves his designs using the tools of his trade: colored pieces of glass ranging from large continuous sheets to pebble-size chunks, all the way down to grains of glass the size of sand, known as frit. 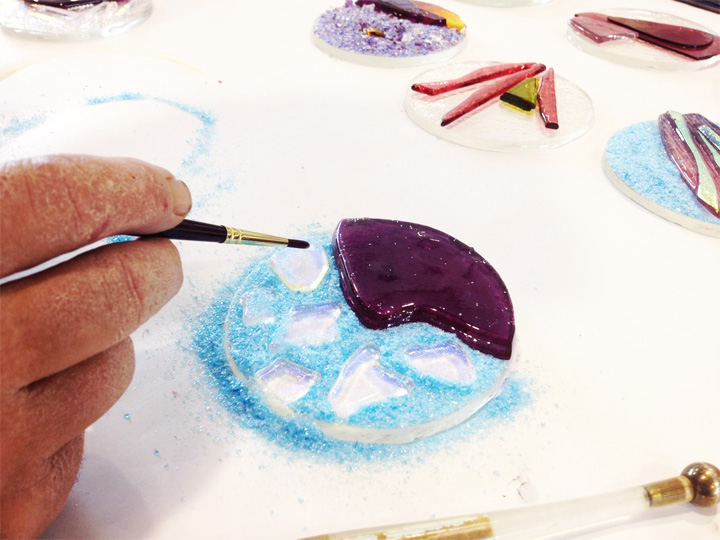 Gordon Huether working on samples in his studio

Huether described working on the BART to OAK Project as an exploration. "I would come in every morning and I would start cutting glass. I was able to come into the studio and be spontaneous -- almost like painting. For this particular project, it's more about being lighthearted, using color and inferred movement. I'm just trying to bring some color, some life and some beauty into what, typically, are fairly sterile spaces."

When he works, he keeps the viewer in mind. "I believe that for a lot of us, traveling can be very stressful; getting through security and catching your flight and the back and forth." 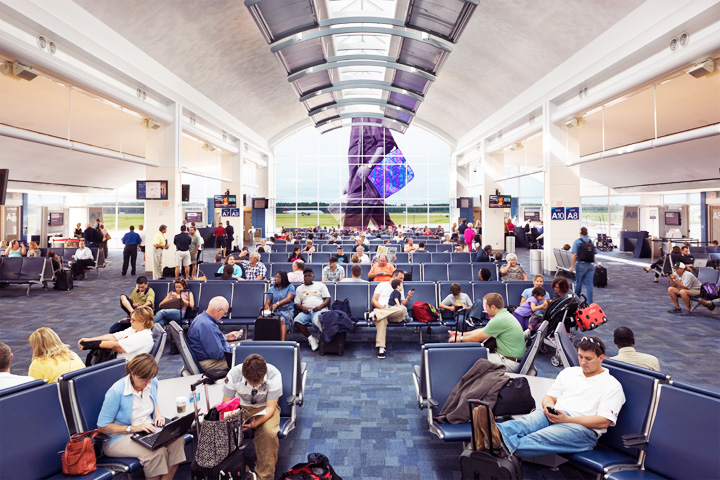 Over time, Huether has expanded beyond glass into other media and art forms, working in painting, sculpture, collage, and large installations fabricated in resin, fiberglass, aluminum, steel, as well as employing photographs, written text, colored paper, and found objects. He says his work is about "communicating a story, not just creating objects of beauty.”

He recently completed a 9/11 Memorial installation in the City of Napa using 6 beams weighing 30 tons from the World Trade Center – one of the few artists in the United States to request and receive more than one piece from the WTC.

Some of Huether's other major national projects include work at the Raleigh-Durham Airport in Raleigh, North Carolina; the William P. Hobby Airport in Houston, Texas; Salt Lake City International Airport, TRAX Station; the Lady Bird Johnson Mural at the LBJ Presidential Library in Austin, Texas; and the Jacksonville Airport in Jacksonville, Florida. Internationally, he has installations in places as diverse as Lossburg, Germany, and at the Hiroshige Art Museum in Tendo, Japan. 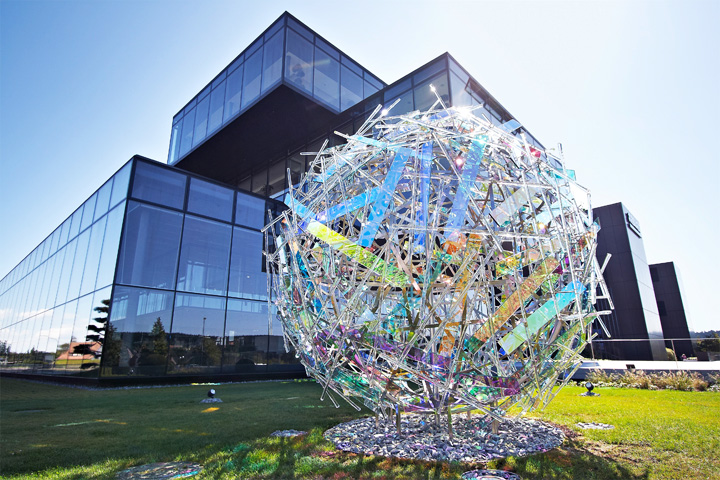 Later in the year, once the new station is through major construction and safe for visitors to enter, the public will be invited to tour the new station and see – and interpret – Huether's artwork for themselves.

For more information on Huether and his work, go to http://www.gordonhuether.com/