BART celebrates 20th anniversary of Bike to Work day on Thursday, May 8

BART celebrates 20th anniversary of Bike to Work day on Thursday, May 8 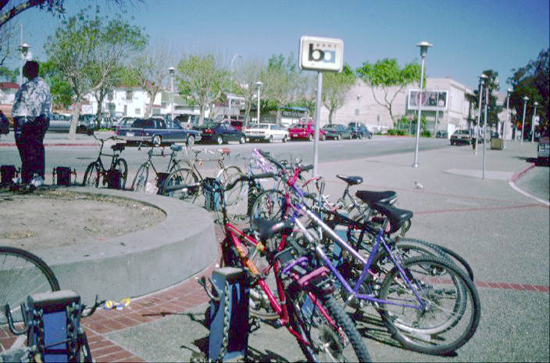 In 1994, BART required a Bike Permit and these early bike racks at Fruitvale BART did not allow use of a U-Lock. Fruitvale BART now has a Bike Station, secure electronic lockers, and BART has an all hours bikes-on-board policy.

Bike to Work Day returns this Thursday, May 8 for the 20th year in a row and, for the first time ever, there are no blackout times for bikes on BART. Thanks to a Board decision last year, bikes are allowed on trains at any time with the following exceptions: during non-commute hours, bikes are allowed on all trains except the first car and during commute hours (7:00 to 9:00 AM and 4:30 to 6:30 PM, weekdays), bikes are not allowed in the first three cars of any train. As always, bicyclists should avoid crowded cars.

Bike to Work Day is the largest event in California encouraging bike commuting. Of course, cyclists don’t need to take their bikes on BART in order to bike to work. Parking bikes at a BART station is safer and easier than ever.

The addition of more than a thousand shared lockers and the lifting of the bike blackout times are a reminder of just how far the relationship between bikes and BART has come.

“We can all celebrate the first Oakland Bike to Work Day twenty years ago in 1994,” reminisced BART Director Robert Raburn. “Despite the rain that fogged Oakland Mayor Elihu Harris’s glasses as he rode to City Hall, he and the public were enthusiastic. The public wanted elected officials and policy makers to focus attention on bicycle safety and access improvements. In 1994 we set an example that promised to reduce pollution and the following year Bike to Work Day became a statewide event.”

An avid bike commuter, Director Raburn will greet cyclists at one of the hundreds of Energizer stations  that will provide bike commuters with information and a goodie bags throughout the Bay Area Thursday morning. BART is hosting two events: Fruitvale Bike Station will offer snacks, drinks and more.  The Downtown Berkeley Bike Station really lays out the red carpet: fresh pancakes, juice and steaming hot coffee.

While there’s something old and something new in store for the 2014 Bike to Work Day, it promises to be even better next year thanks to a new facility in the works. Later this year an attended bike station will open at 19th Street/Oakland Station. Like our other Bike Stations, it will offer free attended or valet bike parking, sell bike accessories and even offer skilled mechanics for quick repairs or maintenance. The Bike Station will be able to handle 120 bikes and will be located on the street level at the corner of 19th St. and Broadway.

Finally, Bike to Work Day is a good day to remember that having your bike stolen is a huge bummer, especially since theft is largely preventable. Use two U-locks; cable locks just don’t get the job done any more. For more tips on bike theft prevention, bike commuting and more, see www.bart.gov/bikes