BART Board approves platform digital displays for advertising and news

BART Board approves platform digital displays for advertising and news

The BART Board voted to move forward with converting up to 34 existing poster ads located in three downtown San Francisco stations to 17 digital screens that will display a mix of advertising, news, weather and BART messages.

The decision came after a survey concluded there is strong rider support for the proposal, following a one-screen pilot program at Montgomery Station that began in April 2014.

The additional screens will begin to be installed as early as December 2014 at Montgomery St., Powell St., and Embarcadero stations, resulting in up to six screens per station. 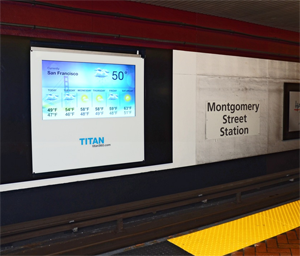 The 82-inch LCD screens will not make any sound and the graphics have limited motion. The screens will be located opposite each platform on the cross-track walls. Stations and locations are preliminary, pending final review by BART engineers.

Content on the digital screens will consist of 50% advertising, 10% BART messaging, and 40% other information such as news, weather, and sports.

“The displays add modern technology to our stations, provide useful information, and help brighten up the underground platforms,” said Aaron Weinstein, Chief Marketing Officer at BART.  “They will also bring in new revenue to help reinvest into our aging system, at no cost to our riders. More importantly, a strong majority of riders who were surveyed liked the screens.”

Fully implemented, the plan would eventually increase revenue by $1 million a year.  BART’s contracted advertising franchisee, Titan Outdoor LLC, will invest the money needed to purchase and install the screens and network.  Titan will be reimbursed for the capital costs with the initial revenue generated.

During the one-screen pilot, BART conducted a survey to gauge rider reaction to the digital display.  The survey was a random sampling of 415 riders who viewed the screen at Montgomery.  A third-party research firm administered the surveys and provided the results, which included the following: