The Board of Directors on Thursday is scheduled to hear results of public input on BART’s Fleet of the Future and to vote on two key design choices for the new trains: floor-to-ceiling poles and bike racks.

In spring 2014 a model of the new train car was set up at 10 outreach events where the public could tour it, ask questions and fill out a survey.  More than 17,000 visitors attended, and their feedback was overwhelmingly positive on all of the 10 train features they were asked to rate, from exterior appearance to comfort of seats to the poles and bike racks.  From 79% to 95% of respondents rated each of the features good or excellent. (For full results download the PDF of the presentation that will be made to the Board). 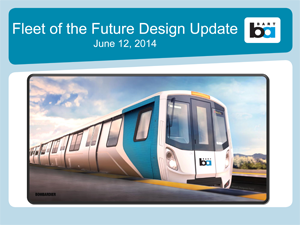 Combined with earlier feedback collected over the past three years, that means nearly 35,000 people have weighed in on the Fleet of the Future. Details on the design and public outreach process can be found at www.bart.gov/cars.

“This latest customer survey gives us the feedback we need to make final refinements to the design before assembly of the train cars begins,” said Aaron Weinstein, Chief Marketing Officer.

Examples of decisions made in response to previous customer feedback include easier-to-clean, wipeable seats; a new type of doors that will seal out noise to provide a quieter ride; and improved information on digital screens and automated announcements.

Refinements from the latest round of customer feedback include adding armrests on seats next to doors, increasing the number of hanging straps for people to hold onto, and lowering the height of the intercom to make it more accessible for people who use wheelchairs.

The new fleet will have more capacity.  Although on average there will be 4.6 fewer seats per car, BART has set a goal to increase the fleet to 1,000 cars from just 669 today, which will increase the overall number of seats in the fleet by 38%.

“The new train cars will bring relief from cro

wded conditions on BART,” said BART Board President Joel Keller.  “The first 100 of the new cars is set to roll out in 2017, with more to come in each of several years thereafter.  That will allow BART to lengthen trains that are currently shorter than the 10-car limit.  And eventually, after a companion project to upgrade the train control system, BART will also be able to run more trains, more frequently.”

The Board is scheduled to take action on staff recommendations regarding two of the new train features that had generated some of the most intense discussion.

One, the poles, is the focus of some people with disabilities, particularly those who use wheelchairs, who are concerned the poles would make access more difficult.

“The purpose of the poles is to provide a stable handhold for shorter people who can’t reach overhead bars, seniors, and people with mobility or balance issues,” Weinstein said. “On the other hand, many people who use wheelchairs, have told us that the poles are in the way.”  “We’re looking for a solution that best meets everyone’s needs.”

About 7,000 people took the survey after touring the model car, and of those 942 identified themselves as having a disability.  More than two thirds of respondents with disabilities (72%) rated the poles excellent or good.  While the pole was particularly popular with seniors and people with balance or mobility issues, many people who use wheelchairs or are blind gave low ratings to the pole.

The Board will consider several alternatives to strike a balance that meets everyone’s needs: Alternative 1 moves the poles further away from the wheelchair areas on all cars; Alternative 2 removes poles from the middle door area on all cars; and Alternative 3 removes two poles from each cab car (“cab” cars, with room for a train operator, make up 40 percent of the fleet). The staff recommendation to the Board is a hybrid of Alternatives 3 and 1: Remove two poles on cab cars, and shift poles further away from wheelchair areas on non-cab cars.

BART had worked closely with its advisory Accessibility Task Force over the past three years to address a host of issues intended to improve access, and many are part of the design plan. For example, there will be floor markings for wheelchair areas, wider aisles, intercoms near doors and automated announcements for customers with vision impairments.

On the bike rack issue, there are three options from staff: Alternative A puts one bike rack on all cars (as seen in the train model); Alternative B puts one rack in non-cab cars only; and Alternative C removes bike racks altogether. The staff recommendation to the Board is Alternative A.

After the Board vote, the design phase ends, and the manufacturer will begin assembling pilot cars for testing on the BART system in 2015 to prove safety and reliability.  After that, general production will begin, with more than 100 new cars going into service each year beginning in 2017.