Secure bicycle parking will more than triple at Civic Center Station thanks to a move by the BART Board of Directors Thursday night. The Board okayed a plan to use more than a half million dollars in grants to increase the number of bicycle spaces from 63 to 216.

89 of the spaces will be in an area accessible by BikeLink smart card holders, similar to facilities at Embarcadero and Ashby stations. An additional 60 spaces will be constructed adjacent to the smart card facility in the free area of the station. These spaces can be merged with the smart card facility in the future if there is enough demand. The paid area will include more space-efficient racks to accommodate more bikes and improve pedestrian flow.

Officially, the Board voted to authorize the General Manager to award a contract of $539,680 to LC General Engineering, Inc. to construct the new facilities.

This is the latest in a series of projects to increase secure bike parking at BART. BART’s Bike Parking Plan calls for 2,000 additional secure bike spaces at 18 stations. Although the BART Board voted in October 2013 to remove “blackout” times to bring bikes on trains, providing more secure parking at our stations remains an equally important element to increase access for cyclists. The comprehensive approach to attract more bicycles and fewer cars to BART is detailed in the 2012 BART Bicycle Plan.

Construction on the Civic Center Station bike station is expected to be complete in 2015. As the prime contractor, San Francisco-based LC General Engineering has pledged to exceed goals set forth in BART’s non-discrimination in subcontracting program. The company has committed to 59.5 % Minority Business Enterprise participation and 20% Women Business Enterprise participation. See the Office of Civil Rights web page for more information. 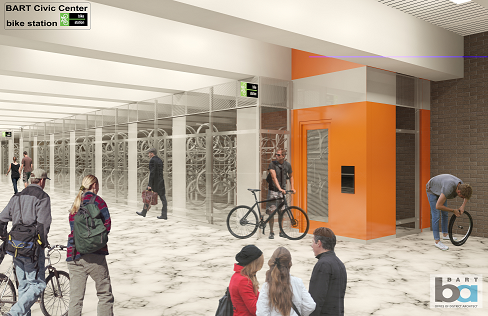