With more riders bringing their bikes to BART, 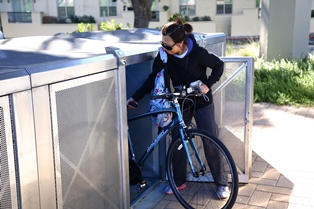 Bike East Bay and BART have announced a new partnership to prevent bike thefts at BART stations.  From now through the summer of 2015, representatives from Bike East Bay will be at BART stations throughout the system during the evening commute to share bicycle security tips and hand out free theft prevention materials.

“Bike theft is an ongoing problem in the Bay Area, but with the right equipment and knowledge cyclists can significantly reduce the chances their bikes will be stolen while riding BART,” BART Board member Robert Raburn said. “While we now allow bikes on board during the commute, we also want to encourage cyclists who don’t need their bike on both ends of their BART trip to take advantage of bike parking at our stations.”

The program, which targets a new BART station around the system at each outreach event, will also provide cyclists and potential cyclists with:

BART and Bike East Bay are also using the outreach as an opportunity to remind cyclists of our bike rules.  “If you need to have your bike for both parts of your trip, remember good bike on BART etiquette: no bikes on the first car of a train or the first three cars during the peak commute, avoid crowded cars and please don’t carry your bike on the escalators,” Bike East Bay Executive Director Renee Rivera said.

The calendar of outreach events through the end of 2014 and a list of bike shops participating in the U-lock discount program are posted at https://bikeeastbay.org/BARTBikeTheft

Tips on how to prevent bike theft can be found at www.bart.gov/bikes

BART has several projects in progress to increase the supply of secure bike parking: