Before and after: Stations getting a makeover

Before and after: Stations getting a makeover

An ambitious station modernization program is underway at BART that combines short-term “early wins,” such as replacing lighting, freshening paint, repair work and scrubbing walls and floors, with medium- and long-term efforts intended to make stations more safe, clean and inviting places to be. 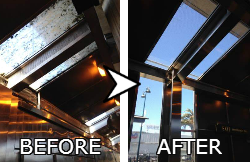 The BART Board of Directors heard a presentation about the program at a recent Board workshop to discuss station-level needs and priorities for the future. Early wins are small-scale improvements that are easy to implement, high-touch to our customers and relatively low in cost, explained Tim Chan, Manager of Planning in the BART Planning and Development Department.

These efforts are focused on five stations that were identified as being first on the priority list: Coliseum, Powell Street, Civic Center, Embarcadero and Montgomery Street. Stations were selected based on customer feedback about station cleanliness and included an assessment of what could be done within a two-to-three-month period at each station.

“We’ve heard lots of comments about our stations, so we’ve created a program to get these things done,” Chan said. “We are planning and coordinating with BART cleaning and maintenance crews to brighten our stations.” 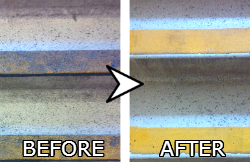 The program targeted Coliseum Station first. In before and after photographs, you can see a major difference between bland, blah beige walls, later painted in vibrant primary colors. Panels in the ceiling -- previously so covered in gunk they were impossible to see through – have been cleaned crystal-clear so the blue sky is visible above and the sunlight streams in.

At Powell, the station now getting the most attention, a good example is a stairwell and escalator entry that used to be gray and dirty from years of wear. Duct tape was stuck messily to walls and the floors were dingy. Now that same stairwell reflects a deep cleaning that put the iconic white-bubble wall tiles back to their sparkly pristine condition.

"Funding for the current program is in our current fiscal budget and is also proposed to be in the next fiscal year budget," Chan said.

The medium- and longer-term parts of the station modernization program are called “systemic” projects and “gateway” projects. 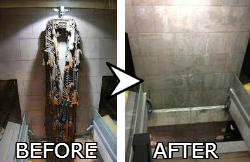 Systemic investments are similar improvements at multiple stations, and include items like replacing/renovating escalators and installing canopies over them, and wayfinding and real time displays.

Gateway investments are “transformative” -- comprehensive -- improvements that create a major showcase out of stations. Currently, the gateway improvements are planned for 19th Street, El Cerrito del Norte and Powell Street stations, with project completion anticipated in the 2017-2018 time frame.

“More of these improvements will be done at these and other stations as funding becomes available,” Chan said.