Around 150 people with disabilities and senior citizens from around the Bay Area got an unusual vantage point on the BART system Wednesday, by participating in what's known as a Train and Track Tour. It's a special opportunity to get up-close and personal with the BART system. 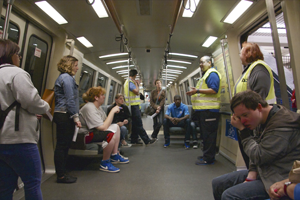 Coordinated by BART's Access Department and Berkeley's Center for Independent Living, the tour involved many BART staff's collaboration from Station Agents, to Safety Experts, to Training Specialists, to the Train Operator who brought a special out-of-service train into 19th Street/Oakland Station where the tour occurred.

"BART has made some good strides lately for people with disabilities and to provide this kind of knowledge to people is pretty powerful." 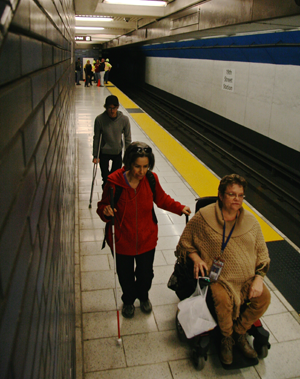 The tour included areas such as the concourse level, with information on how to use a ticket vending machine and faregates, to the platform level, with an in-depth tour of a train.

UP CLOSE INSIDE A TRAIN

People with visual disabilities, for example, were instructed in how to find the intercom button that would let them communicate with a train operator.

A highlight for many, though, was the chance to actually walk down a short flight of stairs and experience what it is like to move along the trackway on foot. A participant ran her hand along the smooth metal of the running rail, feeling its width and depth.

Manager of Operations Safety Ni Lee warned the participants it could be dirty along the track. 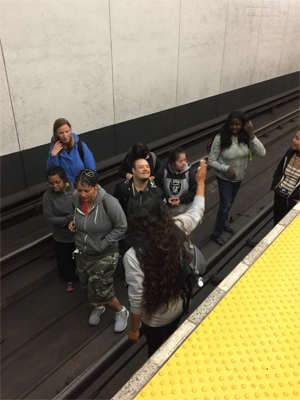 She also described the general area of the electrified third rail, which no one went near for good safety practice, even though it was powered down.

And she told them about a special area, known as the "refuge zone," that is an alcove of sorts underneath the platform side of the trackway.

"I hope that you never, ever have to use this area," Lee said.

However, should a person with a visual disability fall into a track area, the space could provide enough safe refuge for them to roll out of the way until an approaching train had passed, she said. "I want you know where it is and what it would feel like, even though I hope you never have to use it," she said. 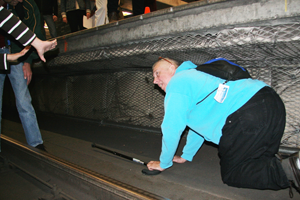 One by one people crouched down into the refuge area, feeling it, sensing it. "It's not as bad as I thought it would be," said one participant, who came away with smudged fingers.

It was dry and free of any trash, much less the rodents that some had heard tell of. Students from the California School for the Blind in Fremont were among the tour participants.

In addition to the tour, participants could visit tables where they could get more information on topics such as wheelchair marking and tethering straps, Clipper Cards, Access Alameda Guides, the 2-1-1 Human Services information line and other resources. 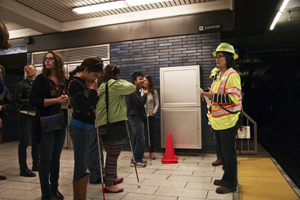 It's hoped that BART will be able to repeat the tour every other year going forward.

HOW TO GET INFO

You can watch a video from our archive of a previous Train and Track Tour for people with vision impairments held in 2007.