With input and guidance from the Bay Area Suicide and Crisis Intervention Alliance (BASCIA), BART is launching a multi-pronged, continuous campaign to address the recent increase in suicides and suicide attempts on District property.

“We looked at what other transit agencies have done on the topic and with the help of local mental health experts, determined what steps would be appropriate for BART,” said Deputy General Manager Marcia deVaughn. “Posting a help line and providing training to our employees are some of the key things we can do as a transit agency.”

The centerpiece of the campaign launch is station signage directing troubled patrons to call the toll-free National Suicide Lifeline, with the phrase ‘Suicide is not the route’ included over the number. This phrase has been tested in a Long Island Rail Road campaign that has seen an increase in calls to the number.

The Federal Government administers the National Suicide Lifeline, providing a service that redirects calls based on the caller’s area code to the appropriate local agency for free, confidential help around the clock.  Signs will be rotated throughout the system across from the platforms. 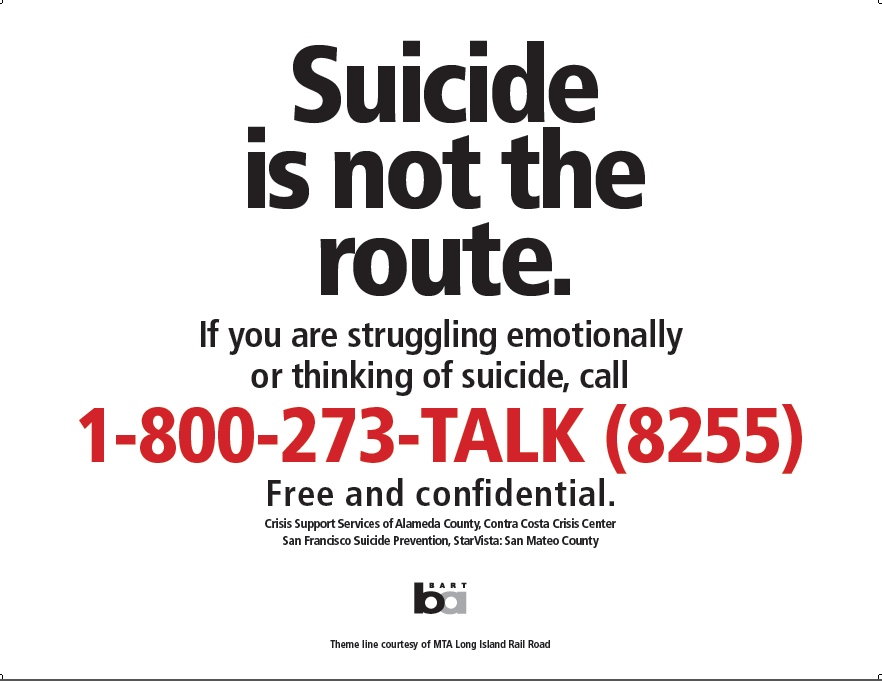 Another key component is training frontline BART staff on how to recognize and help a person in crisis.  BASCIA will assist BART with this training.

BART will be distributing National Suicide Lifeline wallet cards provided by the Substance Abuse Mental Health Service Administration in all stations.  Each Station Agent booth will have the cards available.

Longer term ideas being looked at include printing the suicide lifeline number on BART papers tickets, permanent signage in stations, coordination of outreach events, and looking into the feasibility of and funding for platform screen doors.

"We are pleased that BART reached out to us for help with this important issue, and we appreciate their help in getting our Lifeline number out to the public,” said Nancy Salamy, Executive Director of Alameda County Crisis Support Services.

Also present at the campaign launch was Kevin Hines, a suicide attempt survivor and expert lecturer on tackling the subject in a way that reduces the stigma associated with mental health disorders.  Mr. Hines praised BART’s efforts, and encouraged a continued discussion on preventing suicides in the Bay Area.

At the end of last year, BART assembled a comprehensive task force to determine what could be done to offer help to people in crisis.

Incidents of a person hit by a train or nearly hit by a train at BART have risen from six in 2013, to 14 in 2014. This year has seen six incidents to date.