Board adopts Warm Springs fare at night board meeting

Board adopts Warm Springs fare at night board meeting

With the Warm Springs extension project rapidly approaching completion, the BART Board of Directors voted to adopt the station’s new fare schedule during its night meeting on July 23rd.

The Warm Springs Extension adds 5.4-miles of new tracks from the existing Fremont Station south to a new station in the Warm Springs District, and is expected to enter service this coming December.

The fares are calculated in the same distance-based way that BART has always planned fares, and all discounts offered on the rest of the BART system will be given at this station. Polling was conducted in 2011 and 2015 and determined that approximately 70% of riders feel the fare is fair.

Below is a sample fare table that includes both regular fares and discounted fares from various stations to the new Warm Springs station. 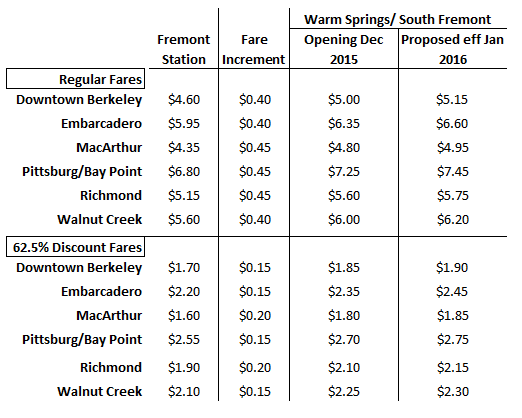 For the complete agenda of the July 23rd meeting, please click here. You can watch an archive of the meeting at www.bart.gov/board

**This article was updated after the fares were adopted by the Board.