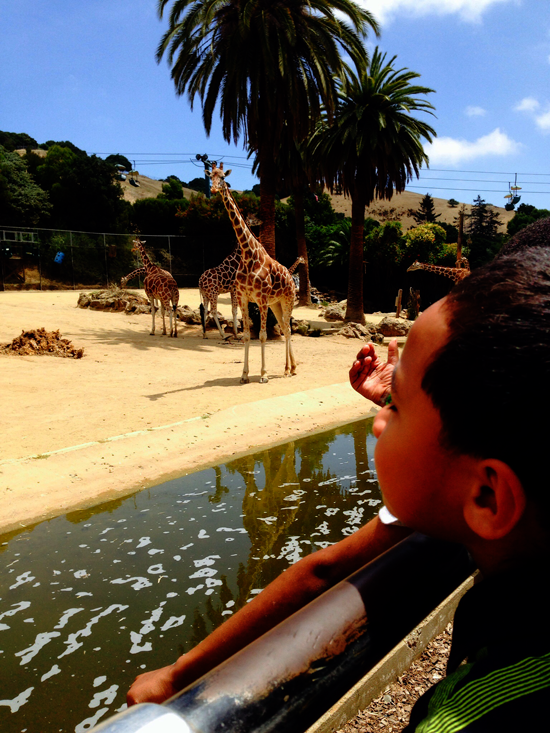 Adowende the ball python slithered along the floor just inches in front of the youngest kids, her v-shaped tongue flicking through the air. Ms. Betty, the Oakland Zoo  educator leading the presentation, asked if anyone know what Adowende was doing.

"She's smelling!" a child answered, after raising his hand to be called upon. "Great answer, that's right," Ms. Betty said. She explained that the tongue was like a  steering wheel, receiving chemical signals that allow the snake to perceive both predators and prey, and move in the right direction to eat -- or avoid being eaten.

The 25 kids from Matt Jimenez Community Center in Hayward got up-close and personal with several of the zoo's animals in a special presentation before they galloped off to explore the zoo on a field trip last month as part of BART's summer youth tour program.

The program is organized by staff from BART's Government and Community Relations Department, which partners with community groups serving youth in the BART District. This summer the program will give about 400 children in grades K-12 experiences they may never have had, all using public transportation to visit educational and cultural destinations such as the zoo, the Asian Art Museum in San Francisco and the Oakland Museum of California. 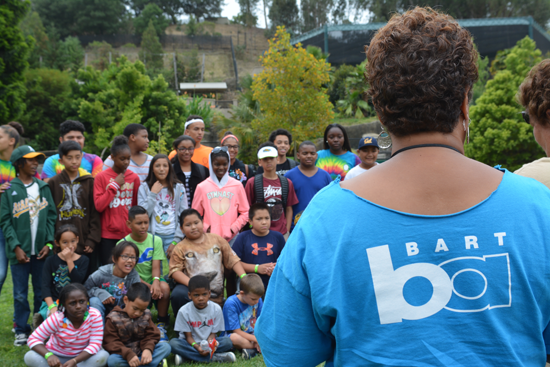 Community center recreation specialist Cheryl Denton praised the BART program because "it gives a lot of these kids the opportunity to go places where they've never  been. A lot of our families are low-income families and they just don't have the resources to get out there. We are very thankful that BART teamed up with us and we're able to take this trip."

Indeed, it was the first trip for some even on BART. Part of the intent of the program is to familiarize the children with public transportation and open their eyes to greater opportunities. 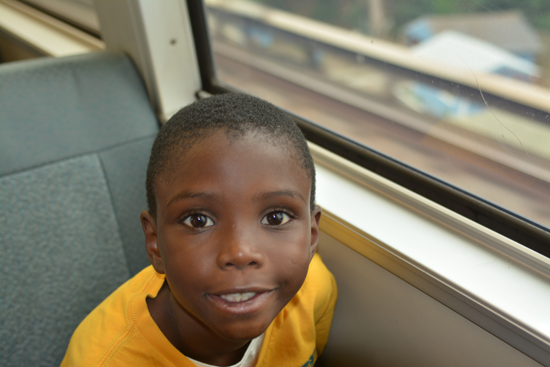 Ranging in age from 4 to 13, the kids are part of the center’s summer youth camp. As they piled into the South Hayward BART Station to begin the journey their  chaperones stood around them, answering their questions about the fare system, the schedule, and the trains themselves.

Lisa Moland of BART took a few moments to  instruct the children on how to act on the transit system. “Stay safe,” she told them. They needed to stay out of the trackway under all circumstances, keep off the  yellow tile, and make sure to step over the gap between platform and train. After getting off the train at Coliseum Station, they boarded an AC Transit bus that took  them to the zoo.

While they waited for their educational presentation to begin, the kids burned off some energy by climbing on the sculptures of caterpillars, ladybugs and other creatures at the zoo's entrance. Jacob Shur, a former youth camper now a high school volunteer chaperone, said the Matt Jimenez Community Center and the opportunities it provides change children's lives for the better.

THIS IS SOMETHING THAT REALLY MEANS A LOT TO THEM 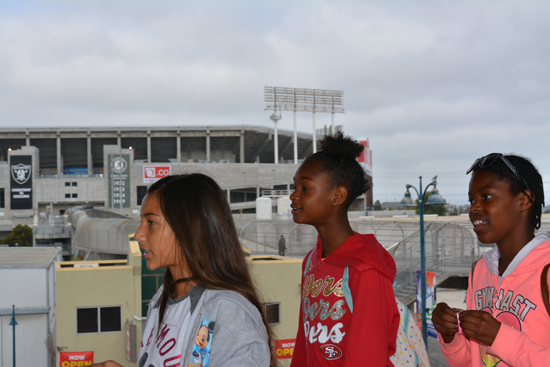 "I’ve been coming here (to MJCC) since I was eleven years old," he said. "It’s just been something that was a part of my childhood. I do think that this is big for kids’ lives,  that this is something that really means a lot to them. I think that for them to ... come here it’s something to get them off of the streets and things like that. This is definitely like an escape. You get to learn about the animals and maybe they’ll be working with animals when they’re older."

He said it was simpler than you'd think to take 25 excitable young kids on a BART trip. "They are very respectable kids," he said. "They listen; they weren't talking  too much. They followed the rules that we set for them. It's fun, helping these kids grow up." Shur's younger twin brothers were among the participants.

The children showed their good behavior as they filed into the education center and followed instructions to be quiet, so as notto scare the animals, and take their  seats, older ones around the table and younger ones on the carpet with legs crossed and bottoms on the floor. 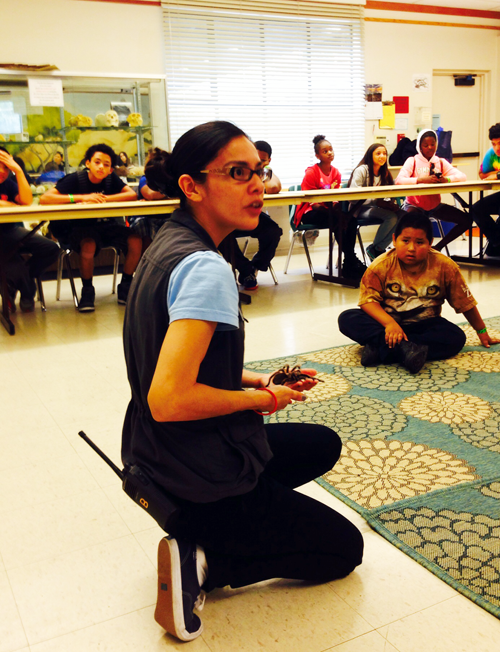 As the kids sat quietly, Ms. Betty brought the first animal out of a container: Carolina, an Eastern box turtle, 36 years old. They talked about the importance of adaptation for animals, such as Carolina's hard shell that protects her from predators, or her coloring that provides camouflage for her among fallen leaves in the wild.

An apparently experienced program animal, Carolina gamely squiggled her head and legs outside her shell, looking the children straight in the eyes as they gave a two-finger rub along her back as instructed. She never once pulled back into her shell.

Next was Isidora, a Chilean rose-haired tarantula, making her first-ever appearance at a program for children. There was no touching with Isidora, not because she was  dangerous, Ms. Betty explained, but because the hairs that covered her body and legs can be shed as a defense if she feels threatened, and can irritate the skin of
those allergic or sensitive to the hairs.

The curious kids leaned in for a close-up look at her compound eye, her eight legs, and her pinkish-brown hairs as Ms. Betty brought her around slowly so each child could get a view. They didn't squirm away (unlike at least one of the arachnophobic adults in the group). 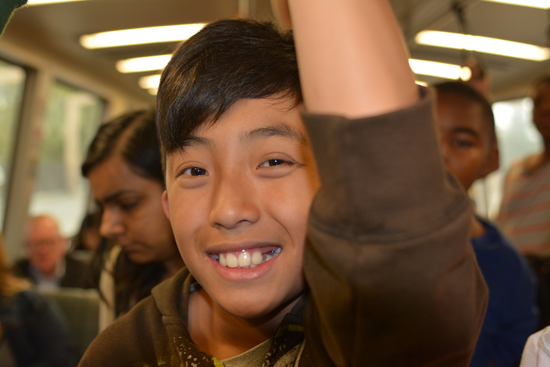 Ms. Betty explained the positive role spiders have in eating more troublesome pests, like mosquitoes, and said spiders in  the house can even be a sign of healthy air because they are very sensitive to poor air quality.

Then came Juba, the spiny-tailed lizard native to the African desert, who got the two-fingered rub treatment again as the children touched her scales, rough like  sandpaper.

Juba adapts by burrowing into the ground with just her spiny tail left out, waiting to smack any predator that might come along.

Finally, the show-stopper, Adowende the ball python, so called because she rolls herself into a ball for security. Ms. Betty brought her around for each child to touch, and the snake curled around her arm and wrist. After discussing how the python eats its prey by crushing it dead then swallowing it whole, Ms. Betty explained that the zoo uses mice (already dead, frozen and reheated) for the once-a-week feeding that sustains the snake.

The children gleefully touched the gorgeous colored patterns of her scales. "She's not slimy at all!" said one. Ms. Betty even put Adowende on the ground right in front of the youngest kids to demonstrate her graceful movement. 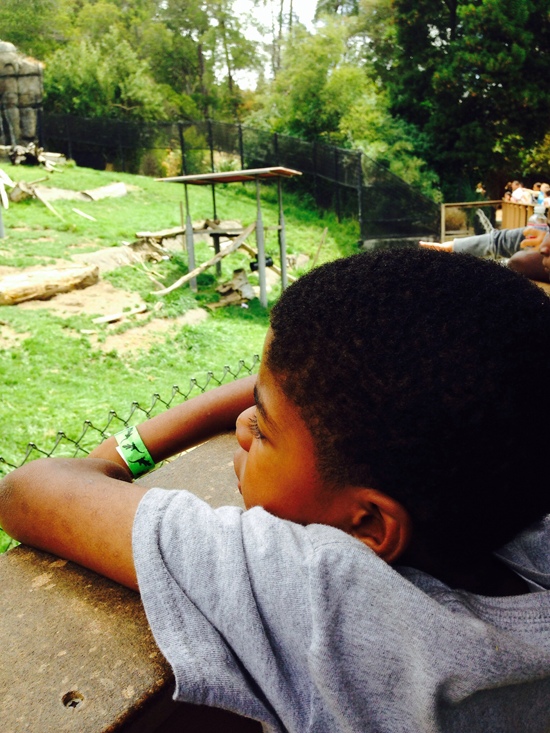 After the lesson it was time to fill up on lunch, then fan out around the zoo in groups of five each with a chaperone. One group looked on in awe as a giraffe plopped  down to sit; another group giggled when a baboon used a stick to scratch his behind. A curious baby baboon ran around playing with what looked like a rubber toy of an Orca while his elders lounged in the sun. Warthogs were cooling off on the hot day by rolling in a sloppy mud puddle. So many animals, so little time!

A worn-out group returned by bus and BART to South Hayward Station, only about a mile from the community center, for the walk back to end their busy day.

Denton said  the kids were still talking about their trip to the zoo the next week.

"They were all so excited and had a great time," she said. "I hope we get to do it again next summer."

HOW TO BE CONSIDERED
FOR THE PROGRAM

If you are with a community group in the BART District that is interested in future summer youth tours, contact Amanda Cruz of the Government and Community Relations  Department, [email protected], for more information or to be placed on a list for consideration.