UPDATE: This repainting work was completed on Friday Feb. 12, 2016.  We hope you enjoy the bright art work that was repainted by the artist following earthquake retrofit work.  Read more about the project below. 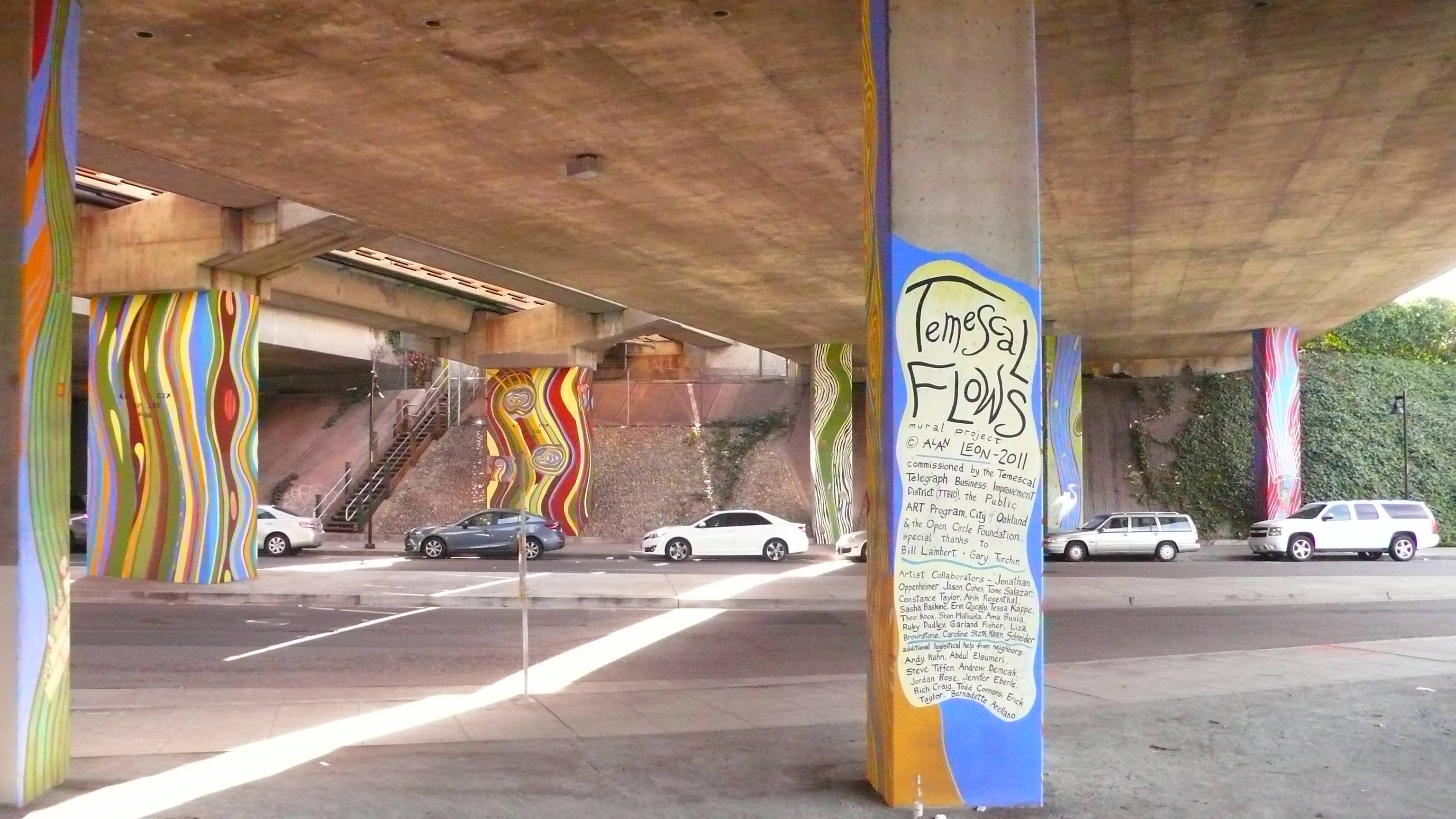 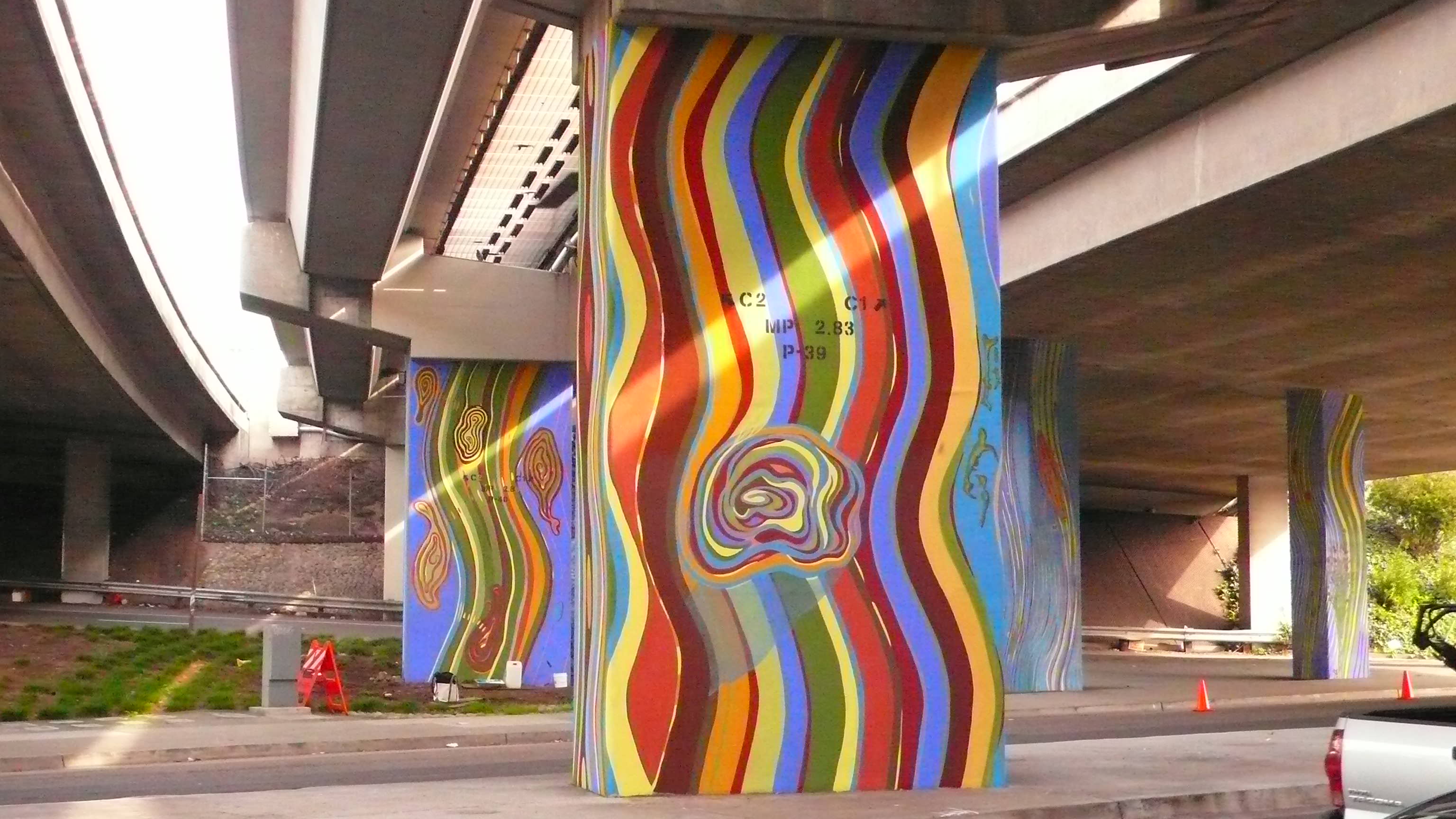 If you're a fan of the "Temescal Flows" artwork that brightens the gateway to Oakland's busy Temescal district, don't be too concerned if you see work crews removing the colorful swirls from two main columns that run under the BART tracks above.

As part of overall earthquake safety work, the paint is scheduled to be removed from those two columns starting today,Thursday, Nov. 5, 2015 -- but the artist who created the original art will be re-creating it after the earthquake work is done. 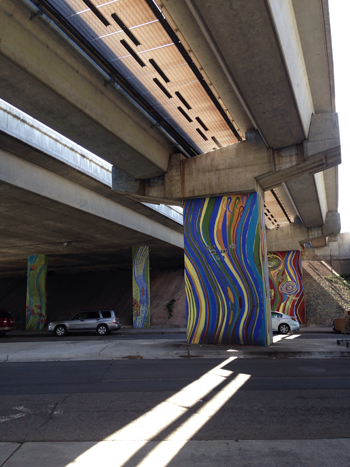 "I want to make it more beautiful, crisper, but a very, very similar design," said Alan Leon, a public artist with a page on his website dedicated to photographs of the mural. It was first painted in 2011-2012. "I hope to improve any parts that seem less sharp, using the right paint for the new surface."

Other parts of the mural don't have to be redone, and will remain to grace the area during the work. "The BART columns are the most massive of the columns so they stand out," Leon said. "They're the chunkiest, the biggest. They have little spiraling flow eddies that are more visible. The spirals unravel a little bit, and on the side facing Children's Hospital it looks like orbs rising through the waving lines, kind of like a lava lamp."

"The whole idea behind this mural was that, since the Temescal Creek flows underneath in that area, I wanted to create an organic, wave-like form that goes across the wall and down the columns. It's a very simple idea, really," Leon said.

"Temescal" (with variations in spelling) is the word for a type of sweat lodge or steam bath that originated with indigenous peoples and was used for spiritual and health purposes.

The bright colors liven up an area that might otherwise feel somewhat dark and cold; an area that provides pedestrian access between Children's Hospital on one side, under the freeway and BART tracks, and Shattuck/52nd Street on the other side, in the booming Temescal neighborhood.

"The primary impetus for us to pursue this was to counteract the impact of dividing the neighborhood back in the '60s when the BART tracks went through," said Bill Lampert of the Temescal Telegraph Business Improvement District, one sponsor of the mural project.

"We also put new pedestrian lighting along that walkway, and now we have improved lighting and an artistic walkway connecting the Children's Hospital area with the Temescal district. We've greatly enhanced the formerly broken connection. It's a nice gateway marker as well."

"It does change people's decision to walk through there," he said. The timeline for when the painting will be replaced depends on Leon's schedule and is weather-sensitive. The hope is to replace it as soon as possible.

One recent day, walking through the corridor, one could observe steady foot traffic: women pushing strollers from the hospital side toward the business side; medical workers in scrubs walking back from possible lunch breaks; youth with backpacks who appeared to be students. There were also a couple of makeshift tents pitched high along the ledge of concrete, with people sitting outside to catch rays of sun that dappled through from overhead.

"It has been very well received by the community as a nice mixture of tradition and modern art," Leon said. "It's like color therapy just to walk under there. I feel very privileged to be able to do something that is so much in the public view."