So far it’s only one sign, in only one station --  but changes are coming to the destination signs on BART platforms that will result in them being larger and easier to read.

“You’ll definitely be able to tell the difference,”said Kevin Copley, manager of the computer systems engineering department at BART. 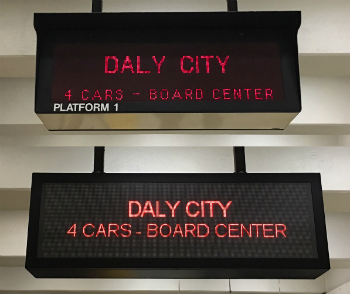 The first of the new signs went up two weekends ago at Civic Center, and has received some positive feedback from riders.  (In image, new sign is larger one in back; old sign is at front.)

Next on the list will be replacing all the signs at the downtown San Francisco stations (Civic Center, Powell Street, Montgomery Street and Embarcadero) and at one other station yet to be determined. The goal is to have all those, which are some of the busiest stations, up in the next three to four months. Others will come later as testing and improvements continue along the way.

Known as “destination sign units” or “DSUs”, the platform signs last were replaced around 2000, so they are getting older and less reliable. You may notice chunks of a message that don’t light up, or other flaws in a sign’s display.

In the new sign, all the letters and numerals are equally bright, consistent and easy to read. The color is also a more amber-orangey-red hue, as opposed to the candy-apple red of the old signs.

The old signs being uninstalled to make way for the new signs will provide a source of spare parts to extend the life of the signs remaining at other stations, Copley said, and to repair those with problems.

The new sign at Civic Center is 38% larger and has higher resolution and a higher-contrast appearance than the old ones.

One rider who posted a photograph of the new sign to Twitter noted, “I like the new signs, noting the larger size and a new font that is “easier on the eyes.”  They also have full color capability for improvements that may be added in the future.

The new style of platform sign also will be used for the Warm Springs extension and the East Contra Costa County, or eBART, extension.

For history buffs who remember the signs before the year 2000, yet another technology was in place. That was something called the “Nixie tube,” generically known as a cold cathode neon readout tube.

If you have any feedback on the new sign, you can submit it on our contact page: bart.gov/contact