Less crowding and fewer equipment related-delays are the important goals of BART’s “Big 3” capital improvement projects.  The new train cars, an expanded facility to maintain the much larger fleet, and a 21st century train control system are all linked and essential to relieving crowding. No one single element can operate optimally without the others.  These three projects will boost capacity by increasing the number of cars and seats available system wide and the frequency of trains on the track during rush hour. The three projects will also increase the reliability and safety of the system as a whole.

Although new trains and a new maintenance facility are fairly concrete concepts that are generally understood by everyone, train control is a bit more abstract and works behind the scenes.  Even though it’s not a visible part of the daily rider experience, it’s hard to overstate the importance of train control because it’s the brain of our operational system.

WHAT DOES A TRAIN CONTROL SYSTEM DO AND WHY IS IT IMPORTANT?

It’s the system that monitors and manages train locations, ensures safe and efficient train movement, and manages trains to a timetable.  A major milestone on the road to replacing the 1970’s era BART train control system recently occurred when the Board authorized the solicitation of proposals for the Train Control Modernization Program using a “Design-Build” method. That's construction-speak for hiring a single entity that will have the responsibility to design, build, install, integrate, and commission the new train control system.

"Train control is safety-critical," said Tom Dunscombe, BART's Group Manager of Train Control Modernization. "Train control will slow down and safely stop the trains as required for normal operations or in the event of an equipment failure.”

NUMBER ONE CAUSE OF DELAYS 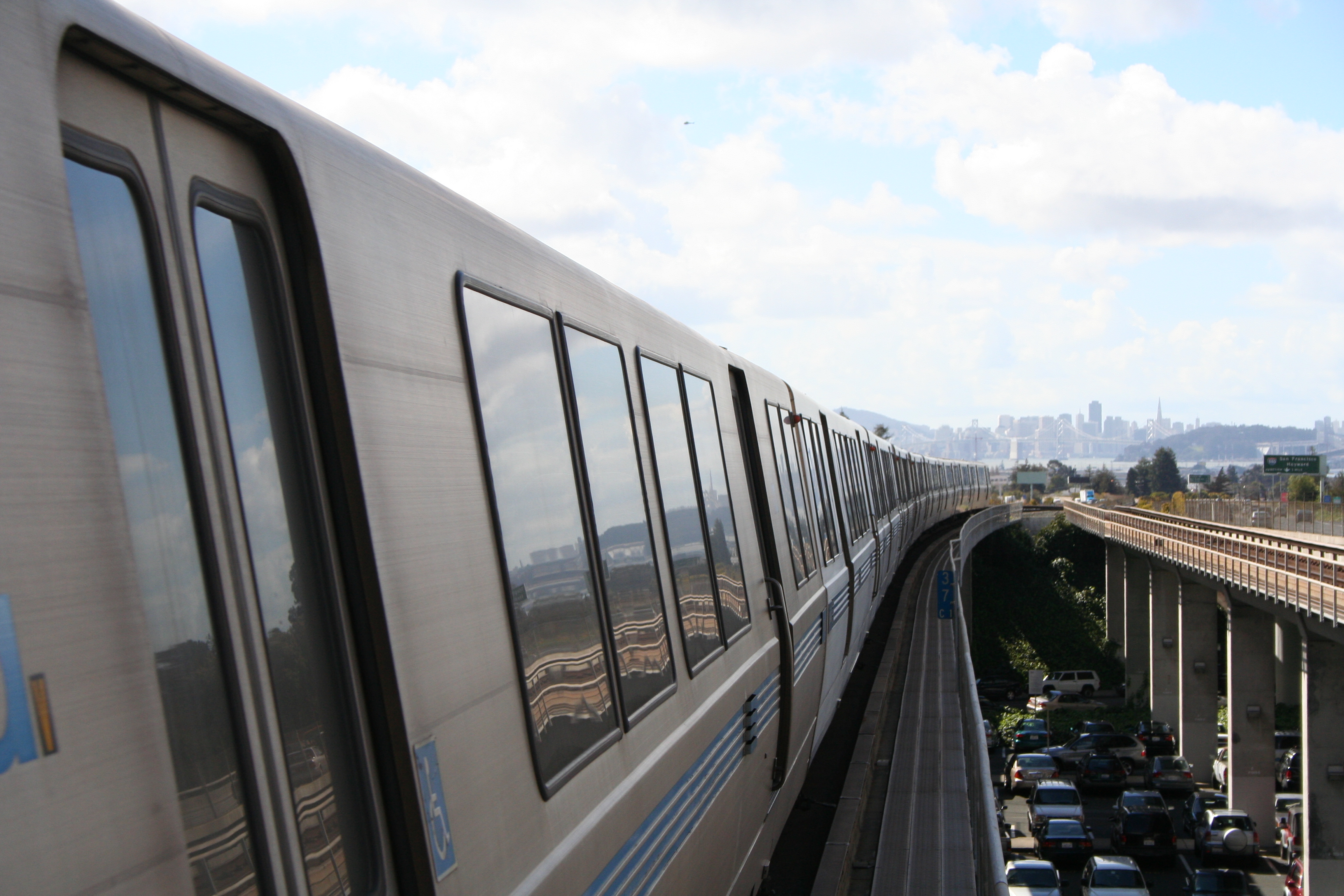 Currently, more than half of BART’s infrastructure related delays are due to the train control system, causing BART riders to face more than 400 hours of delay each year.

In the latest Quarterly Performance Report, for the quarter ending March 2016, train control problems resulted in 997 late trains.  Train control problems often accounted for more delays than police incidents, track problems, equipment problems on the trains themselves, and maintenance work. So, it's clear to see how improving train control will improve the passenger experience.

The current train control system is called a track circuit-based system with hard wired electronics.  In its day, it was cutting edge.  It divides BART’s entire 104 miles of track into smaller fixed segments, or “blocks.” Imagine a series of hotel rooms with adjoining doors. A train is not allowed to use an adjoining door to enter a room until a train in that room has exited through the other adjoining door.

This “go, no-go” movement is managed digitally through a system that’s based on the track circuit. The train control fixed blocks are just like the hotel rooms – you can’t move the walls.

The system that will replace the existing train control system uses a different approach. Imagine each train travelling down the tracks inside its own flexible bubble. The trains inside adjacent bubbles can’t touch each other but the outside of the bubbles can touch. This is a moving-block, Communications Based Train Control (CBTC) system. The trains constantly communicate through continuous radio coverage, so that every train in the system can continuously report its precise location to maintain a safe distance. Instead of ensuring safe train spacing by reserving a series of long fixed blocks behind a train, a moving block system creates a dynamic buffer zone between it and other trains in the system — allowing them to be safely spaced much closer together. 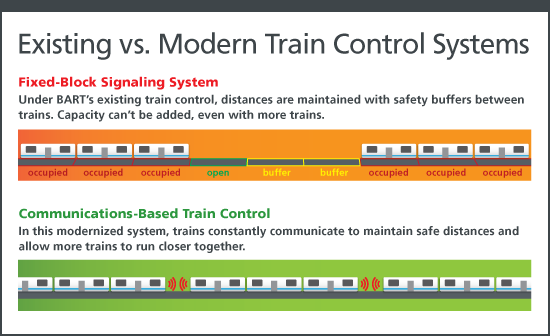 Shifting to this newer technology instead of rehabbing the old system offers a long list of advantages including less equipment, lower maintenance, less energy consumption, and a more comfortable ride for passengers because the trains will decelerate more gradually than they do in the current system.  Those herky-jerky movements a rider feels when a train is coming to a stop are often caused by the train control system because there are periods of braking mixed with plateaus of constant-speed travel.

"Passengers will be able to feel the change in the way the trains slow down," Dunscombe said. "It will be a smoother ride.  Also, software algorithms will allow the system to recover from a delay if service falls behind schedule."

The new system will be fine-tuned to allow trains to move more closely together, with controls for safety.  With increased accuracy and more granular coverage, the new system will enable trains to travel closer together, not just speeding trains up when need be but also allowing more trains to be on the system at any one time – providing more capacity that’s desperately needed on crowded trains and platforms.

Riders will benefit from a 25% increase of trains travelling through the Transbay Tube per hour during the peak commute with CBTC.

PAYING FOR THE NEW SYSTEM

The project to replace the system is estimated to cost $915 million.

A multifaceted funding plan is needed to pay for the system.  Grant money from the federal, state, and regional governments is being pursued and the BART Board of Directors is considering placing a bond measure on the November 2016 ballot that could help fund replacement of the old system. The BART draft bond plan proposes $400 million to modernize our train control infrastructure.  BART riders are also paying towards a new train control system with their fare dollars.  The biannual inflation based fare increase program dedicates fare increases to BART’s top three capital projects: a new fleet of train cars, a new maintenance facility and the new train control system.

BART is targeting mid-2018 to award the contract and then it will take about eight years to fully design and install the system.  The project will start on a test track to prove the new technology and then be phased into BART service with the ability to start running more frequent train service through the Transbay Tube in late 2023.