“We’ve been working on the arrival of BART to this part of the Bay Area for years, so it’s both thrilling and a bit surreal to finally be here aboard these amazing new vehicles,” said BART Director Joel Keller. “We couldn’t have made BART to Antioch happen without the long-term dedication of East County residents, and the commitment of the many leaders at the local, regional, state, and federal levels who came alongside us to help turn this visionary project into reality.” 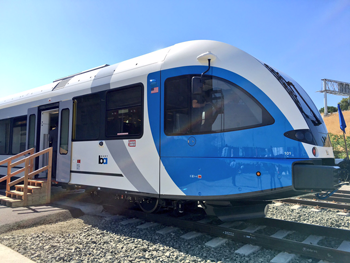 The new train cars will run on separate tracks extending past the existing Pittsburg/Bay Point Station, and are a different type than those arriving in BART’s new Fleet of the Future.  This Diesel Multiple Unit (DMU) was chosen to bring rail service to East County residents while remaining cost-effective; the $525 million, 10-mile extension to Antioch is 60% less expensive than conventional BART. Stations for the new service will be located along Highway 4 near the Railroad Ave. intersection in Pittsburg and the Hillcrest Ave. intersection in Antioch, with all eight new vehicles set to arrive by this December prior to a year of state-mandated testing for safety and functionality.

The new train cars, rated the most environmentally friendly out of all diesel-powered trains, will be able to move an estimated 2,400 people per hour during commute times, and boast a variety of amenities including six digital signs per vehicle (with multiple language support), automated audio announcements, clear station arrival / destination signage, and modern climate control systems.  Daily ridership of the BART extension to Antioch is expected to exceed 10,100 by 2030 through the Highway 4 corridor, with an initial expected daily ridership of 5,600.

BART to Antioch is part of the nearly-complete Highway 4 Widening Project, which expands Highway 4 from four to eight lanes between Loveridge Road in Pittsburg to just west of State Route 160 in Antioch, and from two to four lanes from Lone Tree Way in Oakley to Balfour Road in Brentwood.  The project provides greater mobility and access to multi-modal transportation, not only expanding lanes and building missing connector ramps at the State Route 160 interchange, but also providing funds for BART to Antioch.

The project has been carefully staged to keep the daily traffic of 130,000 cars moving, even as major construction and demolition work continue.

"The arrival of these new BART vehicles and the beginning of testing is a visible reminder of the progress being made to further economic growth and improve access to jobs and vital services for East County’s 250,000 residents,” said Dave Hudson, Chair of the Contra Costa Transportation Authority. "The Highway 4 Widening and BART to Antioch projects would not have been possible without either the backing of Contra Costa voters in 2004, or the help of partner agencies. We look forward to continued public support for additional innovations and improvements on the Highway 4 corridor in the future.”

Average travel time between stations is expected to be seven minutes between Antioch and Pittsburg Stations, and three minutes between Pittsburg and Pittsburg/Bay Point Stations.  The new stations will use the same BART fare collection machines and gates used elsewhere in the BART system, with full service set to begin in 2018.