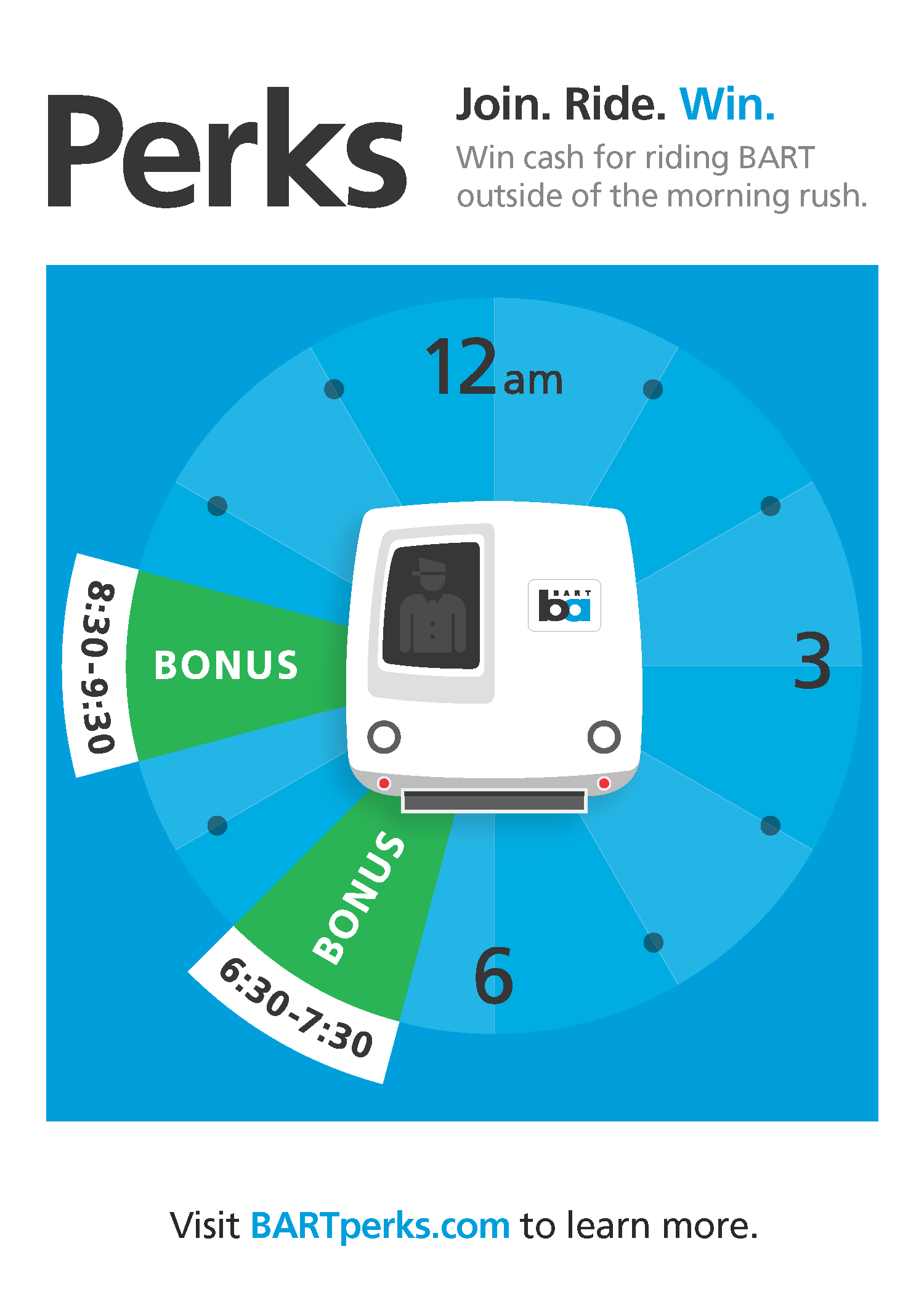 BART riders now have the chance to win cash rewards by participating in a 6 month test program that incentivizes riders to shift travel times away from the peak morning hours.

“BART Perks” - offered by BART and the San Francisco County Transportation Authority - is based on successful implementation of similar programs around the world.

The program complements BART’s long-term efforts to reduce crowding and congestion on trains and in stations, including upgrading train control and other major system infrastructure, adding more trains to the fleet, and expanding station capacity.

The program works this way: BART riders who opt into the program will automatically earn 1 point for every mile traveled on BART. They can earn up to six times as many points by starting their trip during a bonus hour: 6:30 A.M. to 7:30 A.M. or 8:30 A.M. to 9:30 A.M. Points can be exchanged for small cash rewards or used to play the “Spin to Win” game for the chance to pick up additional points or random cash rewards from $1 to $100. Each month, reward balances will be transferred to participants’ PayPal accounts.

Participants sign up for the program at BARTPerks.com using their email address and Clipper Card number.

The BART Perks program launched August 30, 2016 and seeks to attract at least 10,000 participants over the next 6 months.

“Our goal is to see if we can shift riders to less crowded times, which will improve everyone’s experience on BART,” said BART Board Director Gail Murray, who championed the research program after hearing about the success of a similar program in Singapore. “It can also improve BART’s on-time performance during the rush since trains will have shorter dwell times at each station due to less crowding.”

If just 1,200 people shift their BART trip outside of the morning rush each weekday, BART is able to relieve the equivalent capacity of a 10 car train, making more room for those who cannot shift during BART’s busiest hour.

The data resulting from this test will be useful in determining how much BART riders are willing to change their arrival and departure times, if provided an incentive.

“San Francisco supports BART’s efforts to pursue the full range of solutions - from new vehicles, to improved infrastructure, to incentive-based technology programs - to address the tremendous growth we are seeing in transit demand,” said San Francisco Supervisor Scott Wiener, who chairs the San Francisco County Transportation Authority and serves on the Metropolitan Transportation Commission. “The capacity constraint in the Transbay corridor is urgent and BART Perks is an innovative and cost-effective way to address crowding in the near term as we work on longer-term solutions. Ridership has grown 30% on BART system-wide and 43% in the Transbay corridor since 2010.”

“Based on positive experience in Singapore, we are keen to test the ability of incentives to ease conditions in BART’s congested core,” said Tilly Chang, Executive Director of the San Francisco County Transportation Authority, which serves as the congestion management agency for the county. “Using data analytics and easy-to-use mobile web sites, we hope to gain deeper insight into how demand management strategies like incentives can help us nudge traveler choices and improve operations for the system as a whole.”

During the 6 month pilot, BART Perks is targeting East Bay BART riders who travel during the peak morning commute to either Embarcadero or Montgomery stations, which are the system’s busiest during weekday mornings. But all BART riders can participate until a maximum of 25,000 participants has been reached.

During the pilot program up to $50,000 will be awarded each month, depending on enrollment. The program is funded through a federal grant, BART operating funds, and San Francisco’s half-cent sales tax for transportation.

Key to making the pilot program a success will be robust engagement with employers located close to downtown San Francisco BART station to encourage flexible work schedules. BART and the Transportation Authority are offering technical assistance and extra rewards to employers who sign up to be BART Perks partners.

“The Federal Highway Administration encourages innovative solutions to managing congestion,” said Robert Arnold, FHWA Director of the Office Transportation Management, which is a major funder of the project. “We commend BART and SFCTA for developing a collaborative approach with employers and riders to utilize BART capacity more effectively throughout the day.”

The 6 month program is facilitated by Urban Engines, a Bay Area-based company. After the conclusion of the program, SFCTA and BART staff will evaluate the results and determine whether future programs of this kind should be pursued. If BART chooses to implement a permanent program it would need to rebid a contract and identify funding sources.