On Sunday, October 9, 2016, at 11am, BART and City of Oakland and Berkeley officials will hold a ceremony and community event at the Rockridge BART Station to commemorate the 25th Anniversary of the 1991 Oakland and Berkeley Hills Firestorm.  The event will include an unveiling and rededication of the memorial plaque listing the names of the 25 people who lost their lives and a phoenix rising out of the flames that currently hangs at the station but after years of exposure deserved a brightening.

The Oakland and Berkeley Fire Chiefs will lead a reading of the names and bell-ringing ceremony.  The event also includes a musical performance by Fire Captain Larry Sampson and resident Zeal Levin (5 months old at the time of the fire), the BART Police Honor Guard, and remarks by Oakland Mayor Libby Schaaf, BART General Manager Grace Crunican, Rockridge District Association President Susan Bernosky, and Fire Survivor Rachel Lomax, the creator of the first tile on the Firestorm Community Mural Project.

The Rockridge BART station is home of the mural that includes more than 2,000 tiles hand painted by community members to remember and honor the people and pets who died, items left behind, and other personal images.

After the ceremony, the Rockridge District Association will host its 10th Anniversary Rockridge Out & About street fair.  Free to the public, highlights include live music in multiple locations, a lively picnic hosted by the famed Market Hall European-style marketplace, gourmet food from area establishments and mobile food vendors, scores of artisans, and tons of fun for the kids. The festivities run from noon - 6:00 pm along a 12-block stretch of College Avenue. For more information, visit www.rockridgeoutandabout.com. 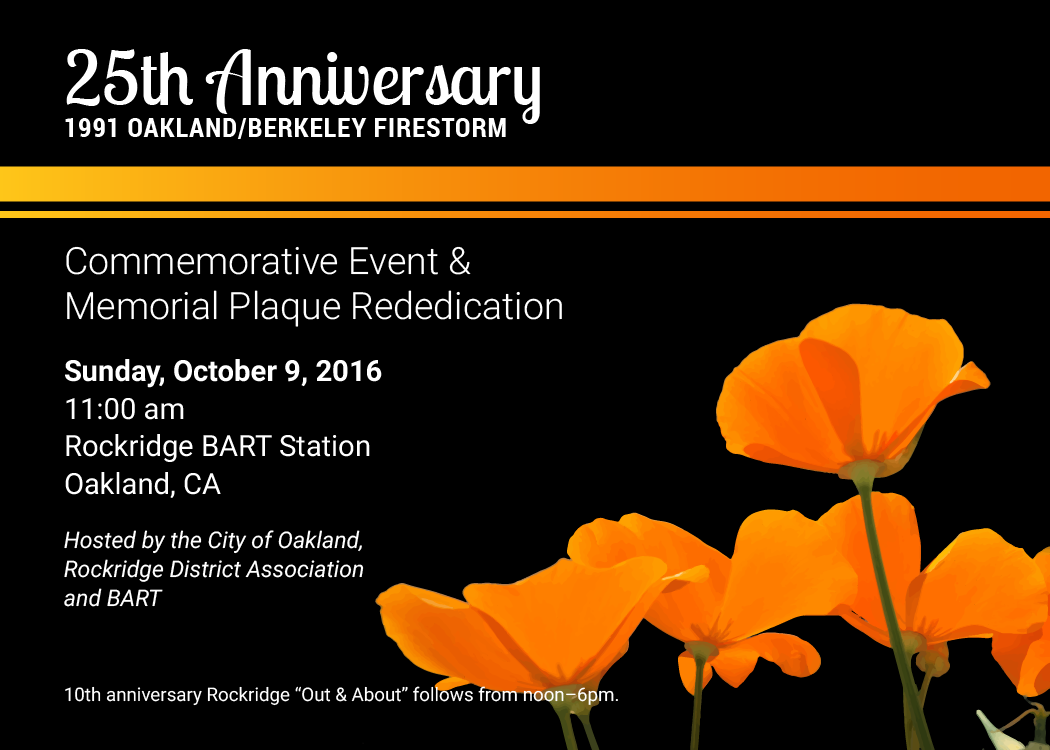