A BART platform like the one at Fremont Station can be swamped with sounds: cars rushing by on nearby roads; wind whooshing through; bystanders talking.  Cutting through the clamor in order to hear important announcements can be challenging even for those with perfect hearing.

It's even tougher for the hard-of-hearing riders who use hearing aids amid that cacophony of sounds. Through a pilot project, BART is working with the hearing-loss community on new technology that could make a big difference.

The technology is called a hearing loop and it's being installed at Fremont Station with completion expected later this spring. Riders who use most typical modern hearing aids, which employ something called T-coils, will be able to toggle a switch on their hearing aids to get a much clearer, isolated sound of announcements made over the public address system, or interactions with the station agent.

"It's like wifi for your ears," said Richard McKinley, managing director of Contacta Inc., which is the contractor’s vendor supplier on the pilot project.

Carl Orman, project manager for the installation, said the idea came through collaboration with the BART Accessibility Task Force (BATF). Orman also is BART’s accessibility program manager in the Office of the District Architect.

"We're trying to improve the situation so people can better hear and understand what’s going on in the noisy, environment,” Orman said. "This is a pilot so we're going to experiment and see how things go." To set up the loop, grooves were cut into the platform surface; wire was laid in the grooves and sealed over to transmit the electromagnetic signal that is picked up by the T-coil in the hearing aid.

Janice Armigo Brown is a member of the Accessibility Task Force and uses a hearing aid with T-coil technology.

"In public transit situations such as BART, noise can be a huge factor," said Brown. "People with hearing loss rely on visual cues such as lip-reading to compensate for or 'fill in the blanks' when communicating with Station Agents, transit personnel or other riders when asking questions or obtaining vital information," she said. "Any added background noise can prevent a person with hearing loss from understanding or deciphering speech."

Brown explained how it can be especially stressful when there are special announcements conveying non-routine information. 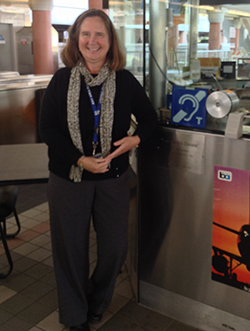 "I look at facial expressions from transit riders for cues-- frightened look on face, disgruntled look on face or possibly a frustrated eye motion -- to make sense of what has been said," she explained. "Sometimes, suddenly I feel a bit tense as I do not know what is happening. Is it an emergency or safety concern? Is it something such as a track or work delay announcement that I should hear and respond to such as tell a family member, friend or co-worker that I will be delayed? The truth is that I do not know what has been communicated so I am unaware of how to respond. The ‘not knowing’ is most frustrating, and thus, the situation can be stressful."

It's like your own "personal sound system" that eliminates background noise and funnels the sound directly into the assistive device, she said.  "Riders with access to the hearing loop system can feel more assured of receiving important information without straining to understand and decipher what is being said; however, users will still have to factor in different tones, voice volume, speed of speech and/or an accent."

Brown said making riders aware of the technology will be important. Once it is up and running, BART will invite riders who use T-coil hearing aids to test the pilot project and give feedback. Some users including Brown, pictured above at right, already gave feedback earlier when a more limited demonstration project was tested at Colma Station. To find out when testers are needed for the Fremont project and get on the list, contact Orman at corman@bart.gov

Also, hearing-aid users may want to check the settings on their device; a toggle to the T-coil only mode may be needed to isolate the correct sounds. There will be pictogram placards placed in the area indicating that hearing loop technology is available.

Juliette Sterkens, an audiologist based in Wisconsin, is the hearing loop advocate for the Hearing Loss Association of America (HLAA). “In the T-coil-only mode a person can isolate the sound that is coming through the hearing loop, which is particular advantageous in a place with a lot of background noise,” she said, adding that some newer hearing aids can be adjusted by a smartphone app. “The hearing aid industry is responding to hearing loop technology as it becomes more widespread,” she said.

Indeed, hearing loop technology will also be among the capabilities of BART’s Fleet of the Future. BART is working with train car manufacturer Bombardier to develop and test an induction loop system for BART’s new fleet. If the testing goes well, this system will transmit audio announcements and other BART information directly to receptive hearing aids and cochlear implants while riding in the new fleet – a much more comprehensive deployment, for which the Fremont pilot project is another step in laying the foundation.

BART customers who use hearing aids and/or cochlear implants with T-coils will be invited to try out the new onboard system and provide feedback.  (Note: those who might be interested in participating can send an email to bartresearch@bart.gov.)

Hearing loss affects people of all ages, and it's on the rise. Various studies have looked at reasons why; one theory is a negative impact from the nearly ubiquitous use of earbuds, often at high volumes, by people listening to music or using their devices for speaking.

While the hearing loop is a promising new technology, it cannot be the solution for all riders with hearing loss, said Dr. Ike Nnaji of BART's Customer Access Department, and liaison to the BART Accessibility Task Force. For the profoundly deaf or those who do not use hearing aids, alternative delivery of information remains the textual messages that are displayed on the station information signs.

BASIC FACTS AND THINGS TO KNOW ABOUT HEARING LOSS

* About 20 percent of Americans, 48 million, report some degree of hearing loss.

* 60 percent of the people with hearing loss are either in the work force or in educational settings.

* Hearing loss is a major public health issue that is the third most common physical condition after arthritis and heart disease.

* Gradual hearing loss can affect people of all ages -- varying from mild to profound. Hearing loss is a sudden or gradual decrease in how well you can hear. Depending on the cause, it can be mild or severe, temporary or permanent.

* Hearing loss is an invisible condition; we cannot see hearing loss, only its effects. Because the presence of a hearing loss is not visible, these effects may be attributed to aloofness, confusion, or personality changes.

* Sudden, noise-induced hearing loss from gunfire and explosions is the number one disability caused by combat in current wars.