Train operators are a critical part of the team that keeps BART moving around the Bay.  The system may be automated but the operators are the eyes and ears of the trains.  It’s an important job but a sense of humor can still come in handy.  In our latest edition of “Hidden Tracks: Stories from BART” we take a ride with Bob Malito, who is better known as Captain Jack to tens of thousands of riders who take BART between Pittsburg/Bay Point and San Francisco International Airport.  Malito is well known throughout the system for his funny station announcements.  Listen as Malito describes the challenges of his job and how he comes up with some of his best material. 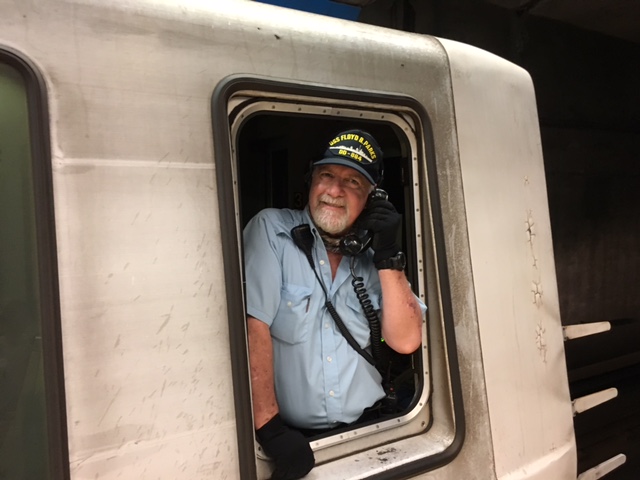 HOST: “If you’ve ever ridden on one of his trains, it’s a memorable experience.”

MALITO ON TRAIN SPEAKER: “Welcome aboard all y’all this San Francisco train.  Shifting gears and cruising kind of slow as we take that low ride into Pleasant Hill.  Now arriving Pleasant Hill Station.”

HOST: “Many of his riders know him as Captain Jack.”

MALITO ON TRAIN SPEAKER: “All right, kick back, relax and enjoy Captain Jack’s tour of the Bay as we set sail for the city and that Embarcadero Station.”

HOST: “His real name is Bob Malito and he’s one of the most popular train operators working for BART.

I recently had the chance to sit down with Bob to learn more about the man behind the funny one liners that have entertained thousands of BART riders. 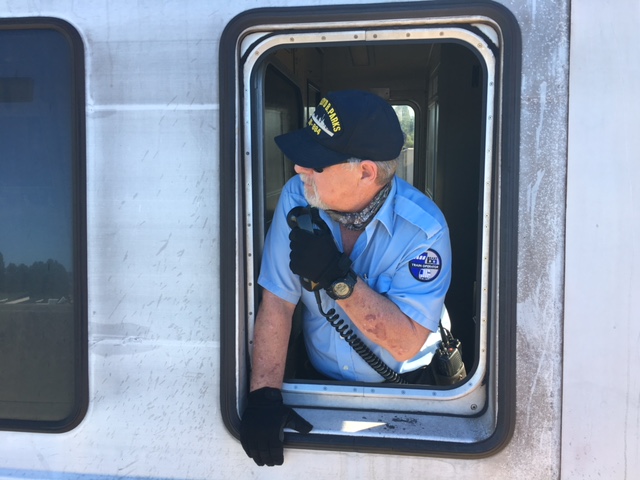 You come to this job after a lot of experience working in the railroad.  Tell me your path, what brought you to BART in the first place?”

MALITO: “I had separated from the railroad after 33 years and I was looking for something else, I needed something and I was trying to sell insurance.  Found out I’m not an insurance salesman and my daughter had a friend that worked down here and he said they were hiring train operators since I was an engineer probably be a great fit for me.  So I took the test and I was able to pass, take the training and be a train operator.”

HOST: “How has that gone for you so far?  You’ve been here, it sounds like about 10 years?”

MALITO: “I’ve been here 13 years now.  It’s been great, being a train operator is a wonderful job.”

HOST: “Tell me a little about that in terms of your day-to-day job.  What kind of responsibilities do you have?”

MALITO: “Well I have responsibilities for the train.  If anything goes wrong on a train I’m supposed to know about what to do to fix it.  They have a lot of techs out on the line now where you call it in and the tech will try to meet the train and take care of your problem.  But there are times when you’re stuck somewhere there’s nobody that can get to you, you have to handle it.  And you have to know the ins and outs of the BART equipment, how to reset things how to set things right to get the train moving.”

MALITO ON TRAIN SPEAKER: “We be dropping down into the valley of Orinda.  Now arriving Orinda Station.”

HOST: “As train operators you have some tough stuff to do.  I mean sometimes you have to go out there and crank a switch and I don’t think people understand that.  What is that like?”

MALITO: “Cranking a switch is, sometimes it’s not so bad but there are places in the system where it’s really difficult.  Like at the airport it’s about a 10 foot drop down from the BART car to the trackway.  Then you go line the switch then you have to find a way to climb back into your train.”

HOST: “What’s some of the most crazy, most concerning stuff that you’ve come across in your time at BART?”

MALITO: “A lot of weird things.  People will do strange things to get on the train and I’ve got a train right behind me, they can see the headlights but they still want to get on this train.  It makes it difficult to get the train down the road.  Sometimes I have to close the door on people and they don’t like it but you can only take so many people and we can only stay so long because we have another train right behind us, people want to go.  So I do what I have to do to keep the train moving.

What is most disconcerting is when people play with the train.  I’ve had people come and act like they’re going to jump in front of my train and they jump up and down and laugh and think it’s really funny.  They don’t realize what it does to me.  The idea of running over people doesn’t sit well.  A lot of people have never had that experience, I have and it doesn’t make you feel very good at all and it ruins the rest of your day.  I’d really like people to respect trains because they’re nothing to play with.”

MALITO ON TRAIN SPEAKER: “Blue sky and our magic carpet ride as we drift on in to West Oakland.  Now arriving West Oakland Station.  Patrons that had a problem with the smoker we have a BART supervisor on the platform who is going to come and try to take care of the situation.”

HOST: “Little things can go a long way I think sometimes.  People are stressed, they just want to get home, they’re tired, they’re cramped in these cars especially during the afternoon commute.  Your announcements kind of add some levity for folks.  How long have you been doing the fun announcements?”

MALITO: “I started the announcements about maybe two years into my employment.  Just saying ‘we’re at North Concord this train goes to the airport,’ that got really boring to me and a lot of people just didn’t hear that.  What I found out is if I put a little intro into it people ‘what’ and then I say where we’re at or where we’re going people get it, they hear it.  So it was a way to kind of get people to listen to me and I try to invent different things.  I plagiarize the heck out of people that write and sing and do movies, I plagiarize all their stuff, I admit it (laughter).  But it’s good stuff and I try to keep it fun and try to keep it short.  I don’t want to make any long announcements because people get tired of hearing me talk.  I try to keep it short and sweet.  Give them some information and try to be something light and a little bit funny where it’s not so serious and maybe they can relax on their way home or wherever they’re going and give them a better day.  I did have one experience with a gentleman and it really moves me.  I was on my way to Fremont and I was doing my thing just having fun and cutting up.  This guy came up to my cab and he says ‘man, I want to really thank you for your announcements you really brighten my day.’ I said ‘well, you’re welcome sir enjoy the rest of it.’  He said ‘no, you don’t understand.  You see I just lost my job, I lost my house, I lost my vehicles, my wife divorced me and moved away and I was thinking about going home today and committing suicide.’ (sobs) He told me ‘you know what you reminded me it’s a temporary affliction, I don’t need to do a permanent solution for it, thank you very much.”

HOST: “That’s amazing and I mean that makes you emotional today.  What a moving experience.  That’s incredible how you can impact people and you see it directly.”

MALITO: “Yeah, and you know it’s nice when people wave at me when they get off and they come to me and say ‘it’s great seeing you,’ and you know that makes my day, I really like that.”

MALITO ON TRAIN SPEAKER: “Up and over the hill onward to Orinda.”

HOST: “Do you practice the lines before you get in the train or does it just kind of flow out of you?”

MALITO: “I just kind of run it through my head a couple of times right before I’m going to say it to try and figure out how I’m going to say it or what I’m going to say and then when I get something that works I’ll file it away and use it once and a while here and there.  I’ve had a lot of people leaving the airport going back home and like ‘hey that was great we don’t hear that stuff back home, that was great, that was nice, thanks for the ride’ and ‘hey, enjoy your flight, see when you get back into town.”

MALITO ON TRAIN SPEAKER: “Making like a herd of turtles as we race off for 12th Street Oakland City Center.”

MALITO: “Yes I was.  I was a Vietnam combat veteran.  I signed up for six years for submarine duty, nuclear power electrician and I was a high school dropout.  I took all the tests, I went through all the schooling electronics, electricity and all of that stuff and I got ready to go to nuclear power school. They said ‘you know you’re right at the 1/3 cutoff point so you have a choice: you can either go to nuclear power school or you can go to the fleet.’  And all these guys going to nuclear power school they’re all college grads and they’re working with slide rulers before we had calculators and I’m thinking ‘man, these guys are sharp, I need to do a little training before I try to hand with that kind of company so I told them I want to go to the fleet.”

MALITO ON TRAIN SPEAKER: “On the soooouuul train heading in toward MacArthur Station.”

MALITO: “I just want the passengers that ride the trains to know that our job here is to get you safely to where you want to go.  We have a lot of difficulties in doing our job a lot of things happen behind the scenes that we have no control over.  Sometimes we have some bad passengers that cause problems and our trains get stuck because we have to wait for BART Police to show up and take care of the situation.  People get sick, people get injured and we’re not just going to keep going.  We’re going to get that person medical assistance.  We’re here to help you, we’re here to help you get home safely and we hope you enjoy the ride.  Certainly a lot better than being on that freeway.”

MALITO ON TRAIN SPEAKER: “For those of you leaving us at Lafayette, it’s time to pack your bags and head for the door.”

HOST: “Thanks to Bob Malito and thank you for listening to “Hidden Tracks: Stories from BART.”  You can listen to our podcast on SoundCloud, iTunes, Google Play, Stitcher and of course at our website, BART.gov/podcasts.”