Go inside the Wheelhouse for BART to OAK

Go inside the Wheelhouse for BART to OAK 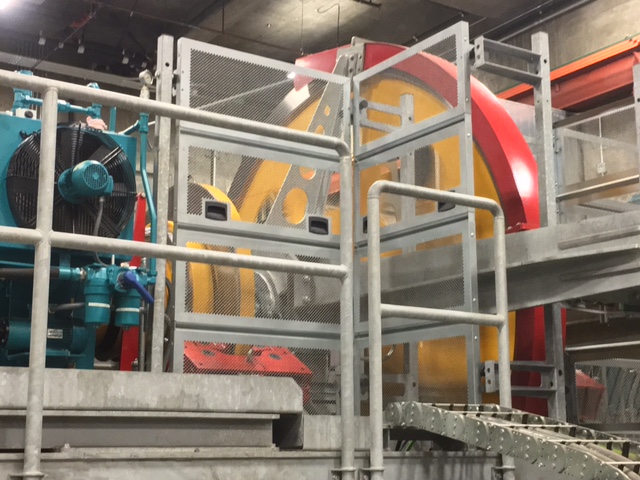 Getting people between Oakland International Airport and the Coliseum Station quickly and safely is right in BART’s Wheelhouse.  On this edition of "Hidden Tracks: Stories from BART" we’ll take a look behind the scenes at the Wheelhouse, the hub of activity for BART to OAK.  The ride is smooth and quiet but there’s no mistaking the sound when you go inside the Wheelhouse.  It's a cavernous building made of concrete with more than 18-inch thick walls.

The 3.2-mile extension relies on state-of-the-art equipment but it also uses technology that traces its roots back to the 19th century.   Learn more about BART’s Wheelhouse with the Superintendent of Operations for BART to OAK, Mike Forte.

HOST: “Getting people between Oakland International Airport and the Coliseum Station quickly and safely is right in BART’s Wheelhouse.

Welcome to "Hidden Tracks: Stories from BART.”  On this edition of Hidden Tracks we’ll take a look behind the scenes at the Wheelhouse, the hub of activity for BART to OAK.  The ride is smooth and quiet but there’s no mistaking the sound when you go inside the Wheelhouse, a cavernous building made of concrete with more than 18-inch thick walls.

The 3.2-mile extension relies on state-of-the-art equipment but it also uses technology that traces its roots back to the 19th century.

The Wheelhouse, also known as the Doolittle Maintenance and Storage Facility, is midway along the line.  It’s where operations for BART to OAK are managed and as the name implies, is home to four large drive wheels that keep the cable system working.

To learn more about BART’s Wheelhouse, I spoke with the Superintendent of Operations for BART to OAK, Mike Forte.

Mike it’s a pleasure to talk to you and get to learn about this system that’s a little bit different from the rest of the BART system.  Let’s start there, talking about the Wheelhouse and you were just showing that off.  I mean there are four large wheels in there obviously our riders are not going to get a chance necessarily to see those in action but tell me what’s happening in there and kind of describe it for folks.” 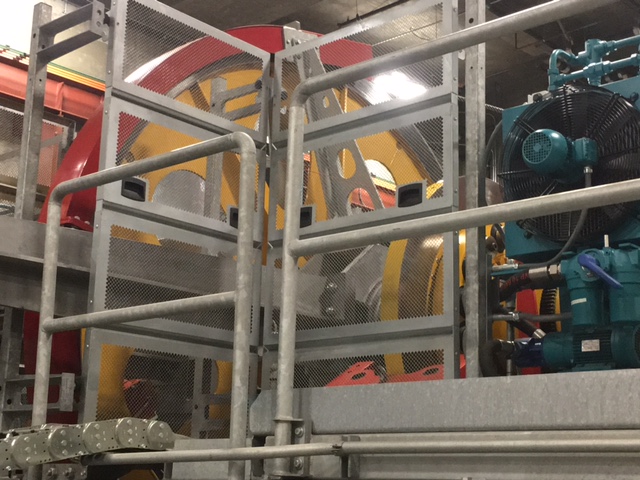 HOST: “And as we heard it is loud in there.  There’s a lot of power that plays an important role in how the system works and we should point out BART to OAK operates on a cable system.”

FORTE: “That’s right it’s similar in ways to San Francisco’s MUNI cable car, our beloved cable car system in San Francisco, but it’s a lot different in other ways.  Where this one is completely automated and driverless and that one is manually operated for the most part.”

HOST: “It’s an interesting blend isn’t it because we’ve had cable cars around for years and years, decades and decades and yet obviously modern technology is at play here.  Tell me a little bit about that.”

FORTE: “Absolutely.  We have a very advanced train control system that monitors all aspects of all the equipment.  We have sensors for every piece of equipment to tell us the voltage going into it, the temperature, vibrations, you name it.”

HOST: “Tell me a little bit about the decision that was made.  Why have a cable system here instead of regular BART or something else?”

HOST: “Well we had a competition when we were trying to decide what to use here.  We wrote a specification or a design build specification that allowed for various technologies and in weighing the three competitors that we had we felt that cable would give us the most bang for the buck in terms of operational efficiency, simplicity and cost effectiveness.” 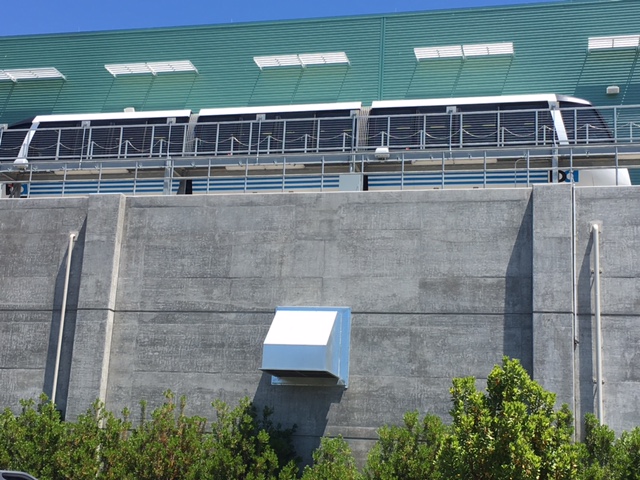 HOST: “What’s the experience for the passenger, what’s their ride like?”

FORTE: “Well for me as a passenger it’s pretty pleasant.  It’s relatively quiet inside, the most you can hear is the air conditioning units that are blowing constantly.  The ride is comfortable it’s not jarring.  It’s very smooth it has an air bag suspension, very smooth and comfortable.  We get passenger feedback occasionally and it’s all been positive.”

HOST: “One thing that’s interesting about this set up too is it’s actually, we have a contractor that’s operating this system for us.  Tell me about that and how that’s going in terms of; I know the on-time especially is really, there are very high standards there.”

FORTE: “Yes.  We have a 20-year operation and maintenance with Doppelmayr Cable Car to operate this.  It’s an incentive based contract so the better they operate the more they can make.  They gave us a lump sum price for operation for a year and it’s escalated by inflation every year.  They get 100% of that payment if they meet a certain availability standard of 99.5%.  If they go higher than 99.5 there’s some incentive built in up to a 2% bonus.  If they go lower than that there’s a disincentive built in, they get less money up until the point where if they go down to, if I remember correctly, if they go to 98% or below it falls off pretty dramatically and there’s a point where they don’t get any money if they fall too far.”

HOST: “I’m speaking with Mike Forte who is the Superintendent of Operations for BART to OAK.

One of the comparisons I thought of as we were walking through the wheelhouse was that of a gondola going up the mountain.  Obviously not the swaying, but there is a Wheelhouse and it’s a cable system.  Do you think there’s something to that comparison?”

FORTE: “Yes, actually the manufacturer of this system manufacturers gondolas all over the world.  That’s their bread and butter they have over 10,000 gondola systems.  There are a lot of similarities: the cable obviously, a smooth ride, the big difference is we are on a track versus a gondola which is suspended by a cable, fortunately we don’t have that here." 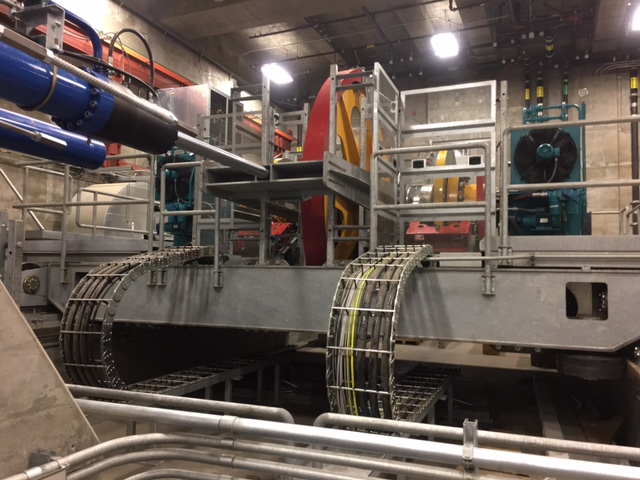 HOST: “Don’t have to worry about those winds or anything like that.”

FORTE: “Yup, none of those problems.”

HOST: “And part of this route actually goes underground as well.”

FORTE: “Yes, we have three different types of guideway.  We have an elevated, which is the majority of the guideway, you can see the track if you drive down Hegenberger Road it will be above you.  We go under Doolittle Drive and then we are at grade for a point along the front of the runways at the Oakland Airport.”

HOST: “Of course for passengers as they’re coming along, say they’re at the Coliseum Station going over to the airport, they will actually pause here briefly at the wheelhouse.  I know that catches some of them by surprise.”

FORTE: “It does.  I’ve ridden in the train just as a casual observer and I can overhear people talking about ‘hey why are we stopped here?’  What’s going on there is we have four ropes in a four-rope loop situation or condition and the train is switching from one rope to the other.  There’s about a 20 second pause when that’s going on.  But if you’re riding the train don’t be alarmed, that’s part of the normal process.” 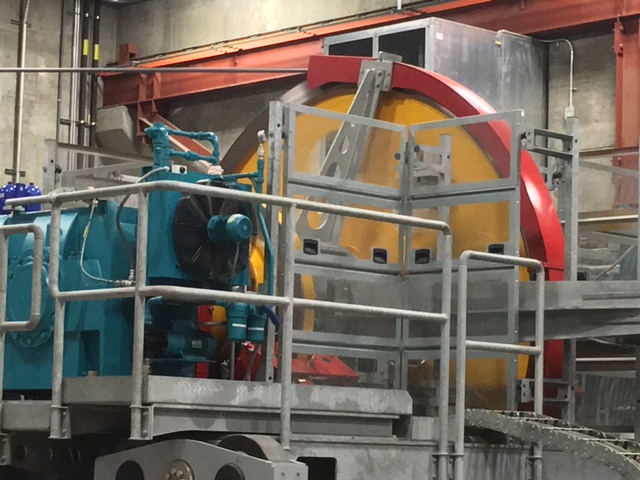 HOST: “Now there are four trains in the system and they’re going back and forth all day, you’re operating on a cable system here.  Are there any challenges to maintaining the system?  What kind of work goes on to make sure that everything continues to work properly?”

FORTE: “The cable rides in along the guideway in sheaves and there are over a thousand sheaves, I don’t remember the number.  Those need constant attention.  They need inspection, occasionally they need replacement.  It’s like painting the Golden Gate Bridge, you start at one end go to the other and start over again.  They need constant replacement and maintenance.”

HOST: “And you mentioned the contractor makes gondolas all over the world and we’re very familiar with cable cars here in the Bay Area.   Are there any transit agencies you’re aware of in the U.S. that are using this sort of system or looking towards this kind of technology?”

FORTE: “In the U.S. the cable technology is used in Las Vegas there are two or three cable systems there.  I can’t recall any other ones in the U.S.  I know Toronto airport operates one.  Doha has recently opened one and Caracas, Venezuela has a system that is very similar to the OAC’s.”

HOST: “So still relatively rare and certainly not everywhere and it seems like it’s been working fairly well for BART.  Would you say that?”

HOST: “I’m just trying to quantify that in my head with trains going back and forth I mean how many trips is that?”

FORTE: “You know I’ve been asked that question and I never stopped to count it.  But we run the same hours as BART 4:45 in the morning to around 1:15, 1:30 at night, so we’re almost, what is that 20 hours and three trains running almost that entire time.”

HOST: “A very reliable service.  Obviously, a lot of folks who take the service are from out of town, visitors that sort of thing because they’re going back and forth between the Coliseum and the airport.  If there was one thing that you wanted passengers to know about this system that maybe they don’t what would what you say that is?”

FORTE: “Well you don’t have to mess with the traffic, that’s the reason I would take it to the airport.  You can jump on BART at any of BART’s stations.  Take BART to the Coliseum Station and transfer to this Oakland Airport Connector train.  It’s a seamless transition. You have one fare card your BART ticket or your Clipper pass and transfer from one train to the next and you’re there.”

HOST: “Mike, it’s a pleasure to talk with you thank you so much.”

FORTE: “Thank you very much for coming here.”

HOST: “And thank you for listening to Hidden Tracks: Stories from BART. You can listen to our podcasts on SoundCloud, iTunes, Google Play, Stitcher and of course at our website at BART.gov/podcasts.”