BART police have arrested a juvenile suspect for a cellphone robbery that was reported at the Rockridge Station in Oakland Monday night.  This is just the latest arrest made by BART officers as the agency cracks down on cellphone thefts.

Just after 7 p.m. Monday, August 14, 2017, the victim reported a male juvenile grabbed his phone out of his hand and ran off with two other male juveniles at the Rockridge Station.  BART officers responded and were able to detain two of the juveniles.  The victim identified the suspect who took the phone.  The suspect eventually directed officers to the phone, which had been discarded and it was returned to the victim.  The suspect has been booked into juvenile hall for robbery.

This latest arrest comes as the BART Police Department has stepped up its efforts to provide a visible presence in the system.  Officers are working overtime and a special anti-robbery team is being deployed at various stations as a deterrent against cellphone thefts and other crimes.

There has been a total of nine thefts involving electronic devices in August. There were 24 in July. Both tracking down from a March high of 58.

BART has launched a public awareness campaign against cellphone thefts to ensure riders know these thefts are taking place.  The effort encourages riders to be more aware of their surroundings.

The campaign includes regular audio announcements on trains and in stations.  A message has been placed at the bottom of BART Service Advisories that are emailed to subscribers. BART has also developed an awareness poster for inside train cars that is translated into multiple languages.

The campaign encourages riders to protect their phones by keeping them secure, especially near train doors and while waiting on platforms. 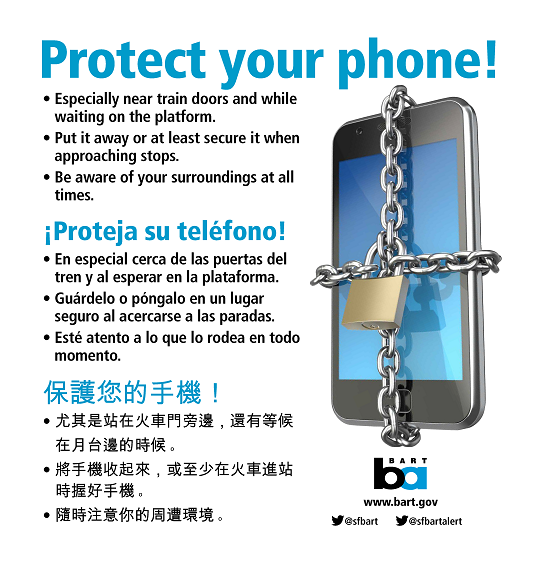