BART PD serves up coffee and conversation in San Francisco

BART PD serves up coffee and conversation in San Francisco 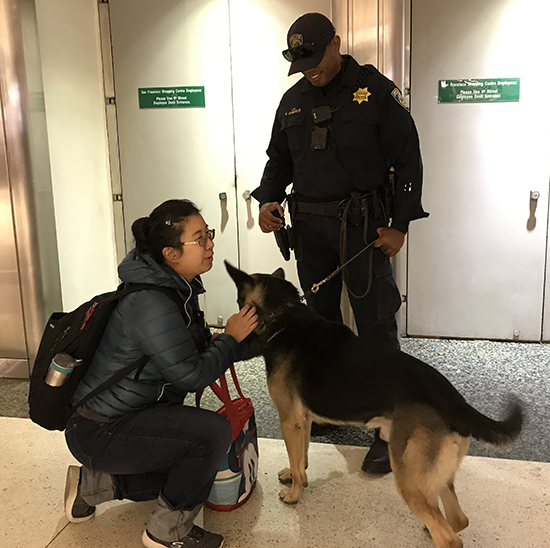 BART Police took part in National “Coffee With A Cop” day on Wednesday, Oct. 4, serving up a warm cup to customers in the free area at Powell Station while discussing safety and security initiatives.

An effort started in 2011 in Southern California, National “Coffee With A Cop” day aims to bring officers closer to the communities they serve and to foster dialogue.

Dozens of customers breezed by in the two-hour meet-and-greet, and by far the most popular attraction was cellphone photos with two K-9 unit dogs, Blue and Bandi.  (Blue, the German Wirehaired Pointer, also likes to dance, and showed off with his handler.)

On a more serious note, BART PD Sgt. Joel Enriquez, who was running the show, had one-on-one discussions with several customers. He briefed them on various safety initiatives already underway and more to come.

Elieen Lee, an everyday peak-hour commuter, said she did not feel unsafe taking BART. She didn’t stop by to talk about security at all – she was there to pet the dogs.

A woman named Uvie, 21, said she appreciated the police outreach, even though she is concerned about overall inequitable policing in communities of color (not specifically at BART). She said she was glad police had kept her safe in peaceful protests, protecting her right to free speech even if it was in disagreement.  She said she’d like to see more conversation and community engagement, particularly around issues such as mental health that know no boundaries.

“We’re here to build relationships, one cup at a time,” Sgt. Enriquez said.

Future “Coffee With A Cop” events will be published on bart.gov. For more information on the nationwide event visit: http://coffeewithacop.com/