When Michael Patchen trained to be a BART train operator, lessons involved mimeographed handouts, lots of lectures, and taking turns at “seat time,” learning to drive a real train in the overnight hours.

“It was a lot more primitive than what we have now,” said Patchen, who is a trainer instructing operators how to drive the new Fleet of the Future trains, expected to start carrying passengers around Thanksgiving.

Today, train operators are learning on a sophisticated simulator, a machine that can mimic almost any situation the operators may encounter, and which is loaded with hundreds of possible scenarios.

The simulator gives trainees longer stretches of seat time, since training can occur all day long, and not only in the short overnight window when trains are not running. It’s more efficient and, most importantly, creates a better learning environment.

“If you take a class out (overnight), it winds up that everybody gets maybe a half-hour of actual seat time every night, when on the simulator they can get six to eight hours in one day,” Patchen said. “So that’s like weeks of training in a very short amount of time. People are able to practice over and over again and get much, much better, very quickly.”

"People are able to practice over and over again and get much, much better, very quickly."  -- Trainer Michael Patchen 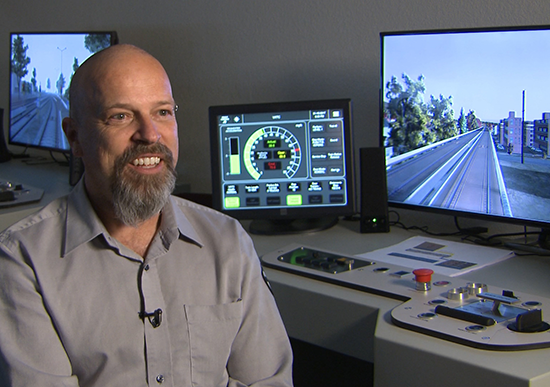 Trainer Michael Patchen in a classroom outfitted with desktop simulators

At the Hayward Training Center where the simulator is located, trainees still go through lectures, classroom exercises and studying of handbooks, because they must memorize thousands of bits of information. But they break it up with the much more realistic and interactive time on the simulator.

There are 12 mini-simulator desktop stations, outfitted with consoles that replicate the cab and where some of the simulator training takes places. There’s also a full-scale, immersive simulator that looks and feels eerily like being on a real train, right down to the noises it makes and the subtle movements indicating changing rail sections as one might find at a crossover. To a casual observer not used to sitting in a cab, you might even get queasy from the motion and intense video swirling all around you. Train operators must do it as part of the job.

“We noticed how they were able to retain the information” better with the simulator piece, Patchen said. “They seem much more solid, more comfortable, when they go out on the real trains.”

Other advantages are more efficient recertification training, which every operator has to go through every two years, and the ability to use the simulator for training on old cars as well.

“Even though it's set up for the new cars, we can actually use it to teach trainees about things that happen on the old cars, because a lot of the rules and procedures are the same no matter what kind of car you're in,” Patchen said.  “It's a little bit like teaching someone to drive a Ford by putting them in a Prius, but the rules of the road are still the same.”

While new to BART, simulators have been around nearly a century. Edwin Link developed the first simulator in the 1920s, for aviation, and it was used to train more than half a million airmen to fly planes in World War II. Larry Cathey, vehicle platform manager at Stanford University who has spent years researching simulator technology for automobiles, said simulators are an important training tool in many industries now.

"In a simulator, you can do things that you can't really do in the real world," he said, like run scenarios over and over again until the trainee masters the skill, which would be impractical with an actual train in limited overnight hours.

"It's a very complex job, and this gives you an observable, repeatable environment -- Stanford University's Larry Cathey, who researches simulator technology

"It's a very complex job, and this gives you an observable, repeatable environment," Cathey said. "You can review with your trainees and have them practice something again and again, to get comfortable and familiar with it."

The efficiency and effectiveness are noticeable with routine training tasks but become even more important when training for emergencies. The trainer can throw obstacles at the operator, such as a tree falling in the train’s path during a storm, or smoke in a tunnel.

“The good news is, these rarely happen, but with the simulator we can have the operator go through it over and over to get a feel for it,” Patchen said. “It’s much different to train for emergencies if you’re using the overnight window,” when training runs must be balanced against maintenance needs.

“With the simulator, that doesn’t matter – you’re just inconveniencing a few pixels,” he said. 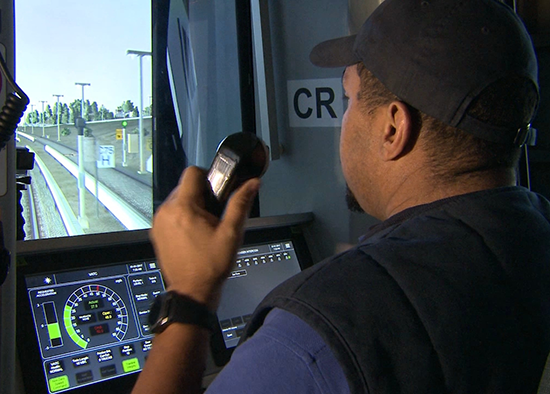 Craig Elliott, a train operator who is on a temporary stint as a trainer, agreed that the simulator is a great addition to BART’s rigorous train operator training program. “They practice over and over again, to get over the nerves, so by the time they get out there they say ‘I’ve done this already. I’ve done this a million times.’  It leads to a quicker response, knowing what to do right on the spot, because they faced it before. It’s definitely beneficial,” Elliott said.

"It leads to a quicker response, knowing what to do right on the spot, because they faced it before." -- Train operator and temporary trainer Craig Elliott

Patchen added: “What you’ll have is a more highly trained operator, somebody who’s better able to anticipate situations as they arise.”

“The way the brain works, it's much easier if you're actually doing a task than just learning about the task before you get to do it,” Patchen said. “What I've already seen is (trainees) coming out feeling more secure, more comfortable with what they need to know and what they need to do. That I think is the big, big advantage.”

Hashim Mteuzi, a train operator who has gone through the simulator training, said it won’t solve every issue, but that it’s a big improvement from the old days. (Train operators practiced then with paper sheets of a console, one-dimensional representations of the buttons, lights and levers).

Mteuzi is excited for the new trains and is hoping he might be the first driver to do a run in them with passengers.

"I work Thursdays and they said around Thanksgiving, so it could happen." -- Train operator Hashim Mateuzi, who hopes he can drive the first new train to carry passengers.

“I work Thursdays and they said around Thanksgiving, so it could happen,” he said. 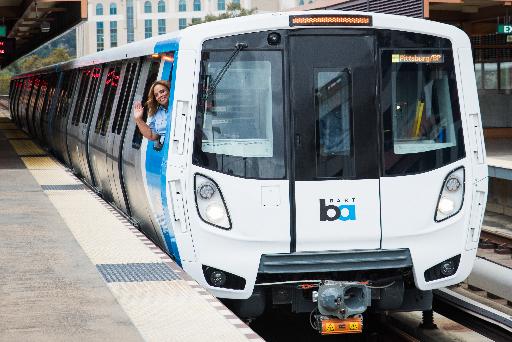 A new train on a test run, getting ready to carry passengers in coming weeks.

Sign up at www.bart.gov/alerts if you’d like to receive emails with news about the Fleet of the Future, and for more information visit www.bart.gov/cars